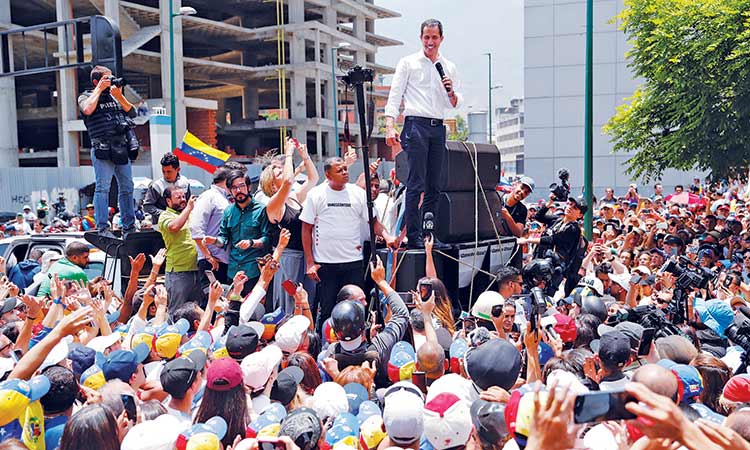 Juan Guaido addresses a rally against the government of Venezuela’s President Nicolas Maduro in Caracas on Wednesday. Reuters

“The president has been crystal clear and incredibly consistent. Military action is possible. If that’s what’s required, that’s what the United States will do,” Pompeo said on Fox Business Network.

Pompeo said the US would prefer a peaceful transition of power, with President Nicolas Maduro leaving and new elections held to choose new leaders.

“But the president has made clear in the event that there comes a moment — and we will all have to make decisions about when that moment is and the president will ultimately have to make that decision — he’s prepared to do that if that’s what’s required.” In a separate interview with CNN, National Security Advisor John Bolton said Pompeo would be speaking later today with Russian Foreign Minister Sergei Lavrov to discuss the situation.

Bolton and Pompeo have accused Russia and Cuba of standing in the way of a change in the regime in Caracas. Pompeo said on Tuesday that Maduro was set to leave the country for Cuba but apparently was talked out of it by the Russians.

“The Russians like nothing better than putting a thumb in our eye,” Bolton said. “They’re using the Cubans as surrogates. They’d love to get effective control of a country in this hemisphere.” “It’s not ideological, it’s just good old fashioned power politics. That’s why we have the Monroe doctrine which we’re dusting off in this administration, why the president indicated last night that the Cubans better think long and hard about what their role is,” he added.

The Monroe doctrine is a 19th century US policy opposing interference in the western hemisphere by European powers, which later was invoked to justify US intervention in Latin America.

Venezuelans were expected to take to the streets on Wednesday for what opposition leader Juan Guaido pledged would be the “largest march” in the country’s history, a day after he called for the military to oust President Nicolas Maduro.

In his boldest effort yet to gain the support of the armed forces, Guaido appeared early Tuesday outside a Caracas air force base with dozens of National Guard members. That triggered a day of violent protests, leaving more than 100 injured, but without any concrete signs of defection from the armed forces leadership.

“Today we continue,” Guaido said in a post on Twitter early on Wednesday. “We will keep going with more strength than ever, Venezuela.” Whether the protest turnout meets those lofty hopes will provide a key test for Guaido, amid frustration among some supporters that Maduro remained in office more than three months after Guaido — who leads the opposition-controlled National Assembly — invoked the constitution to assume an interim presidency, arguing Maduro’s May 2018 reelection was illegitimate.

While Guaido earned the backing of the United States and most Western countries, the armed forces have stood by Maduro, who retains the support of allies like Russia, China and Cuba.

That has frustrated Guaido’s bid to assume the day-to-day functions of government on an interim basis — which he says would be a prelude to calling new elections. Maduro, a socialist, calls Guaido a puppet of the United States who is seeking to orchestrate a coup against him.

Russia on Wednesday denied a claim by US Secretary of State Mike Pompeo a day earlier that Maduro was prepared to leave the country but nixed his plan after Russia intervened. A spokeswoman for Russia’s foreign ministry told reporters the comments were part of an “information war.” In a television interview Wednesday, Pompeo said US military action was “possible” in Venezuela but that the Trump administration would prefer a peaceful transfer of power.

Venezuelan living standards have declined even further in the first several months of the year, with blackouts and water shortages adding to hyperinflation and chronic shortages of food and medicine that have prompted millions to emigrate.