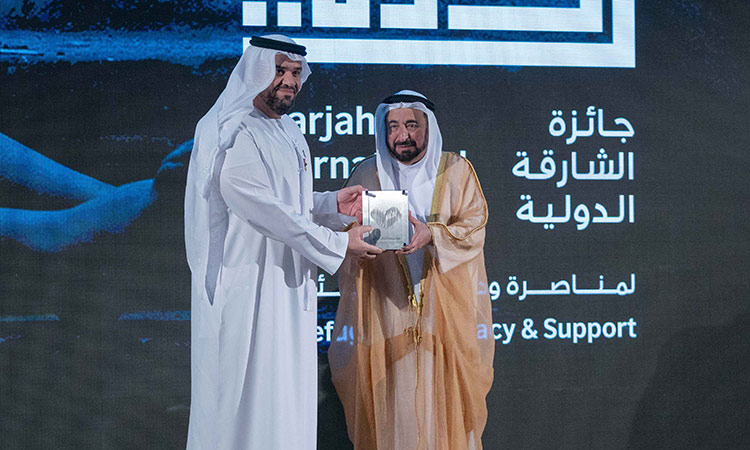 Al Jasmi was accorded the trophy at the awarding ceremony to recognise the winner of the third annual Sharjah International Award for Refugee Advocacy and Support (SIARA), organised by TBHF in collaboration with United Nations High Commissioner for Refugees (UNHCR), at the at the Sharjah Police Science Academy on Wednesday.

Al Jasmi’s selection as the holder of this prestigious title was made by Her Highness Sheikha Jawaher Bint Mohammed Al Qasimi, Wife of His Highness the Ruler of Sharjah and Chairperson of TBHF, in recognition of his sustained efforts in using his career and popularity to support charitable and humanitarian works.

The conferring of the title on Al Jasmi is a part of TBHF’s efforts to foster the culture of charity among artists. It is also in line with TBHF’s strategy to intensify a culture of humanitarianism in the UAE community by highlighting the advocacy and accomplishments of local role models.

Since the beginning of his career, Al Jasmi has been a keen advocate of philanthropic and humanitarian work, believing that artists should have a commitment to community service and human causes.

The Emirati superstar, who was named Goodwill Ambassador, and later ‘Ambassador at Large’, by the United Nations for his humanitarian work globally, has been a keen supporter of TBHF since its inception as “Salam Ya Seghar” campaign in 2013.

He has also participated in several initiatives by the foundation.

Al Jasmi has contributed to communicating messages of awareness through his songs.

His philanthropic efforts included visiting institutions and centres that care for people in need in the UAE as well as other countries.

Commenting on the honour, Al Jasmi said he was extremely proud to have received the coveted title from Sheikh Sultan, and for being selected by Sheikha Jawaher for the honour, noting that the culture of philanthropy and giving was deeply rooted in Emirati society.

“The immense efforts and initiatives championed by TBHF are part of the enormous and important humanitarian work being done at the regional and global levels. These milestone efforts exemplify Sheikh Sultan’s vision and Sheikha Jawahar’s keen interest in supporting the unfortunate no matter where,” Al Jasmi said.

He added: “Sharjah is not only a beacon of science and knowledge but also a city that keeps giving.”