Cubans protest against US sanctions - GulfToday 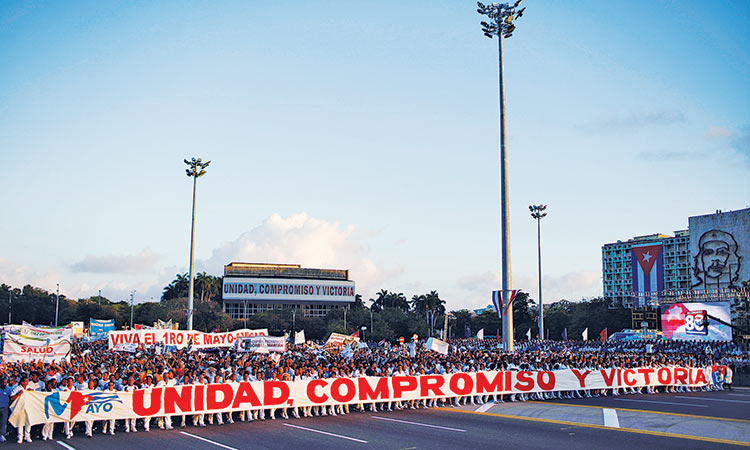 People carry a banner reading ‘Union, Commitment and Victory’ during a May Day rally in Havana, Cuba, on Wednesday. Reuters

“We will give a strong, firm and revolutionary response to the statements loaded with threats, provocations, lies and slander of the Yankee empire,” tweeted Cuban President Miguel Diaz-Canel as dawn broke over Havana.

The annual marches across the Communist-run country, marking International Workers Day, provided the first opportunity to publicly protest a US offensive against socialism in the region declared by US national security advisor John Bolton late last year. That was followed by a series of new sanctions against Venezuela, Cuba and Nicaragua and the appearance of shortages of basic goods on the island.

“We denounce the maneuvers aimed at destabilising the left and progressive governments, particularly in Venezuela and Nicaragua,” according to a statement read at the start of the march in Havana’s historic Revolution Plaza.

The Cuban government has proved unable to counter new US sanctions and attacks on Nicaragua and especially Venezuela, Western diplomats say.

“They are doing what they can through diplomatic channels to support dialogue in Venezuela and certainly still have influence with African and other developing countries,” a European ambassador said.

“And they are certainly using the situation to strengthen political support at home and drum up support abroad where they can. There is not much more they can do,” he said.

Those remarks came after Bolton said there were more than 20,000 Cuban military personnel in Venezuela and that potential high-level defectors feared Cuba’s wrath.

Cuba has repeatedly denied it has troops on the ground. “Bolton is a pathological liar who misinforms President Trump. There are no Cuban troops in Venezuela or Cubans participating in military or security operations,” Cuban Foreign Minister Bruno Rodriguez tweeted on Tuesday.

While the marches throughout Cuba were organised by the government, there is little doubt Cubans are in shock and angry over the rapid deterioration of relations with the US in recent months. They also see Venezuela as an ally and source of sustenance.