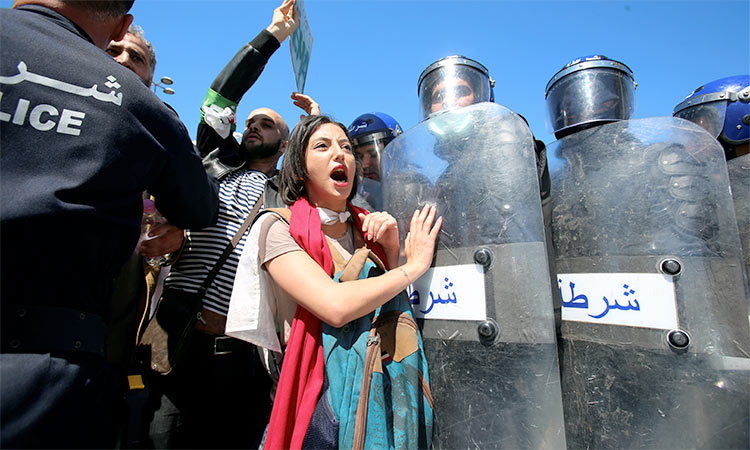 Police prevent demonstrators from marching during a May Day protest on Labour Day in Algiers on Wednesday. Reuters

“I remain entirely convinced that adopting constructive dialogue with the institutions of the state, is the only way to exit from the crisis,” General Ahmed Gaid Salah said in a statement published by the defence ministry.

This is “the wisest way to present constructive proposals, bring points of view closer and reach a consensus around the available solutions,” he added.

Salah was for years an ardent supporter of president Abdelaziz Bouteflika, until demanding on April 2 that impeachment proceedings be launched against the ailing leader − who stepped down the same day.

An interim president has been put in place and elections set for July 4, but protests which pushed Bouteflika from power have not abated.

On Wednesday hundreds of people rallied outside the General Workers’ Union in the capital Algiers, marking May Day, where they clutched Algerians flags and shouted slogans against the “system”. Police prevented them from joining other protesters gathered outside the city’s iconic post office, the focal point of demonstrations which began in February and have regularly drawn vast crowds.

In a speech, the army chief said the upcoming polls − which fall within the timeframe allowed by the constitution − amount to “the ideal solution to end the crisis.”

A number of figures from the ruling elite including the finance minister, former prime minister and several oligarchs have come under investigation in recent weeks.

“The judiciary has been freed from all pressures,” Salah said in a speech at a base in the eastern city of Constantine.

“The country will be cleansed of corruption and corrupt people.”

Salah spoke hours after former Prime Minister Ahmed Ouyahia, who was sacked as part of a Cabinet reshuffle two days before Bouteflika resigned, appeared in court as part of a corruption investigation.

There was no immediate comment from Ouyahia or his lawyers. It is up to the court to decide whether there is enough evidence for him to face a formal charge. Ouyahia later left the court after being questioned by a prosecutor, state TV said.

“Put Ouyahia in prison,” read a banner held up as dozens of protesters gathered near the court in the capital, Algiers.

On Monday, Finance Minister Mohamed Loukal — a former central bank governor who only got the job from Bouteflika last month — appeared in court in relation to an investigation into suspected misuse of public funds, state TV reported.

At least five tycoons, some close to Bouteflika, have been detained and accused of involvement in corruption scandals.

Bouteflika’s exit has not quieted protesters, who are now demanding the dismantling of an entire ruling elite entrenched for decades, a shift towards more democracy and a crackdown on systemic corruption and cronyism.

The 50-year-old Djemai, whose business interests have included smartphones, is a relatively youthful figure atop the FLN, most of whose senior officials are in their 70s and have dominated Algeria since independence from France in 1962.

Djemai replaces Moad Bouchareb. The FLN, which has ruled since independence in 1962, will lead Algeria to a position of security, Djemai was cited as saying by the private Ennahar TV.

Until presidential elections on July 4, Algeria — a major oil and gas producer — will be run by Abdelkader Bensalah, head of the upper house of parliament, as caretaker president, although he has also faced demands to resign.

Many Algerians hardly took notice of the FLN leadership change as they pressed for bigger changes.