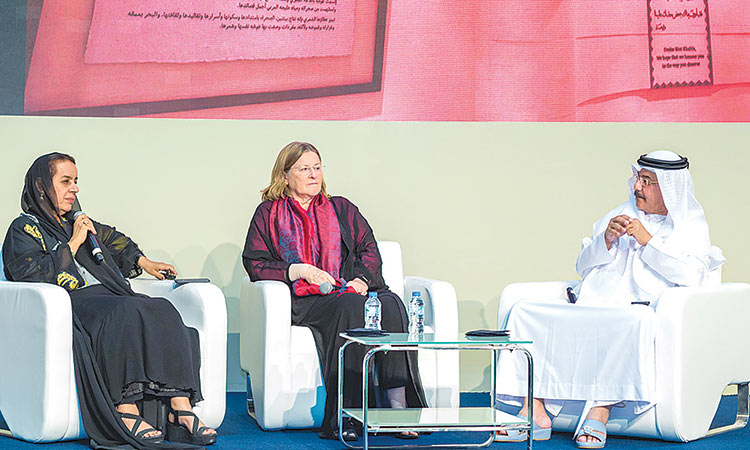 The Abu Dhabi International Book Fair (ADIBF) 2019 has hosted a special talk to honour the Fair’s Focused Personality, the legendary Emirati poet Ousha Bint Khalifa Al Suwaidi. The event was attended by Dr Rafia Ghubash, founder of the Women’s Museum in Dubai, who has collected and documented all of Al Suwaidi’s poems, and journalist and author Naser Al Dhaheri.

Dr Ghubash told the audience that she and Ousha’s family were pleased with this initiative to celebrate the memory of the poet, who had enriched Emirati culture, both in print and audio forms.

Dr Ghubash said: “Although the Diwan [collection of works] is famous, I feel we have not yet finished our mission. At the Women’s Museum, we were lucky to have designed a hall dedicated to Ousha. I explained to the designer how I imagined Ousha leaving Al Ain and heading towards Dubai to meet HH Sheikh Mohammed Bin Rashid Al Maktoum [Vice President and Prime Minister of the UAE and Ruler  of Dubai] while she was writing. And indeed, the designer transferred my ideas into reality. Today, this hall is a sanctuary, where you sense the greatness of this figure.”

She added: “We are proud that HH Sheikh Mohammed Bin Rashid has already visited it twice. There is an enthusiasm among Arab and foreign readers for her poetry, and foreigners are determined to translate it. Her biography includes some of her poems, translated into English.”

Dr Ghubash was recently contacted by a young man who requested the copyrights for the Diwan to be published in Braille so that visually impaired individuals could explore it.

“After all, everyone shares a desire to honour this great woman. We were also considering turning some of her poems into songs, to be performed by Lebanese singer Ghada Shbeir to reach the Arab audiences.”

Dr Ghubash pointed out that Ousha and her father had a perfect relationship based on love, admiration and mutual respect. “She used to read his letters and did herself some writings as she was using old charcoal to write on the walls, expressing the alphabet she was learning.”

She added: “As we were preparing the Diwan, we put a lot of efforts to document each poem. The first was a poem in Fusha (standard) Arabic, honouring the Prophet Muhammad (PBUH). We found also another Fusha poem, which responds to an academic who claimed she hadn’t written anything in Fusha. We collected 150 poems, including 18 poems that haven’t been published before. One of which was a long four-page poem, which I felt when I read as if I was watching a documentary, something that left an image in my head.

“Ousha’s poetry has enriched the Emirati cultural sphere. She captured the depth, the beauty and the intimacy of the human emotions against a background of her inner self and the world around her. If we delve into her legacy, we will find that she touched everything. She was granted a natural gift to master the language, the music of the letters and the topics she expressed.”

Dr Ghubash explained: “During the only call that I had with Ousha in 2006 from Bahrain, she told me about a dream she had when she was a child: when the moon landed on her face, then when she ate the moon, its light went from her nose, mouth and inside. She told her father about the dream, who went in turn and asked an Imam from Liwa, whose answer was ‘God will gift Ousha with knowledge, so she will shine like the moon’.”

She concluded: “My story with Ousha is not over yet. I love to talk about her and to hear her poems every day. I wish to be able to continue my work on her poetry. It is indeed a gem for the UAE, and we need to invest in it. I am excited to translate my project as I finally met translators and poets from Saudi. We are discussing this seriously and we have prepared the copyrights processes. I hope to complete this mission before the next year’s edition of Abu Dhabi International Book Fair.”

Naser Al Dhaheri pointed out that the Diwan represents a great encyclopaedia. Addressing Dr Ghubash, he said: “Perhaps, a few years from now, you will edit it. As you keep working hard, I’m sure you will find more publications here and there; something you can add.”

He added: “Ousha was a genius in her ability to crystallise her gift as she studied and learned. Her journey has enriched her experience and added extraordinary dimensions to it. She was present at Sheikhas’ Majlis and we all know the rich knowledge one can gain in such meetings. Ousha was great – she was able to meditate and that’s a gift. In her Diwan, one can sense this meditation manifested.”

Agreeing with Al Dhaheri, Dr Ghubash added: “Ousha was known for retreating for long periods,” pointing out that Ousha had a rich library, full of old and new books. She said: “She once mentioned to me that she was reading every night a story from One Thousand and One Nights. She was from the 1920s and 1930s generation who were heavy readers and able to remember what they read, especially when it comes to Fusha and Nabati poetry.”

Dr Ghubash concluded: “Although Ousha was absent from the cultural scene since 1994, she had written prodigiously during the previous years.”