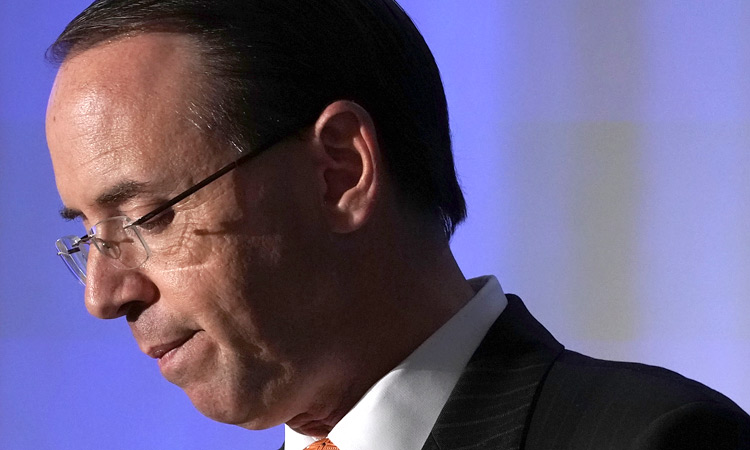 US Deputy Attorney General Rod Rosenstein pauses as he speaks during an event in Washington. File/AFP

US Deputy Attorney General Rod Rosenstein, who chose Special Counsel Robert Mueller to lead the Russia interference probe and protected him from political intrusion, announced Monday he was stepping down.

The veteran Republican prosecutor, 54, stunned the country on May 17, 2017 when he named an independent lawyer to take on the Russia probe after Trump fired FBI director James Comey.

Then-attorney general Jeff Sessions had already recused himself from overseeing the investigation, leaving Rosenstein in charge.

That made Rosenstein effectively the one buffer between Mueller and the White House — a position that became even more crucial when the investigation began examining whether Trump himself had obstructed justice by firing Comey and then trying to have Mueller ousted. 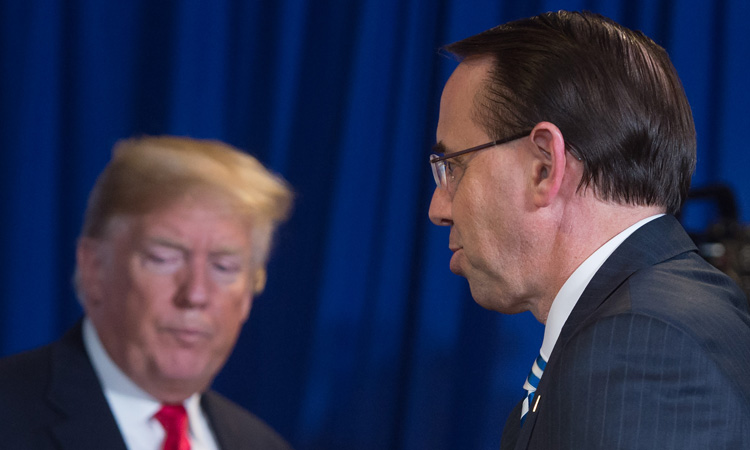 In his final report released on April 18, Mueller concluded that no one on Trump's campaign conspired to collude with Russians.

But he reached no conclusion on obstruction, detailing the evidence he had accumulated and leaving it to Congress to act.

Ahead of the release of the report, Rosenstein stood silently next to Attorney General Bill Barr as Barr asserted that there was not enough evidence in Mueller's report to charge Trump with obstruction -- a claim that many lawyers said was false.

Rosenstein had made clear last year that he would step down after Mueller's report was released.

His tenure was rocky and he drew strong criticism for doing Trump's bidding on numerous other questionable policies, like the president's attempt to ban Muslim immigrants and his legally dubious policies to block migrants at the southern border.

Just days after his appointment in April 2017, Trump tested Rosenstein's loyalty by demanding he author a justification for firing Comey.

Trump made clear that a key reason he wanted the FBI chief out was to stymie the Russia investigation, which threatened members of the president's team.

Rosenstein obliged, and later, according to reports, told colleagues he was flabbergasted at being used by Trump against Comey.

His move eight days later stunned the White House, naming Mueller -- a former FBI director himself -- to take over the probe. 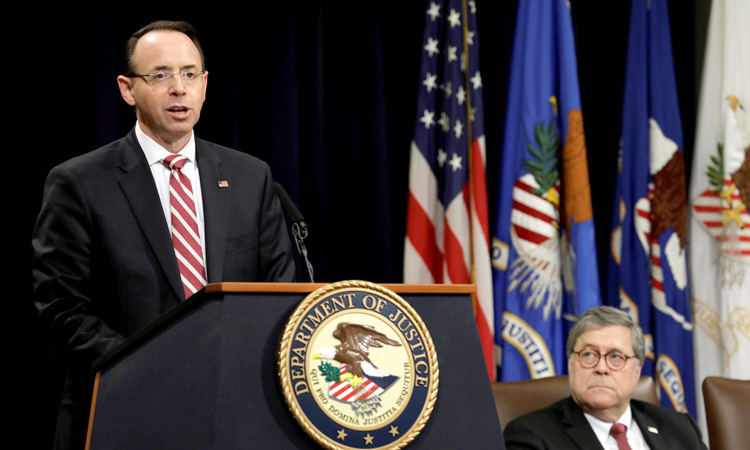 As Mueller issued indictment after indictment of his former campaign aides, Trump was furious. He repeatedly attacked Sessions, Rosenstein and Mueller as running an "illegal witch hunt," demanding it be shut down.

He came under direct pressure last year when media reported that, in the wake of Comey's firing and other controversial actions by Trump, Rosenstein privately discussed with top Justice and FBI officials recording the president in his offices for evidence that he was unfit, so that he could be constitutionally removed.

While the Justice Department sought to characterize it has having been said jokingly, Rosenstein was unable to shed suspicions that he was discussing an illegal action against the president.

Rosenstein reportedly drafted his resignation, but stayed on after a meeting with Trump, saying he would see the Mueller investigation through.

Trump has been seeking to block access to his tax returns and other records in cases brought by New York prosecutors and Democratic-controlled committees in the House of Representatives.