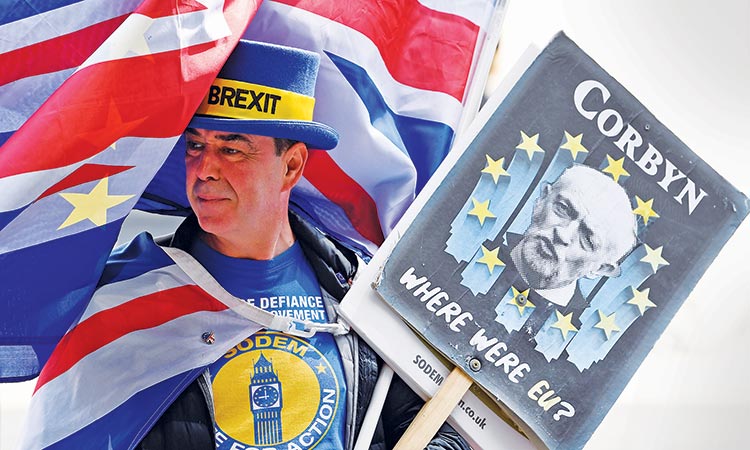 An anti-Brexit protester demonstrates outside the Labour Party’s headquarters in London on Tuesday. Reuters

Ministers held their latest talks on Monday with senior members of the main opposition Labour party.

They are seeking a way through the political deadlock over how to leave the European Union, which has forced Britain to twice delay its intended exit.

“There were serious and constructive discussions last night, and we will now look to hold further talks in the coming days,” May’s spokesman said.

“Further talks will now be scheduled in order to bring the process toward a conclusion,” he added.

No announcements are expected this week due to local elections being held on Thursday, but the spokesman said progress must be made “as soon as possible.”

Reports suggest the government is aiming to decide by the middle of next week if the talks will ever succeed, or if they should be abandoned. May has said that if no deal is possible with Labour, she would ask MPs to vote on a series of possible options.

The House of Commons has three times rejected the divorce deal she struck with the EU in November, intended to ease Britain’s split from its largest trading partner after four decades of membership.

But MPs have also been unable to agree on any alternative.

“There’s a full understanding throughout cabinet and the government of the need to make progress,” May’s spokesman said, after a meeting of the cabinet.

The prime minister agreed with the EU earlier this month to delay Brexit until October 31 to find a way through the political impasse. It was originally scheduled for March 29.

However, May is still hopeful of getting her deal passed in the coming weeks to allow Britain to avoid holding European Parliament elections on May 23.

If that is not possible, she hopes to avoid any lawmakers elected in that poll having to take their seats.

Meanwhile, a source said on Tuesday that Labour Party will back the option of a public vote, or second referendum, if it cannot win support for its own Brexit deal, secure changes to the government’s Brexit agreement or a national election,

After a meeting of the party’s National Executive Committee, the governing body for Labour, the party source said the agreed position to take into elections to the European Parliament in May was “fully in line with Labour’s existing policy.”

That policy is “to support Labour’s alternative plan, and if we can’t get the necessary changes to the government’s deal, or a general election, to back the option of a public vote.”

“The ongoing uncertainty is bad for business,” Hammond told a fintech conference.

Britain’s car output under a no-deal Brexit could collapse to a level last seen in “the dark days of the 1980s,” the nation’s industry body forecast on Tuesday.

The warning came as Jaguar Land Rover said its new Land Rover Defender model would be assembled in Slovakia − but did not blame the move on the UK’s departure from the European Union.

The Society of Motor Manufacturers and Traders (SMMT) said the worst case scenario would be for Britain to depart the EU without a deal struck with Brussels, forcing it to endure tariffs set by World Trade Organization rules.

These customs duties average 1.5 per cent, which is still quite low. But they can be higher in some sectors such as the crucial automotive sector where they are 10 per cent.

“Should Britain crash out of the EU and fall back on WTO rules for a sustained period, (UK car) output is forecast to fall around 30 per cent on recent levels to just 1.07 million units by 2021, a level consistent with the dark days of the mid-1980s,” the SMMT said in a release.

Britain is due to leave the European Union on October 31 after two delays this year triggered by MPs rejecting the divorce deal Theresa May has struck with the bloc. 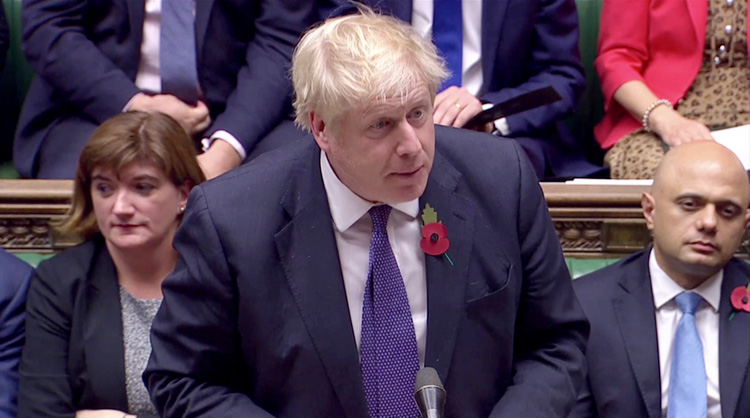