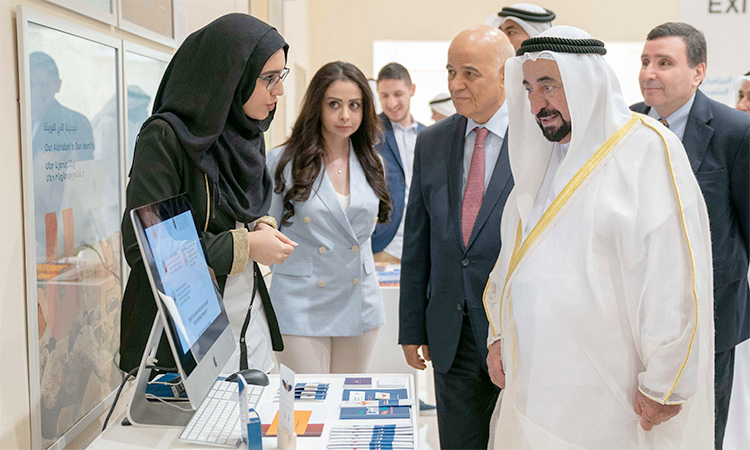 The Ruler of Sharjah tours all four departments of the exhibition.

Dr Sheikh Sultan also opened a graduation exhibition for students of the college “EXIT14”, for the year 2018-2019, which was held in the new building of the college, and included 104 graduation projects.

The Ruler of Sharjah toured all four departments of the exhibition and reviewed the works created by graduate students. He also inspected the various facilities of the new college building as part of its expansion. The building includes halls and facilities dedicated to further development and modernisation in accordance with the highest international standards in the field of technology of faculties of fine arts and its various accessories.

Dr Sheikh Sultan started his tour by inspecting the work of the students of interior architecture and design. The students presented a number of innovative works of artistic and architectural designs that included advanced visions for many facilities inside and outside the country.

He then went on to observe the works of the Fine Arts Programme and viewed a number of students ‘works, which included a variety of paintings dealing with various artistic themes, characterised by creative and modern ideas, using various means to create overlapping artworks highlighting the aesthetics of the work content and the students’ ideas.

During his tour, the Ruler of Sharjah visited the exhibition of Fashion and Textile Design, in which the students presented many innovative models of designs of different types of textiles and their various innovations for seasons, ages and different categories of society.

He concluded his tour by visiting the Graphic Design and Multimedia section, where the participants presented many design ideas and media software.

The Ruler of Sharjah received a commemorative gift from the students participating in the exhibition, which is a masterpiece of the main architectural buildings in Sharjah, as well as the beauty of the new expansion design of the building of the Faculty of Fine Arts and Design at the University of Sharjah.

The new building of the Faculty of Fine Arts and Design at the University of Sharjah has a number of basic facilities and is designed on an area of 3,696 square metres. The building’s facilities include the new library hall which will add an area equal to 50 percent of the library’s existing library space to be a great addition to the library’s specialised art library.

The new expansion building includes five new studios for students in the graphics and multimedia design programme, a large lecture hall and a fully equipped theatre designed to accommodate various activities at the college.

The University of Sharjah was established with the aim and vision to contribute to the qualities shared by renowned universities around the world. The education and research programs they offer tend to be comprehensive and multi-disciplinary.

The University of Sharjah is a comprehensive academic institution with a distinctive learning style and a global vision. It is a pioneer in academia, scientific research and the arts in the UAE and the GCC region. All programmes are accredited by the UAE Ministry of Higher Education and Scientific Research. Some programs such as Engineering, Communication, Science and Business have attained international accreditation.

The University of Sharjah fosters a culture of critical inquiry in a diverse learning environment which leads to the discovery, creation, and dissemination of knowledge. The University is committed to providing its students with an education and life-long learning experience of the highest quality through the provision of a comprehensive platform of excellent academic and professional programmes, promoting creativity, innovation in research and scholarship, and enhancing the personal, social, academic, and career development of all students. The university serves the socio-cultural and economic needs of the community and the society in the UAE and beyond.