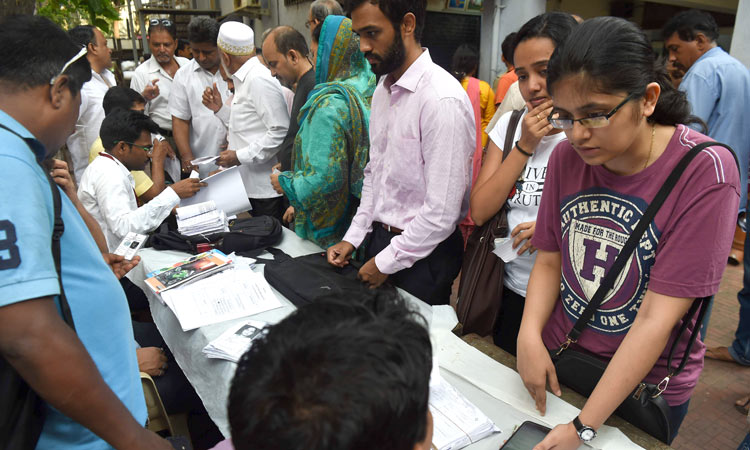 An Indian voter (right) interacts with an election official at a polling booth in Mumbai. Indranil Mukherjee/AFP

Voting began on Monday across 72 Lok Sabha constituencies spread over nine states, mostly in the Hindi heartland, as the fourth phase of the mega seven-phase electoral exercise kicked off.

A total electorate of 12.79 crore is eligible to exercise their franchise in this phase covering 17 seats in Maharashtra, including Mumbai's six seats, six in Odisha, 13 in Uttar Pradesh, five in Bihar, and eight in West Bengal, while Rajasthan, Jharkhand and Madhya Pradesh have their first phase of polls with voting in 13, 3 and 6 constituencies, respectively.

Voting will also be held in the second phase of the staggered polling in Jammu and Kashmir's Anantnag constituency. 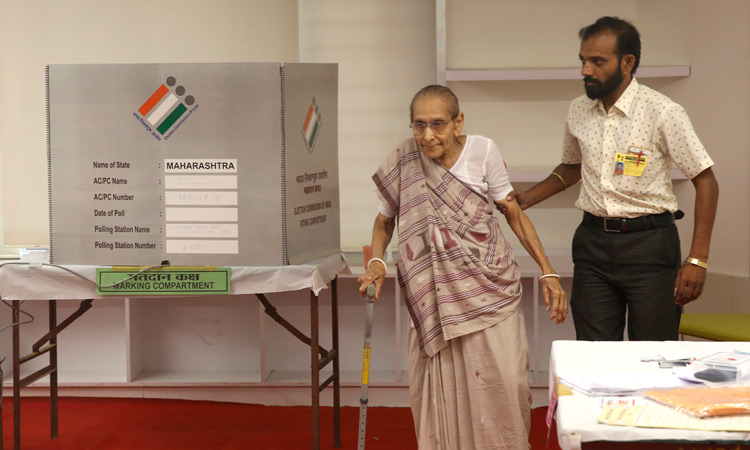 A polling staff assists an elderly citizen as she prepares to leave after voting at a polling centre in Mumbai.

The phase will also see polling in the final phase of the Odisha Assembly elections as well the bypoll to Madhya Pradesh's Chhindwara Assembly seat from where Chief Minister Kamal Nath is contesting in order to become a legislator.

“Long queues outside polling stations would indicate whether Modi's national security pitch was working. Whenever there is a BJP kind of a wave, you see a higher voter turnout.

In Maharashtra, all the remaining nine seats were won by the Shiv Sena while in Bihar, the remaining two seats were bagged by BJP's ally Lok Janshakti Party. The Congress got only two — one in Madhya Pradesh and one in West Bengal.

Among other parties, the Biju Janata Dal won all six in Odisha, the Trinamool Congress six in West Bengal and the Samajwadi Party one in Uttar Pradesh.

With the fourth phase, voting will be completed in all seats of Maharashtra and Odisha.

The seven-phase Lok Sabha elections started on April 11 and would conclude on May 19. Counting of votes will take place on May 23.

Some of India's richest families, Bollywood stars and others voted early on Monday in Mumbai and elsewhere in the country as the fourth phase of a massive, staggered general election got underway.

A policeman directs Congress (INC) candidate Priya Dutt (C) along with her husband Owen Roncon to their booth in Mumbai. Indranil Mukherjee/AFP

An elderly Indian couple hold each other's hand as they leave a polling center after casting their votes in Mumbai.

Indian residents line up to cast their vote at a polling station during the fourth phase of general election in Mumbai. Punit Paranjpe/AFP

Indian residents check their names in voters list before casting their votes at a polling station in Mumbai. Punit Paranjpe/AFP

People wait in queues to cast their vote at a polling station at Sirohi district in the desert Indian state of Rajasthan, India, on Monday. Amit Dave/Reuters

Many of the constituencies are in Uttar Pradesh state in the north and western India's Maharashtra, where the financial capital Mumbai is located. Uttar Pradesh elects the most MPs, with Maharashtra next, and both states are ruled by Modi's Hindu nationalist Bharatiya Janata Party (BJP).

However, political analysts say the BJP may struggle to repeat its strong showing this time due mainly to a jobs shortage and weak farm prices, issues upon which the main opposition Congress party has seized.

"Jobs should be the priority for the new government," said Aaditya Nair, a hotel management student, as he stood in line outside a polling station in Mumbai.

India's financial markets were closed on Monday for the election.

Mumbai, which has six seats, is India's wealthiest city but ageing and insufficient infrastructure is a major concern. Six people were killed last month when part of a pedestrian bridge collapsed, bringing back memories of a 2017 rush-hour stampede that killed at least 22 people on a narrow pedestrian bridge.

"Jobs should be the priority for the new government.

Ambani, who heads Reliance Industries, and Kotak, managing director of Kotak Mahindra Bank, created a stir this month by publicly endorsing a Congress candidate from their upscale South Mumbai constituency.

The election, the world's biggest democratic exercise with about 900 million voters, started on April 11 with Modi in the lead amid heightened tension with long-time enemy Pakistan. 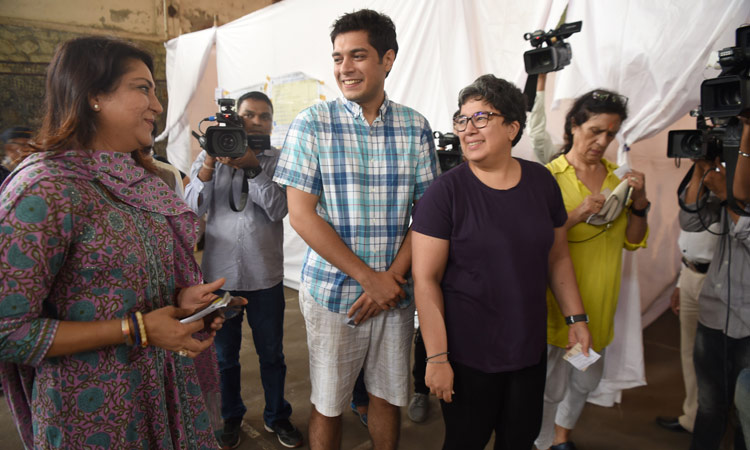 The last phase of voting is on May 19, with results released four days later.

There are a total of 545 seats in parliament's lower house.

Modi sent warplanes into Pakistan in late February in response to a suicide attack by an Islamist militant group based there that killed 40 Indian police in the disputed Kashmir region.

Modi has sought votes on his tough response towards militancy and in recent days has evoked the deadly Easter Sunday bombings in nearby Sri Lanka.

Maidul Islam, a professor of political science at Kolkata's Centre for Studies in Social Sciences, said long queues outside polling stations would indicate whether Modi's national security pitch was working.

"Whenever there is a BJP kind of a wave, you see a higher voter turnout," he said.