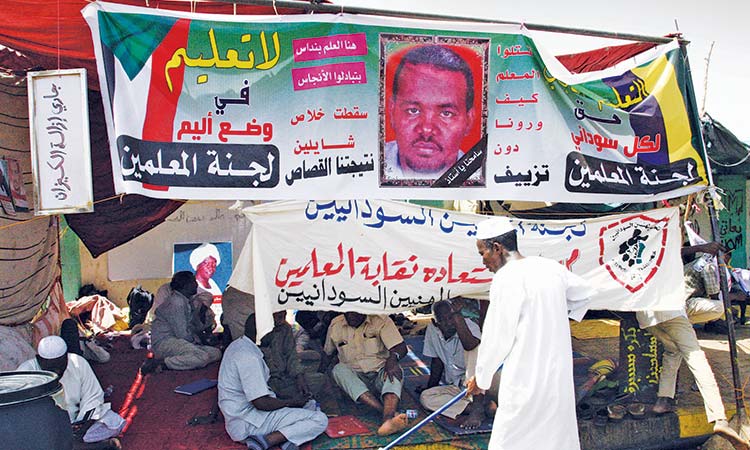 A banner, bearing the portrait of Ahmed El Kheir, hangs on a tent outside the army headquarters in Khartoum on Monday. Agence France-Presse

The negotiations were being held in the presidential palace in Khartoum and a joint statement was expected later on Monday, the correspondent reported from the palace.

The latest round of talks comes after the two sides on Saturday agreed to form a joint civilian-military council to rule the northeast African country.

Under the deal, the joint council would replace the existing 10-member military council that took power after the army ousted veteran leader Omar al-Bashir on April 11 amid massive protests.

The decision to have a joint council paves the way for a civilian administration as demanded by protesters, who continue to rally outside the army headquarters in central Khartoum.

The joint civilian-military council would be the overall ruling body, the protest leaders say, while a new transitional civilian government was expected to be formed to run the country’s day-to-day affairs, a key demand of protesters.

That civilian government would work towards having the first post-Bashir elections.

The military council has so far insisted it has assumed power for a two-year transitional period.

Thousands of protesters first massed outside the army headquarters on April 6, demanding that the armed forces back them in ousting Bashir.

Since then the 10-member council of generals has continued to resist calls to step down.

Western governments have expressed support for protesters’ demands, but Sudan’s key Gulf Arab lenders have backed the military council, while African states have called for more time for the army.

Meanwhile, hardliners in Sudan who were allied with Bashir say they have cancelled a planned rally for fear of violence from the protesters who drove him from power earlier this month.

Ultraconservative preacher Abdel-Hay Youssef said in video posted on Facebook that the decision to cancel Monday’s rally came after a meeting with General Mohamed Hamdan Dagalo, known by the nickname Hemedti, who serves as deputy head of the ruling military council.

Youssef says they received assurances from Dagalo and others that “Islamic laws will not be abolished.”

Sudan’s hardliners played a key role in the 1989 coup that brought Bashir to power. An hardliner party says protesters attacked one of its meetings over the weekend, wounding dozens in clashes.

Meanwhile, in a separate development Ahmed al-Kheir’s friends and family are delighted with the Sudanese president’s ouster but say justice will only be served once ex-regime officials are made to pay for the village teacher’s death in custody.

“We, the family of Ahmed Al Kheir, are very happy with the toppling of Bashir and his regime,” Kheir’s brother Saad told reporters at their family home in Khashm El Girba, a small village in the eastern province of Kassala along the border with Eritrea.

“We believe that Bashir’s entire regime was responsible for Ahmed’s killing.”

Kheir, 36, was arrested in late January in his village by agents of the powerful National Intelligence and Security Service (NISS) on allegations he was one of the organisers of anti-Bashir protests in the area.

Days later, Kheir’s family was told to collect his body from a local mortuary.

A top official in Khartoum confirmed in February that Kheir had died from wounds suffered in detention.

Kheir “had wounds on the back, legs and other parts of his body that led to his death”, the official said.

Security agents of the NISS had launched a deadly crackdown on protests that erupted in December in response to the Bashir government’s decision to triple the price of bread.

The protests swiftly mushroomed into nationwide demonstrations against Bashir’s iron-fisted rule, with protesters urging him to step down.

Dozens of people died in a crackdown by security forces, while hundreds were wounded and thousands jailed.

On April 11, the army finally ousted Bashir after months-long protests that were initially led by a group of teachers, doctors and engineers.