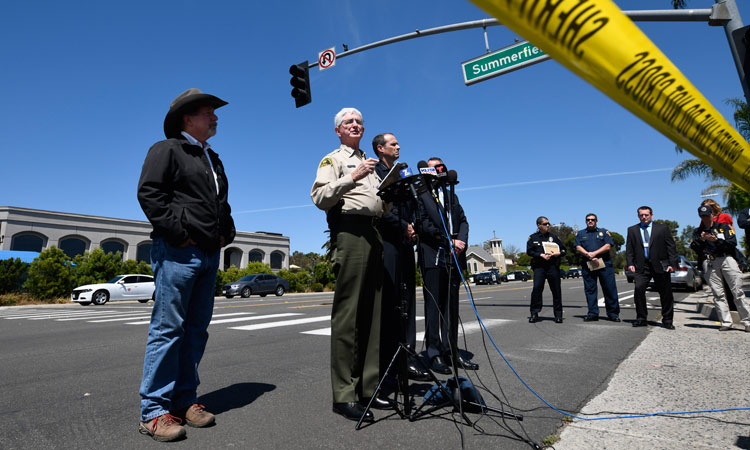 A teenage gunman who wrote a hate-filled manifesto opened fire at a synagogue in California on Saturday, killing one person and injuring three others including the rabbi as worshippers marked the final day of Passover, authorities said.

San Diego County Sheriff Bill Gore said those wounded included the rabbi — who had injuries to both index fingers — as well as a female minor and 34-year-old man who were injured by shrapnel.

A 60-year-old woman died from her wounds.

Two Israelis — an eight-year-old girl and her 31-year-old uncle -- were wounded in the attack, Israeli foreign ministry spokesman Emmanuel Nahshon said, adding their condition was "good".

Gore identified the suspect, who was arrested after fleeing the scene, as 19-year-old John Earnest and said he had no prior arrest record.

He said Earnest burst into the Chabad of Poway synagogue -- where there were around 100 people -- shortly after 11:20 am local time and opened fire with an assault weapon that appears to have malfunctioned, preventing him from inflicting more harm. 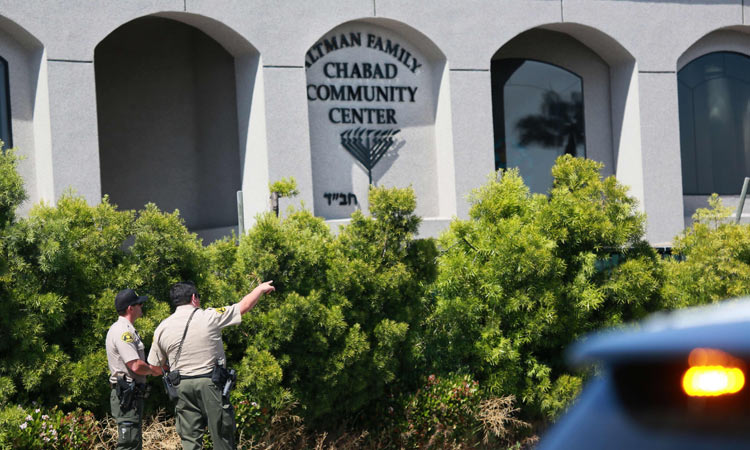 San Diego Sheriff deputies look over the Chabad of Poway Synagogue after a shooting on Saturday. Sandy Huffaker/AFP

Gore said an off-duty border patrol agent who was at the synagogue at the time of the shooting opened fire on the gunman as he was fleeing, striking his car but missing the suspect.

"He clearly saw the suspect's vehicle, the suspect jumped out with his hands up and was immediately taken into custody by the San Diego police department," Nisleit said.

Gore said authorities were examining Earnest's social media activity and establishing the authenticity of an anti-Semitic open letter he apparently published on a far-right message board hours before the attack.

"We have copies of his social media posts and his open letter and we'll be reviewing those to determine the legitimacy of it and how it plays into the investigation," he said.

Tonight, America's heart is with the victims of the horrific synagogue shooting in California.

The manifesto, seen by AFP, is similar to one posted on the same message board by Brenton Tarrant, a white supremacist who was behind the March 15 mosque attacks in Christchurch, New Zealand, that left 50 people dead.

The hate-filled letter lauds Tarrant's actions and that of the Pittsburgh shooter and claims responsibility for a fire at a mosque in California a week after the Christchurch shootings.

Following the attack, a vigil was set to take place Saturday evening at the Rancho Bernardo Community Presbyterian Church in San Diego.

Meanwhile, Los Angeles officials said that they were boosting patrols around synagogues and other places of worship in light of the attack.

Speaking at a rally in Wisconsin, President Donald Trump denounced the shooting as a "hate crime" and offered his support to the victims.

"Tonight, America's heart is with the victims of the horrific synagogue shooting in California," he said.

"Our entire nation mourns the loss of life, prays for the wounded and stands in solidarity with the Jewish community. We forcefully condemn the evil of anti-Semitism and hate which must be defeated."

Crime scene tape is placed in front of the Chabad of Poway Synagogue after a shooting on Saturday. Sandy Huffaker/AFP

Hand-written notes are displayed on a light post across the street in Poway, California. Sandy Huffaker/AFP

Mourners participate in a candle light vigil for the victims of the Chabad of Poway Synagogue shooting. Sandy Huffaker/AFP

This photo shows a makeshift memorial placed by a light pole in Poway. John Gastaldo

"While we continue to learn more about what transpired, we can't ignore the circumstances around this horrific incident," he said.

"No one should have to fear going to their place of worship, and no one should be targeted for practicing the tenets of their faith."

And German Foreign Minister Heiko Maas also expressed solidarity with the victims: "On the last day of the Passover celebration, another violent anti-Semitic act shocks us. The attack on the Chabad of Poway synagogue in San Diego impacts us all."

Minoo Anvari told the local CNN affiliate that her husband was inside the synagogue during the shooting.

"Just one message from all of us from our congregation that we are standing together," she said. "We are strong. You can't break us. We are all together."

The Simon Wiesenthal Center in Los Angeles said in a statement that the shooting was "a horrific reminder that the flames of hatred still burn strong among some."

"We have copies of his social media posts and his open letter and we'll be reviewing those to determine the legitimacy of it and how it plays into the investigation.

"An attack, on any house of worship, from churches in Sri Lanka and France to synagogues in Jerusalem or Pittsburgh to mosques in Christchurch, are an assault on human dignity and our rights as people of faith to pray to God," it added.

Saturday's shooting comes amid a rise in hate crimes in the United States, the majority targeting those of Jewish faith.

Last year, the Anti-Defamation League, which combats anti-Semitism and discrimination, reported a 57 percent leap in the number of anti-Semitic incidents in 2017, the sharpest yearly spike since the 1970s.