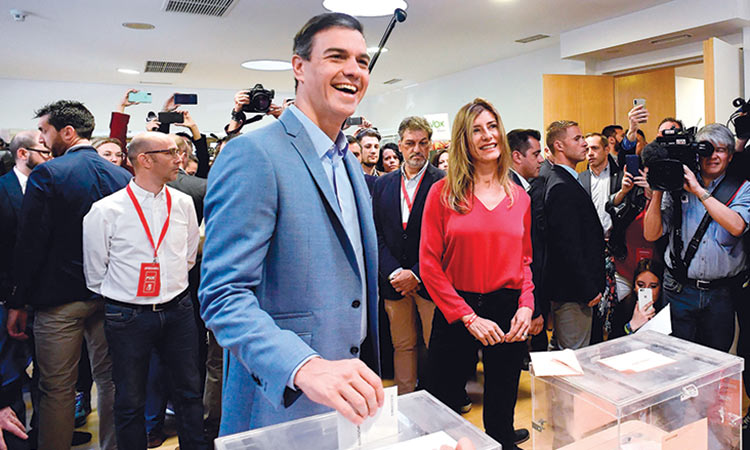 Spanish Prime Minister Pedro Sanchez casts his ballot next to his wife Begona Gomez at a polling station in Madrid on Sunday. Agence France-Presse

The Socialists of outgoing prime minister Pedro Sanchez are expected to finish first after a tense campaign dominated by national identity and emotive social issues such as gender equality.

But opinion polls suggest no single party will win a majority, making it likely that any coalition deal will take weeks or months to broker, and feeding into a broader mood of political uncertainty across Europe.

This is the third national election in four years, and both the first two eroded the decades-long dominance of the two biggest parties, the Socialists and the conservative Popular Party. Another repeat is a distinct possibility.

“Above all else today, Spaniards should vote in large numbers to send a ... clear message of what we (as a nation) want over the next four years,” Sanchez told reporters after voting near Madrid.

Leaders of all five main parties, ranging from the far-left Podemos through to the far-right Vox, expressed similar hopes as they cast their ballots early.

Data suggested voters were responding; at 60.75 per cent, the turnout by 6pm was the highest since 2008. Voting ends at 8pm in mainland Spain.

In Catalonia, where the pro-independence regional government launched an abortive bid to split from Spain in 2017, turnout stood at 64.2 per cent by 6pm, almost 18 percentage points up from the last national election.

And for the first time since Spain transitioned to democracy, more than 100,000 people with mental disabilities are being allowed to vote in the general election.

In the past two elections, both the early evening opinion polls and the initial preliminary data failed to give an accurate picture of the eventual outcome.

The mood among many voters was tinged with uncertainty — and in some cases an element of fear.

“I’m more of a (centre-right) Ciudadanos or PP voter, but I’m so scared of Vox that I voted ... for the Socialists,” said Julio Cesar Galdon, 27, a political science graduate from Madrid.

Many older voters well remember the military dictatorship of Francisco Franco, who died in 1975, and Spain had long been seen as resistant to the wave of populist nationalism spreading across much of Europe.

But some had no hesitation in switching to Vox, which has disavowed the dictator’s ideology, though its signature policies include repealing laws banning Franco-era fascist symbols.

“Last time I voted for the (conservative) PP. This time I voted Vox,” said 50-year-old Madrid bar worker Paula de la Calle. “They are bringing something new, the Spanish principles and values that the PP had started to lose.”

Opinion polls have failed to give a clear indication of how many seats the far-right newcomer will win, but it could easily get dozens, boosted by voter discontent with the established parties and by policies that include opposing a law on gender-based violence that it says discriminates against men.

It has also focused on widespread anger at Catalonia’s independence drive, the pivotal issue during campaigning and one that has opened a deepening rift between the three rightist and two leftist parties.

With neither of those two camps expected to win a clear parliamentary majority, pro-independence lawmakers from the wealthy northeastern region may well find themselves cast in the role of kingmakers.

If Sanchez needs support from the separatists in addition to Podemos in order to stay in office, talks will be long and their outcome unclear.

Opinion polls, which have been prohibited since Monday, have suggested it will be harder for a right wing split between the PP, Vox and Ciudadanos to clinch a majority. But the scenario is within polls’ margin of error and cannot be ruled out. 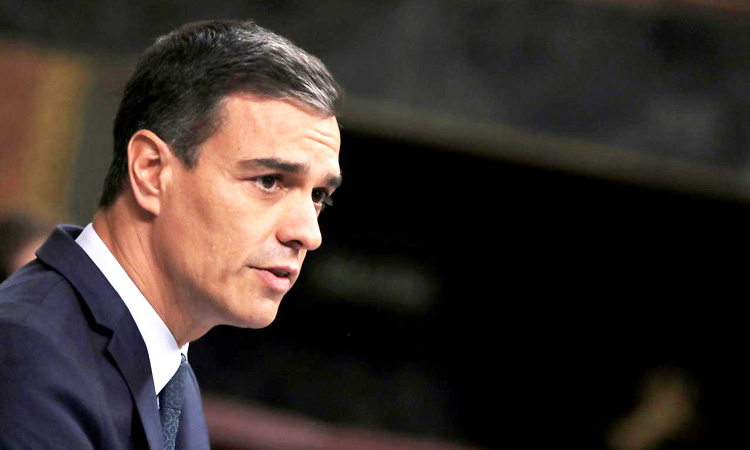 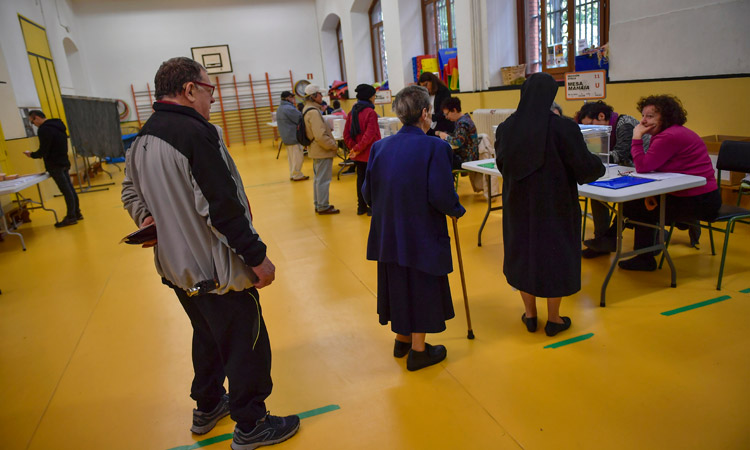