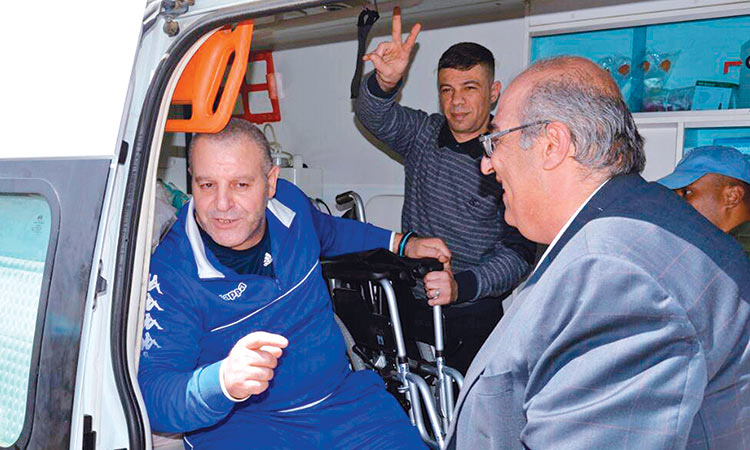 Zeidan Tawil (left) and Khamis Al Ahmad, giving a victory sign, as they arrive at the Quneitra crossing on Sunday. Associated Press

Israel’s military said the two prisoners were transferred to the Red Cross through the Quneitra crossing to Syria in the Israeli-occupied Golan Heights.

Israel’s prison service said the prisoners were Zidan Tawil, who was convicted of drug trafficking and was due to be freed in July, and Khamis Al Ahmed.

It said Ahmed is a Fatah member from Yarmuk refugee camp in Syria who was originally due to be freed in 2023 after he attempted to attack an Israeli army base in 2005.

Syrian state TV said the two prisoners, Zeidan and Khamis, arrived on the Syrian side of the Quneitra crossing after being released.

It showed a brief video of the two men, shortly after they were handed over to Syrian authorities.

State news agency SANA showed a photograph of the two men, one of them waving a victory sign from inside a vehicle that appeared to be an ambulance. An Israeli official speaking on condition of anonymity said on Saturday that Israel agreed to release the prisoners as a “goodwill gesture” after the return of the remains of soldier Zachary Baumel earlier this month.

The decision was not part of a pre-arranged deal, the official said.

But there were signs of a brewing controversy in Israel as some media reported that the prisoners’ release was sanctioned by the attorney general without cabinet approval.

Israel’s military announced on April 3 that Baumel’s remains, missing since the 1982 Lebanon war, had been returned, bringing to a close a highly sensitive case for Israelis.

Russian President Vladimir Putin said during a visit by Netanyahu that the remains had been found by the Russian and Syrian armies, in a context where Moscow has a military presence in Syria to support the regime of President Bashar Al Assad.

But Syrian Information Minister Imad Sara on April 4 said that Damascus had no knowledge of plans to repatriate the remains, nor was it aware of the details behind the discovery of the body and its subsequent transfer.