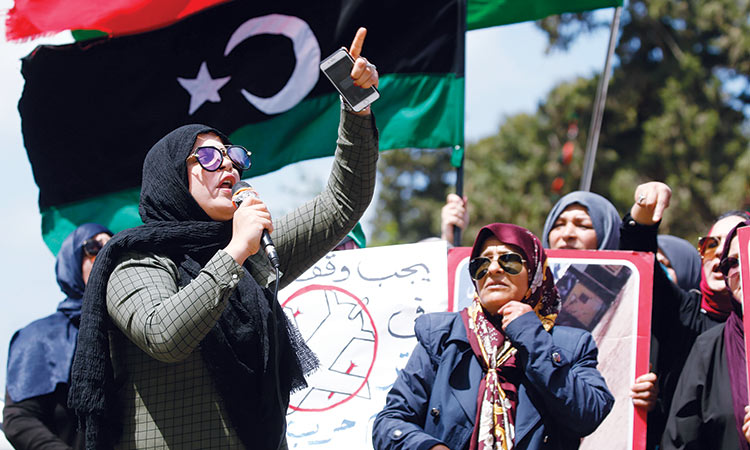 Libyans take part in a demonstration in front of the ministry of foreign affairs in Tripoli on Sunday. Agence France-Presse

But Amin Al Hachemi, a spokesman for the Government of National Accord’s (GNA) healthy ministry, on Sunday warned that “the death toll could increase in the coming hours.”

A pro-GNA military source said the victims were civilians.

“Most of the strikes hit areas in the district of Abou Slim... (but) none hit military targets.” Strongman Khalifa Haftar’s LNA launched an offensive against Tripoli, the seat of the GNA, on April 4.

But after initial gains, Haftar’s forces have encountered stiff resistance on the southern outskirts and his troops have been pushed back in some areas.

At least 278 people have been killed and more than 1,300 wounded in the clashes, according to a toll released Wednesday by the World Health Organisation (WHO).

The GNA accuses Haftar of using foreign planes to carry out air strikes, without naming a country of origin.

“This criminal conceals his failures and those of his soldiers at the gates of Tripoli by resorting to foreign aviation to hit unarmed civilians in the city,” spokesman Mohanad Younes said on the GNA’s official Facebook page.

Haftar’s offensive has sharpened fault lines in policy towards Libya among world powers.

On April 18, Russia and the United States opposed a British bid backed by France and Germany at the UN Security Council to demand a ceasefire in the North African country.

The White House revealed the next day that Donald Trump had reached out personally to Haftar in a phone call, during which the US president “recognised Field Marshal Haftar’s significant role in fighting terrorism and securing Libya’s oil resources.”

The country has been mired in chaos since the Nato-backed uprising that deposed and killed Mumammar Qadhafi in 2011.

Meanwhile, Pope Francis called on Sunday for the evacuation of refugees held in detention camps in Libya, particularly women and children, as fighting there escalates.

“I make an appeal that especially the women, children and sick can be evacuated as soon as possible through humanitarian corridors,” Francis said at the Sunday prayer at the Vatican.

Their situation “which is already very serious, has become even more dangerous due to the ongoing conflict,” he said.

A group of around 140 refugees is expected to arrive in Rome from Libya on Monday.

Humanitarian groups and international organisations are alarmed at the situation of thousands of migrants trapped in detention centres in Libya, as fighting rages between forces loyal to the Tripoli-based government of national unity and those loyal to Haftar.

Libya, long a major transit route for migrants desperate to reach Europe, is home to around 6,000 migrants who are held in official detention centres, according to the International Organisation for Migration (IOM).

Hundreds more are held by armed groups elsewhere in the war-hit country.

The UN and international aid groups have warned that thousands of migrants and refugees who fled violence at home and are now trapped in Libyan detention centres are facing enormous dangers and must be evacuated.

On Wednesday the UN refugee agency UNHCR said it had evacuated 325 asylum seekers from the Qasr Bin Ghashir detention centre a day after an attack against refugees and migrants. It was not clear who carried out the assault.

In a separate development, an Iranian registered cargo ship was boarded and searched at Misrata port in western Libya, the Tripoli-based government said on Saturday.

The “Iranian flagged... Shahr E. Kord” is docked at the country’s main commercial port, the internationally recognised GNA’s interior ministry said in a statement on its Facebook page.

The ship “is on a sanctions list of the US,” the statement added.

According to the US Treasury Department Office for Foreign Assets Control, the Shahr E. Kord was placed on a sanctions blacklist on November 5, 2018.