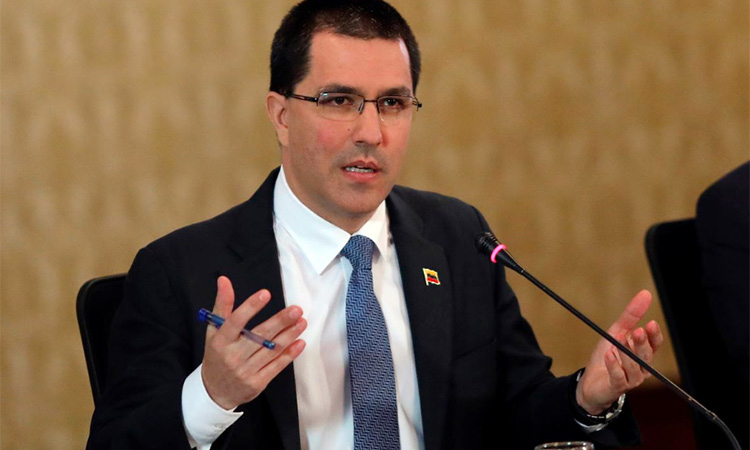 The United States on Friday imposed sanctions on Venezuela’s Foreign Minister Jorge Arreaza, saying it would pursue those in President Nicolas Maduro’s government for corruption as well as officials conducting diplomacy on his behalf.

Arreaza and a judge in the Court of Appeals for Caracas, Carol Padilla, were targeted in the latest round of US sanctions against Maduro’s government over the crisis in Venezuela, the Treasury Department said.

Washington blames Maduro for the country’s economic collapse and for undermining democracy. The Trump administration recognized Venezuela’s opposition leader Juan Guaido as the South American nation’s interim president and has asked Maduro, a socialist in power since 2013, to step down.

“The United States will not stand by and watch as the illegitimate Maduro regime starves the Venezuelan people of their wealth, humanity, and right to democracy,” Treasury Secretary Steven Mnuchin said in a statement.

“Treasury will continue to target corrupt Maduro insiders, including those tasked with conducting diplomacy and carrying out justice on behalf of this illegitimate regime.” Venezuela’s foreign ministry responded by “energetically” rejecting the sanctions, which it called “unilateral and illegal.” “With these new measures, the Trump administration is trying to silence Venezuela’s voice in the world,” the ministry said.

In a separate statement, the US Department of State said Friday’s designation was “a reminder” that Venezuelan authorities have detained Guaido’s top aide, Roberto Marrero, since March and that such actions would have consequences.

“If Nicolas Maduro and those aligned with him continue to use imprisonment and intimidation against the legitimate government and people of Venezuela, the United States will respond,” the department said, reiterating the US demand for Marrero’s release.

He is married to the eldest daughter of Hugo Chavez, Venezuela’s former president who died in 2013 of cancer. It was not immediately clear whether the sanctions would affect his travel to the UN.

On Thursday he addressed a meeting of the 193-member UN General Assembly on multilateralism.

He met with UN Secretary-General Antonio Guterres on Wednesday and discussed the humanitarian situation in the country, a UN spokesman said. Arreaza also met with Iranian Foreign Minister Mohammad Javad Zarif in New York on Wednesday.

He is active on Twitter, directly taking on US President Donald Trump and White House national security adviser John Bolton.

Arreaza linked the sanctions against him to his call at the United Nations the previous day against the US “criminal blockade” of Venezuela, saying the reaction he heard had shown him “that we walk the right path.”

“Today, the Trump administration responds with desperation against us. TRUTH hurts!” he tweeted.

Arreaza had warned of retaliation if the United States moves to expel leftist activists who are squatting as a protest in Venezuela’s embassy in Washington.

Maduro has survived three months of mounting pressure led by the United States, including efforts to deprive him of Venezuela’s financial lifeline of oil sales, and still enjoys critical backing from Russia and China.

Russia denounced what it called “brutal” US pressure on Venezuela.

“We exhort the United States to return to the realm of international law, end its politics of blackmail and stop provoking tensions in Venezuela from abroad,” the foreign ministry said in a statement.

“Washington has repeatedly displayed a catagoric refusal to adopt the method of negotiation to resolve the situation,” it said.

Maduro was re-elected in a vote widely condemned for irregularities. He presides over a crumbling economy, with inflation forecast to hit a mind-boggling 10 million percent this year and millions of Venezuelans having fled due to shortages of basic goods.