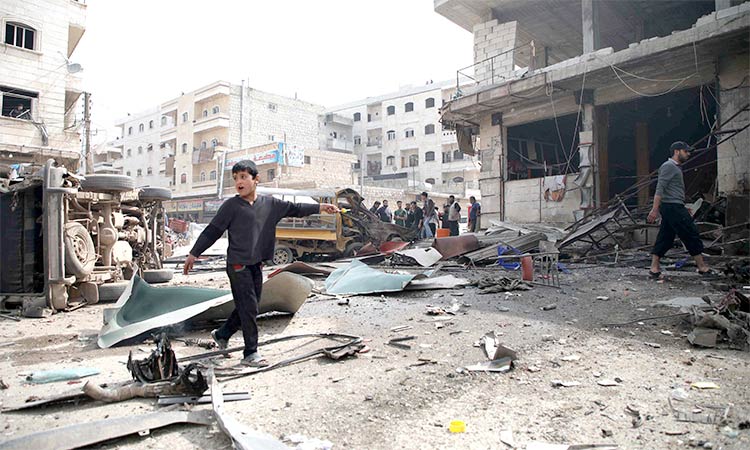 Attacks by two extremist groups killed at least 22 Syrian government troops and militiamen in the northern province of Aleppo early on Saturday, a war monitor said.

Thirty others were wounded in the assaults by Al-Qaeda’s former Syria branch, Hayat Tahrir Al-Sham (HTS), and its ally Hurras Al-Deen, which remains affiliated to the global extremist network, the Britain-based Syrian Observatory for Human Rights said.

The attacks in the southern and southwestern countryside of Aleppo province were launched shortly after midnight and triggered clashes that continued until dawn, Observatory head Rami Abdel Rahman said.

He said the fighting subsided after Russian aircraft struck extremist positions in the area, prompting the fighters to pull back.

Eight militants were killed, he added.

On Friday, Russian strikes killed 10 civilians in Idlib province, the hub of territory held by the militants of HTS in northwestern Syria.

Russia and rebel-backer Turkey in September inked a buffer zone deal to avert a massive government offensive on the Idlib region, but the deal has never been implemented.

The region of some three million people has come under increasing bombardment since HTS took full control of it in January.

The latest Russian air raids came after two days of talks on the Syrian conflict between Turkey, Russia and fellow government backer Iran in Kazakhstan earlier this week.

The three governments expressed concern over the growing power of HTS in Idlib and parts of adjacent provinces, and determination to cooperate to eliminate the extremist group.

The civil war in Syria has killed more than 370,000 people and displaced millions since it began with the bloody repression of anti-government protests in 2011.

Russian President Vladimir Putin said on Saturday he did not rule out Syrian forces, backed by Russian air power, launching a full-scale assault on militants in Syria’s Idlib province, but that such an operation was unpractical for now.

Russia, one of the Syrian government’s staunchest allies, and Turkey brokered a deal in September to create a demilitarised zone in the northwest Idlib region that would be free of all heavy weapons and extremist fighters.

The deal helped avert a government assault on the region, the last major bastion of opponents of President Bashar Al Assad.

But Moscow has since complained about escalating violence in the area and said that militants who used to belong to the Nusra Front group are in control of large swaths of territory.

Speaking in Beijing, Putin said that Moscow and Damascus would continue what he called the fight against terrorism and that any militants who tried to break out of Idlib, something he said happened from time to time, were bombed.

But Putin said the presence of civilians in parts of Idlib where militants were also active meant the time was not yet ripe for full-scale military operations.

“I don’t rule it (a full-scale assault) out, but right now we and our Syrian friends consider that to be inadvisable given this humanitarian element,” Putin told reporters.

Moscow is keen to help Assad retake territory, including eventually Idlib province, but Turkish President Tayyip Erdogan has argued against a Russian-backed offensive in a region that borders his own country.

Ankara is concerned about potential refugee flows from Idlib in the event of a military operation, and wants to retain its influence there.

Air strikes by Syrian regime ally Russia killed 10 civilians in the militants-held northwestern region of Idlib on Friday, a monitor said, as unsuccessful peace talks ended in Kazakhstan. The raids killed three civilians including a boy on the outskirts of the town of Kafranbel, and seven including a girl in the town of Tal Hawash, the Britain-based Syrian Observatory for Human Rights said.

Syria’s civil war has killed more than 370,000 people since it started in 2011, and endless rounds of negotiations have failed to stem the bloodshed.

The Damascus regime has won back large parts of the country from rebels and militants since Russia intervened in the war in 2015.

But several key areas remain beyond government reach, including Idlib, which is controlled by a former Al Qaeda affiliate.