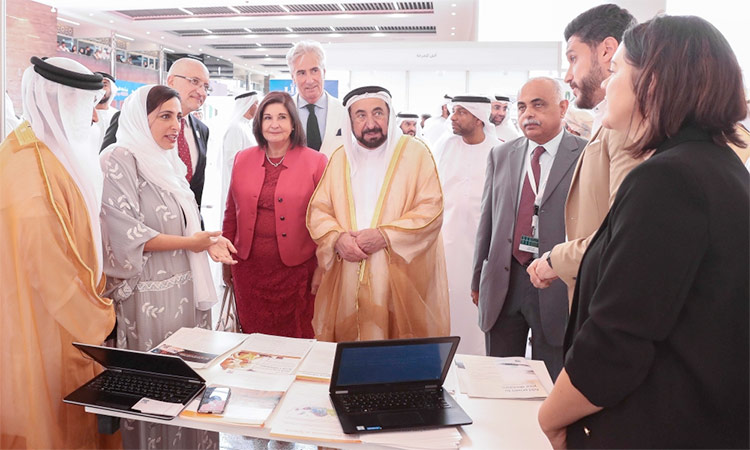 Sheikh Sultan with Sheikha Bodour and dignitaries at the conference event.

His Highness Dr Sheikh Sultan Bin Mohammed Al Qasimi, Member of the Supreme Council and Ruler of Sharjah, accompanied by Sheikha Bodour Bint Sultan Al Qasimi, Vice President of the International Publishers Association and Founder and President of the Emirates Publishers Association, attended the fourth Regional Conference of the International Federation of Library Associations and Institutions (IFLA) in the Arab World that commenced in Sharjah on Thursday. The conference is part of the Sharjah World Book Capital 2019 activities.

Guests from various Arab countries, library professionals, digital sector experts and members of the media attended the opening ceremony of the fourth Regional Conference of the International Federation of Library Associations and Institutions, IFLA, in the Arab World in Sharjah on Thursday.

During his opening address, Ahmed Bin Rakkad Al Ameri, Sharjah Book Authority Chairman, shed light on Sharjah’s farsighted leadership in making libraries a pillar of knowledge and education since 1909. “We are keen on providing librarians from the Arab world with the knowledge and support to develop this sector under the leadership of His Highness, the Ruler of Sharjah,” he said.

The two-day conference, being held under the theme “Impact of IT and Digital Knowledge on Arab Organisations and Business Environment” is being held in collaboration with the SBA on the sidelines of the Sharjah Children’s Reading Festival, SCRF 2019, at the Expo Centre Sharjah.

Dr Khalid Alhabi, President of IFLA in the Arab World, said that the organisation’s efforts in enabling the forging of new partnerships in this sector have played a crucial role in spreading knowledge and awareness among societies. He added, “Sharjah has taken an important step forward under the vision and directives of His Highness, the Ruler of Sharjah, in collaborating with the Asian Federation of Library Associations, AFLA, to organise this conference, which will further the work of these educational resource centres and integrate their efforts.”

The last speech at the inaugural ceremony was by Gloria Perez-Salmeron, IFLA President.

Sharing her experiences after working as a librarian over the years, she said, “For centuries, libraries and librarians have given people access to information, enabling them to contribute to the development of society. I hope that through this conference, we will integrate key aspects of this sector into a global vision.”

Inviting attendees to the next conference in Athens, Greece, she noted, “As leaders of the library sector, it is our duty to continue to learn and improve, in tandem with technological advancements. Working together is imperative, as that will help us stay ahead of challenges. Therefore, I urge everyone to engage with the IFLA to support our mission.”

The London Book Fair, LBF, a global celebration of literature and publishing, has announced the Emirate of Sharjah as the ‘Market Focus’ at the 2020 LBF. Over 40 countries and regions from across the globe participated in the LBF 2019, including Mexico, South Africa, China, Australia, Korea, and Market Focus 2019, Indonesia.

The LBF Market Focus 2020 programme will include cultural events celebrating Emirati authors and books. It will also feature a professional networking programme for UK and international publishers to meet their UAE counterparts and explore partnership opportunities and look into ways to expand into global markets.

“We are delighted to be the LBF’s Market Focus in 2020, as it gives us yet another opportunity to reinforce the vision of Dr. Sheikh Sultan bin Muhammad Al Qasimi, Supreme Council Member and Ruler of Sharjah, to strengthen bridges of cultural communication around the world,” said Ahmed bin Rakkad Al Ameri.