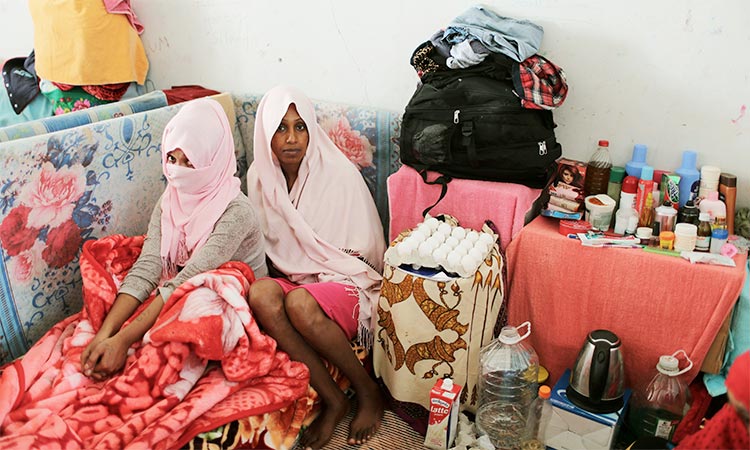 Migrants are seen at the Anti-Illegal Immigration Agency in Tajora centre in Tripoli on Wednesday. Reuters

The fighting in Libya’s capital has reached a detention centre holding hundreds of detained migrants and refugees, the UN said on Tuesday.

Stephane Dujarric, a spokesman for the UN secretary-general, said the UN aid agency has received reports that the Qasr Ben Ghashir detention center, holding some 890 refugees and migrants, was “breached by armed actors.” The facility is 20km south of central Tripoli.

“The situation in these detention centres is increasingly desperate, with reports of guards abandoning their posts and leaving people trapped inside,” Dujarric said, adding that one facility has been without drinking water for days.

He told Russian news agencies that Moscow is asking the LNA to cease fire and “restore a dialogue and political efforts” promoted by the United Nations.

He said the operation to retake Tripoli would require no more than two or three more weeks.

Russia’s military has long voiced backing for Haftar, the powerful commander of the Libyan National Army (LNA), who dominated eastern Libya and in early April launched an offensive on Tripoli, which is held by an internationally recognised government.

A Russian defence ministry official guided Al Tamimi through a crowd of delegates and assisted in setting up interviews, including a live broadcast on a Russian state TV channel.

In an interview with the RIA Novosti news agency, he said the LNA supports the idea of a national election but that such a vote can only be held after the capital is “liberated.”

Asked about military support from Russia, Al Tamimi said: “Russia can’t do anything before the (arms) embargo is lifted. After the embargo is lifted, we are going to boost our cooperation.”

Tamimi was attending a conference organised by the Russian defense ministry in Moscow.

Separately, Italy’s government has written to the European Union (EU) asking it to ready a plan of action to deal with a possible flight of refugees from the armed conflict in Libya, Italian Foreign Minister Enzo Moavero said on Wednesday.

Moavero was speaking at a joint news conference in Rome after talks with the UN envoy on Libya, Ghassan Salame.

He referred to a EU treaty which he said would oblige the bloc to help Italy if it were to be swamped with refugees from Libya.

Under the treaty, each member state would be required to receive a share of the refugees arriving there.

Salame voiced hope on Wednesday that efforts to establish a peace dialogue between the country’s two warring sides could bear fruit within the next two weeks.

Salame said that contacts had been established and he hoped to see results before the Holy Month of Ramadan begins in early May.

“I hope that the contacts we have established or re-established among the two belligerents can bear fruit before the holy month of Ramadan,” Salame told a news conference. Salame, visiting Rome to enlist support from Libya’s former colonial power for a possible ceasefire, did not elaborate on the nature of the contacts with the two warring groups.

Speaking to French dailies Liberation and Le Monde, Sarraj denounced Paris for backing a “dictator” in his harshest criticism yet of French diplomacy.

“We are surprised that France does not support our government that is democratic, but supports a dictator,” Sarraj told the newspapers in comments published in French on Wednesday.

“When (French president) Emmanuel Macron called me, I warned him that public opinion was against France. We don’t want Libyans to hate France. France still has a positive and important role to play,” he said.