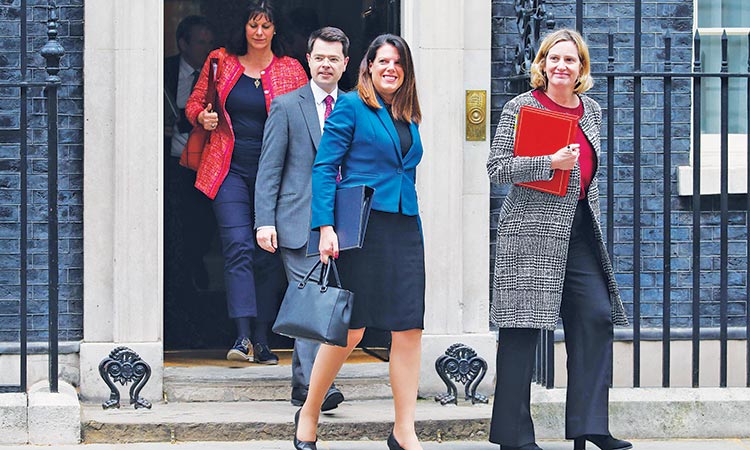 She is the younger sister of former foreign secretary Boris, who is favourite to take over as prime minister after current leader Theresa May steps down once the first phase of Brexit is completed.

“I’m sure that Boris understands why this is not a vote against Boris,” she said, telling London’s Evening Standard newspaper she felt “impelled to stand up and be counted for what I believe in”.

The ardent European Union supporter once said she would “walk down Whitehall in my birthday suit to stop Brexit.”

She now writes a weekly column in The Mail on Sunday, and was unveiled on a roster of candidates for Change UK at an event in Bristol in southwest England.

Boris Johnson was a key figure helping swing the 2016 referendum vote in favour of Leave.

He has criticised May’s withdrawal deal struck with the EU for keeping Britain too closely tied to the bloc, putting him at odds with other members of his family.

His brother Jo, also a Conservative politician, quit as a minister in November, believing May’s deal would sever too many ties with the EU.

He has since backed calls for a second referendum on the issue.

The power of Brexit to cut across family bonds — even if on the same side — was also evident earlier this month.

Annunziata Rees-Mogg, brother of influential Conservative Brexiteer Jacob Rees-Mogg, announced she was leaving the party to stand as a candidate for Nigel Farage’s new Brexit Party.

Her brother tweeted that “Annunziata would be a brilliant prime minister but I hope as a Tory”.

It was revealed she has been a member of the Conservatives since the age of five.

A new anti-Brexit political party launched its campaign Tuesday for next month’s European elections as British lawmakers return from their Easter break as fresh bids to topple Prime Minister Theresa May mount.

The government and the main opposition Labour Party are also set to resume talks later Tuesday in an attempt to find agreement over Brexit after weeks of negotiations showed little signs of progress.

Britain is mired in a deep political crisis over its departure from the European Union, three years after a divisive referendum that voted to pull Britain out of the bloc after nearly half a century.

May was forced to ask EU leaders earlier this month to postpone Brexit for a second time — from April 12 to October 31 — after MPs repeatedly rejected the divorce deal she has struck with Brussels.

She is still hoping to persuade Labour to support the plan so the country can leave in time to avoid taking part in the European Parliament elections on May 23.

But with one month to go, few are expecting a consensus to emerge and Britain’s political parties old and new are scrambling to organise for the upcoming polls.

Change UK, formed by breakaway MPs from Britain’s two main parties disgruntled at their stances on Brexit, unveiled a roster of candidates at an event in Bristol in southwest England.

Rachel Johnson told London’s Evening Standard newspaper she felt “impelled to stand up and be counted for what I believe in”.

Veteran journalist Gavin Esler, who spent decades reporting for the BBC, is also among those standing, saying he was “seriously worried about the future of our country”.

“This is the home of the Remain alliance,” she said, adding the elections are a chance to reiterate the need for a second referendum on Brexit.