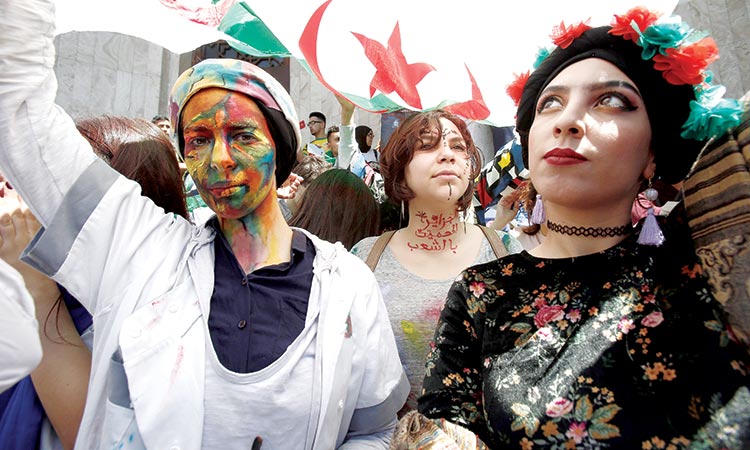 Thousands of Algerian students marched on Tuesday through the capital calling for the overthrow of the “system” and trials for members of ousted president Abdelaziz Bouteflika’s inner circle.

The rallies came as state media reported that Algeria’s richest man has been detained in jail after his arrest as part of a corruption probe and Sunday’s arrest of four other business tycoons. Some have close links to Bouteflika’s entourage.

Algeria’s army chief said he welcomed an anti-graft drive against figures close to Bouteflika, state TV reported, a day after the authorities announced the arrest of five business tycoons.

Army Chief Ahmed Gaid Salah played a role in Bouteflika’s resignation by calling for him to be removed from office, and has since called for a crackdown on corruption.

Students chanting “out with the government” gathered outside the iconic post office in the heart of Algiers as they have every week since the Bouteflika stepped down on April 2 in the face of mass protests against his 20-year rule.

The police dialled down the security presence at the site after deploying en masse last Tuesday to prevent protesters from reaching what has become the emblematic point of rallies since anti-government demonstrations first erupted in February.

“Either it’s us, or it’s you. Out with the government!” chanted students, many of them drapped in Algeria’s national flag.

Algerians are demanding a complete overhaul of the political system in the North African country, including the ouster of an interim government set up in the wake of Bouteflika’s fall.

They are demanding that regime stalwarts be excluded from any political transition in the country, where presidential elections are due to take place on July 4 according to acting president Abdelkader Bensalah.

“We demand the departure of the entire gang that inherited Bouteflika’s reign, headed by Bensalah and (Prime Minster) Noureddine Bedoui,” said Hamza, a third-year civil engineering student at the University of Blida south of the capital.

“We want a new system that is committed to fighting the corruption that has plagued the country,” said Hamid, a finance student in Algiers.