Haftar forces slow down its push on Libya capital - GulfToday

Haftar forces slow down their push on Libya capital 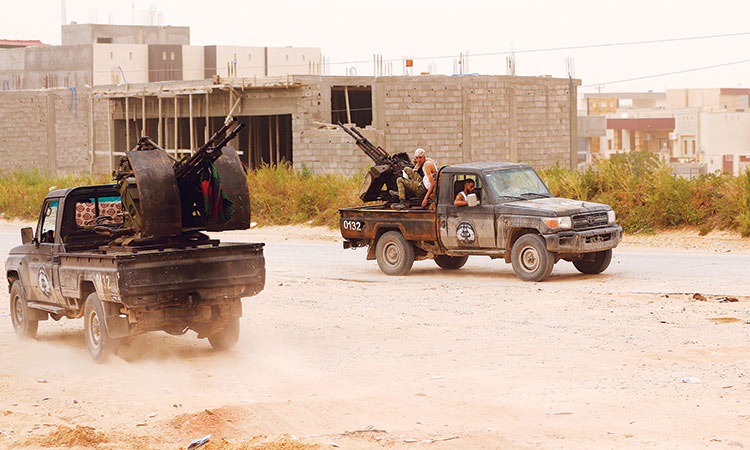 Libya government forces take position during the fighting in Ain Zara in Tripoli on Sunday. Reuters

A self-styled Libyan army slowed down its push on the country’s capital over concerns for civilians caught up in the violence as the UN refugee agency said on Monday that the fighting for Tripoli has displaced more than 32,000 people.

Fighting erupted on April 5, pitting the self-styled Libyan National Army, led by commander Khalifa Haftar and aligned with a rival government in the east, against militias affiliated with Tripoli’s UN-supported government.

The clashes threaten to ignite a new civil war in Libya on the scale of the 2011 uprising that toppled and killed longtime ruler Muammar Qadhafi.

The death toll from this month’s fighting climbed to 254, including combatants and civilians, the World Health Organisation (WHO) said on Sunday.

Since launching his push, which many see as a power grab for Tripoli, Hifter’s forces have captured the districts of Gharyan and Qasr Bani Ghashir along with several smaller towns. They also seized the capital’s shuttered old airport.

Fighting is now underway for control of Ain Zara and Azizyia, two larger towns near Tripoli, and in the Abu Salim district, about 7 kilometres from Tripoli center.

Abdelhadi Lahouij, the top diplomat for the east-based government, told The Associated Press in Tunis on Sunday that Haftar’s push was slowed down because of concerns for civilians in the greater Tripoli area, estimated to number about 3 million.

If the civilians had not been taken into account, the battle would not have lasted even a week, he said.

“The army is today 20 kilometres from Tripoli. It controls the (old) airport and the bridge that connects the airport to the city center,” Lahouij said.

A White House statement on Friday also said “the two discussed a shared vision for Libya’s transition to a stable, democratic political system.”

Trump’s phone call was a step “in the right direction,” Lahouij said.

Meanwhile, Libyan airport authorities said on Monday that day-time flights will resume at Tripoli’s only functioning airport after it was closed to all but night-time traffic earlier this month for “security reasons.”

“We have received the order to open air space at Mitiga International Airport 24 hours a day”, the airport said on its official Facebook page.

Mitiga airport had been closed between 0600 GMT and 1500 GMT daily after an April 8 air strike claimed by Haftar’s self-styled Libyan National Army.

Haftar on April 4 launched an offensive to take the capital Tripoli, the seat of the internationally recognised Government of National Accord (GNA).

The airport was also closed for several hours on Saturday night, resulting in the re-routing of at least two flights to Misrata over 200 kilometres away, as fighting intensified after a counter-attack by forces loyal to the GNA and amid reports of new air strikes.

The capital’s main airport was destroyed in fighting in 2014.

Mitiga airport is on a former military base on the city’s outskirts, and it was forced to close several times because of clashes between militias last year.

In yet another development, Libya’s unity government has bitterly criticised France for its stand in the offensive on Tripoli by the forces of  Haftar, accusing Paris at least tacitly of backing the military strongman.

His comments triggered surprise, and a swift denial from the French embassy that the allegations were “unfounded”.

But while France’s role remains ambiguous, analysts say Paris sees Haftar and his self-style Libyan National Army as a potential stabilising force in a country rocked by years of conflict.

“Since 2016 the GNA has made no headway in addressing the problems it was meant to solve first, i.e. breaking the vice grip of the militias over Tripoli, containing extremism, and stopping the free-fall of the Libyan economy,” former US diplomat Ethan Chorin told AFP.