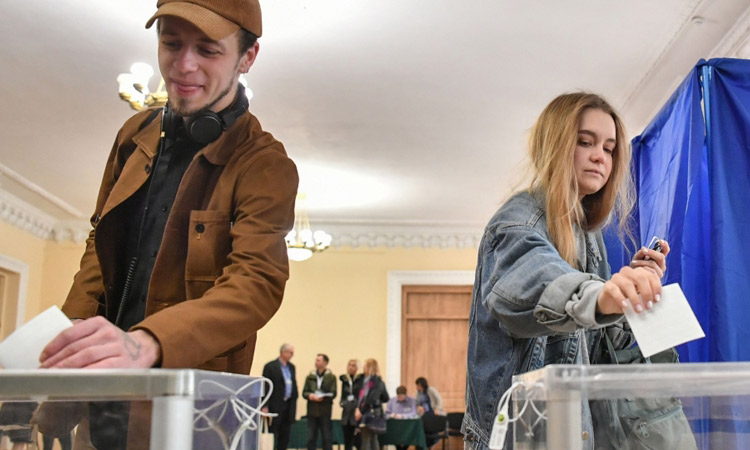 At stake is the leadership of a country on the frontline of the West's standoff with Russia following Moscow's annexation of Crimea and support for a pro-Russian insurgency in eastern Ukraine.

Surveys make Volodymyr Zelenskiy, who plays a fictitious president in a TV series, the runaway favourite to defeat incumbent Petro Poroshenko, whose popularity has been hurt by patchy efforts to halt corruption and sliding living standards.

Both men — who traded insults and accusations in a rowdy debate in a soccer stadium in Kiev on Friday — have pledged to keep Ukraine on a pro-Western course.

But a victory for Zelenskiy would be a dramatic departure for a country whose previous presidents since its 1991 independence have been experienced politicians, including three former prime ministers. 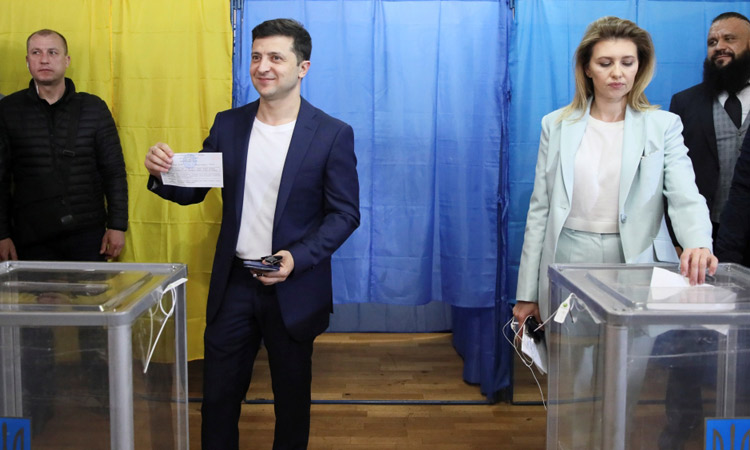 Volodymyr Zelenskiy and his wife Olena hold ballots as they visit a polling station in Kiev on Sunday. Volodymyr Petrov / Reuters

Investors are seeking reassurances that whoever wins will accelerate reforms needed to attract foreign investment and keep the country in an International Monetary Fund programme that has supported Ukraine through war, recession and a currency plunge.

"We want change in a better direction, because right now there is tension, people are irritated. We want peace, freedom and happiness," said voter Zinaida Statnikova.

A smiling Zelenskiy turned up to vote dressed in a white T-shirt and jacket. "We have united Ukraine," he said. No matter the result, "it will be a victory for the Ukrainian people." 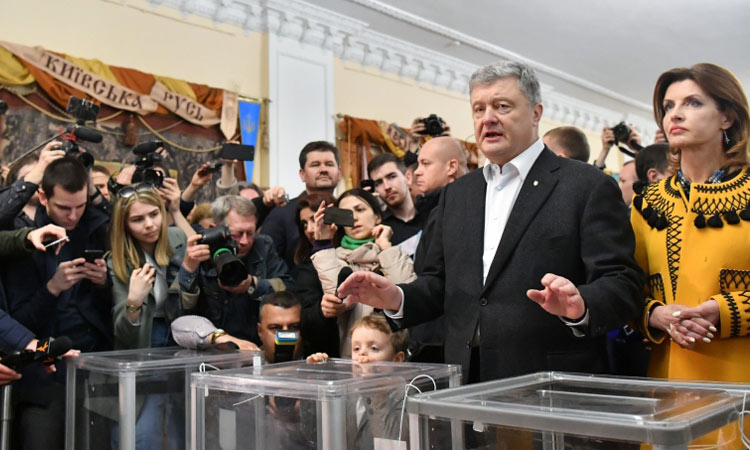 Petro Poroshenko talks to the press next to his wife Maryna after casting his ballot at a polling station in Kiev on Sunday. AFP

"We have united Ukraine." No matter the result, "it will be a victory for the Ukrainian people

"It is very important to be guided by reason during the vote. Because it's not funny. At first maybe it seems funny and fun, but it should not be painful later," he said after voting.

Voter Egor Binkevych wants a candidate to at least try to tackle the issue of corruption. "More than anything I would like for the structure of our country to change, the whole system," he said.

The 41-year-old Zelenskiy's unorthodox campaign traded on the character he plays in the TV show, a scrupulously honest schoolteacher who becomes president by accident after an expletive-ridden rant about corruption goes viral.

His campaign relied on quirky social media posts and comedy gigs instead of traditional rallies and leafletting.

Zelenskiy has promised to fight corruption, a message that has

resonated with Ukrainians fed up with the status quo in a country of 42 million people that is one of Europe's poorest nearly three decades after breaking away from the Soviet Union.

He has also spoken of the need to try to find a way to end the war against pro-Russian separatists by holding wider Western-backed talks with President Vladimir Putin.

An elderly woman gets her ballot paper in her house in western Ukrainian city of Lviv on Sunday. Yuri Dyachyshyn / AFP

A young woman casts her ballot at a polling station in Kiev on Sunday. Genya Savilov / AFP

A boy casts his mother vote at a polling station in Kiev on Sunday. Valentyn Ogirenko / Reuters

A girl casts her mother vote at a polling station in Kiev on Sunday. Valentyn Ogirenko / Reuters

A female serviceman has her ballot checked at a polling station in the Azov Sea city of Mariupol. Evgeniya Maksymova / AFP

Petro Poroshenko and his wife Maryna cast their votes at a polling station in Kiev on Sunday. Sergei Supinsky / AFP

A woman holds her son prior to casting her ballot paper at a polling station in Kiev on Sunday. Sergei Supinsky / AFP

Ukrainian citizens living in Kyrgyzstan vote at a polling station in the Ukrainian embassy in Bishkek on Sunday. Vyacheslav Oseledko / AFP

Volodymyr Zelenskiy speaks with journalists as he visits a polling station in Kiev on Sunday. Valentyn Ogirenko / Reuters

Zelenskiy's rise comes at a time of political upheaval in many parts of the world, from Brexit to the election of US President Donald Trump, the 5-Star Movement in Italy — also inspired by a comedian — and the rise of the far right there, in France and in Spain.

Just 9 per cent of Ukrainians have confidence in their national government, the lowest of any electorate in the world, according to a Gallup poll published in March.

Poroshenko was elected amid high hopes for change. O'Hagan says he inherited a difficult situation. He implemented many reforms, but did not convince voters he was serious about tackling corruption, she said.

Meanwhile, Zelenskiy remains something of an unknown quantity and faces scrutiny over his ties to a powerful oligarch called Ihor Kolomoisky, whose TV channel broadcasts his shows.

"It is very important to be guided by reason during the vote. Because it's not funny. At first maybe it seems funny and fun, but it should not be painful later

Poroshenko calls Zelenskiy a "puppet" of Kolomoisky and the comedian has been forced to fend off suggestions he might help Kolomoisky win compensation or regain ownership of PrivatBank, Ukraine's largest lender, which was nationalised in 2016.

Poroshenko, 53, has also sought to portray Zelenskiy as a buffoonish populist whose incompetence would leave Ukraine vulnerable to Russia.

Ukrainian troops have battled Kremlin-backed separatist fighters since 2014 in a conflict in the eastern Donbass region that has killed 13,000 people despite a notional ceasefire.

Viktor Medvedchuk, the Kremlin's closest ally in Ukraine, last week outlined ways in which Ukraine and Russia could mend ties in the event of a Zelenskiy presidency, though Zelenskiy has given no indication of being open to the offer. 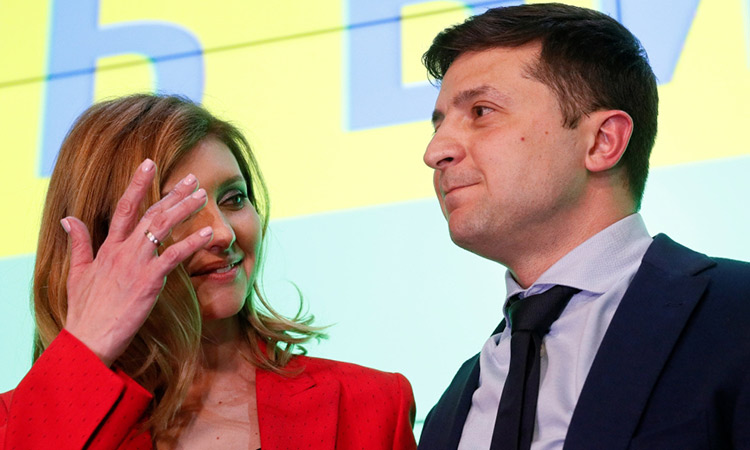 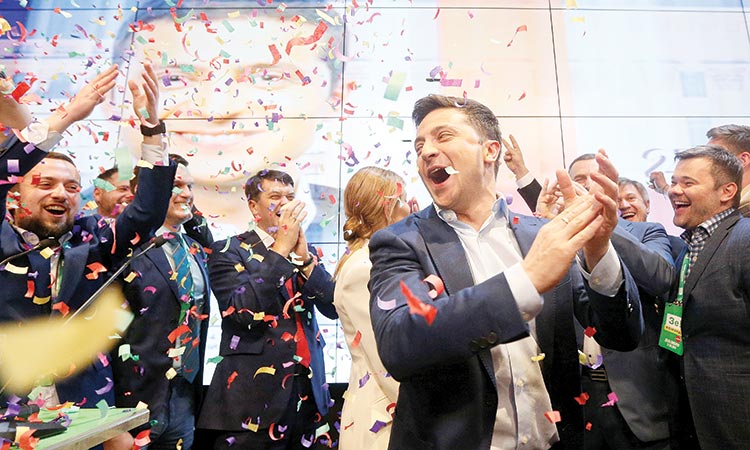