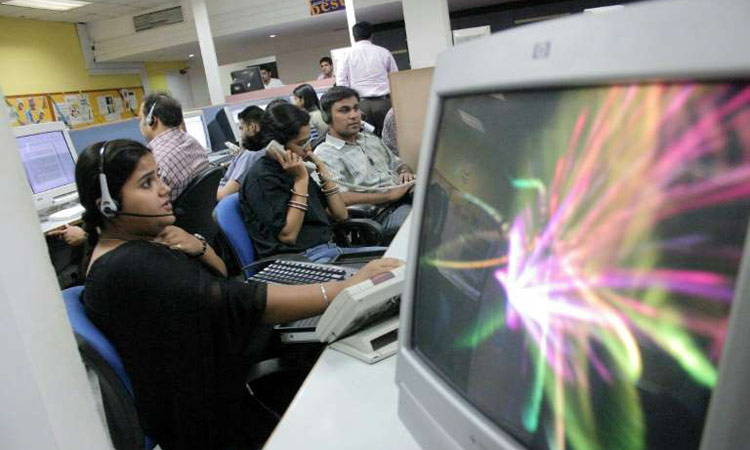 Workers in a call center in India. File photo/ AFP

The US government is taking aim at the “India-based call centre scam industry,” Assistant Attorney General Brian Benczkowski has warned while announcing the extradition of an Indian citizen from Singapore allegedly involved in a multi-million dollar racket.

Hitesh Madhubhai Patel, 42, who operated the HGlobal call centre in Ahmedabad, was extradited to face trial on charges relating to the scam that allegedly ripped off thousands of Americans of millions of dollars using people in call centres impersonating US government officials, the Justice Department said on Friday.

Patel was arrested and produced on Friday in a federal court in Houston, Texas, where Magistrate Judge Peter Bray remanded him to custody, according to a court document obtained by IANS. He is to appear in court again on Wednesday.

“This extradition once again demonstrates the (Justice) Department’s unwavering commitment to disrupt and dismantle the India-based call centre scam industry and to work with our foreign partners to hold accountable those who perpetrate schemes that defraud our citizens,” Benczkowski said.

He added that “Patel operated a call centre that allegedly preyed upon vulnerable US citizens as part of a massive fraud scheme.”

After Patel flew from India to Singapore, he was arrested there on Sept.21, 2018, at the request of the US, and Singapore Law Minister K. Shanmugam issued a warrant on March 25 to hand him over to America, the Justice Department said.

“This historic extradition should serve as notice to transnational criminal organisations of the lengths DHS (Department of Homeland Security) is willing to go to arrest those who would enrich themselves by extorting the most vulnerable in our society,” said David Green, the Special Agent in charge of the DHS Houston Field Office.

He warned of global action against the owners, managers and employees of overseas call centres, saying: “Our pursuit of justice for victims of their scams does not stop at the water’s edge.”

Patel was charged in 2016 along with 55 people, most of them of Indian descent, and five companies in the alleged massive scam.

The India-based call centres allegedly impersonated tax or immigration officials and called people in the US and threatened them with arrest or deportation if they did not pay what they claimed were back taxes or fines, according to the chargesheet filed against them.

When their victims agreed to pay, the people at the call centre arranged for payments to be collected in the form of store cards or wire transfers by their co-conspirators in the US, who cashed them often using stolen identities and laundered the money, according to the charges.

In other instances, they offered people fake loans and collected fees for the lending that never materialised.

Since 2013, the tax official impersonation scam “has been on a relentless path, claiming more than 15,000 victims who have collectively suffered over $75 million in losses,” said Treasury Inspector General J. Russell George.

Federal agencies have identified 140 scammers, including Patel, “who have preyed upon taxpayers,” he added.

The fraud calls originating from India that are received by millions of Americans are hurting the country’s reputation as a hub for back office, tech support and call centre operations.

In recent weeks, at least three persons of Indian descent have been sentenced to prison terms in cases of tax official impersonation.

A federal court in Florida sentence an Indian on Thursday to eight and a half years in prison and last month another person of Indian origin to eight years and nine months.

In a separate case, Indian was sentenced to 16 months in prison by a federal judge in Atlanta earlier this month.