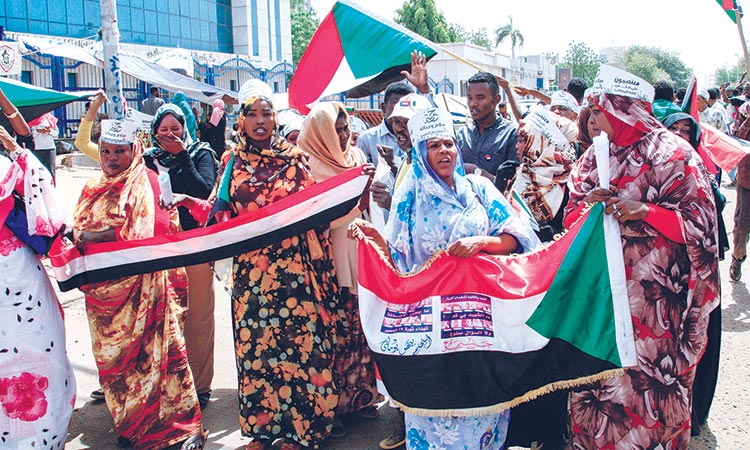 Women chant slogans during a rally outside the army headquarters in Khartoum on Saturday. Agence France-Presse


The talks come on the eve of the protest leaders’ planned announcement of a ruling civilian council that they say will replace the military body.

“The military council will hold talks with the Alliance for Freedom and Change at 8:00pm (1800 GMT),” Siddiq Yousef, a senior member of the umbrella group leading the protest movement, said.

Since the ouster of veteran president Omar Al Bashir by the army on April 11, Sudan has been ruled by a 10-member military council.

But protesters, who have camped outside the army headquarters in central Khartoum, demand that the council hand over power swiftly to a civilian body.

Another member of the Sudanese Professionals Association (SPA) that launched the initial campaign against Bashir confirmed that talks would take place on Saturday.

“Five representatives from the alliance will go today to the military council to discuss with them the transfer of power to civilian rule,” Ahmed Al Rabia said.

He said if the military rulers refused to hand over power, then the protest leaders would go ahead with their planned announcement of a “sovereign civilian council” on Sunday.

“If they are willing to negotiate, then there is a chance that tomorrow’s announcement could be postponed,” Rabia said.

“What we want from them is a timetable to hand over power, so things don’t drag.”

He said that since the ouster of Bashir, the military council has held two rounds of talks with the protest leaders.

“During these talks we’ve felt that the military council has no desire to hand over power,” Rabia said.

On Friday, the SPA announced it would name members of a civilian ruling council at 1700 GMT on Sunday outside the army complex where thousands have camped since April 6, first demanding the ouster of Bashir and now against the military council.

“We are done with the easy part (of toppling Bashir). We want to remove the entire regime,” said Rabia.

The military council has so far appeased the protesters by agreeing to some of their demands like detaining Bashir, lifting a night-time curfew and releasing many political detainees and protesters held during the demonstrations against the longtime leader.

Prominent Sudanese journalist Khalid Tijani said the protest leaders were also in a “tough situation” over finalising the civilian council.

“If they are not ready with the names, it will send a negative signal, and this will not be to the benefit of the revolution,” said Tijani, editor of economic weekly Elaff.

Calls for handing over power to a civilian body have also come from the international community, including the United States.

Washington is sending Makila James, assistant secretary of state, to Khartoum for an on-the-ground assessment of the situation.

Washington’s short-term goal is to “get the military folks out of centre-stage,” a senior US official said on condition of anonymity earlier this week.

The official called for transitional authorities to prepare the way for “a truly democratic government that will reflect the will of the Sudanese people.”

Meanwhile, Sudan’s public prosecutor has begun investigating Bashir on charges of money laundering and possession of large sums of foreign currency without legal grounds, a judicial source said on Saturday.

The source said that military intelligence had searched Bashir’s home and found suitcases loaded with more than $351,000 and six million euros, as well as five million Sudanese pounds.

“The chief public prosecutor ordered the (former) president detained and quickly questioned in preparation to put him on trial,” a judicial source said.

“The public prosecution will question the former president in Kobar prison,” the source added.