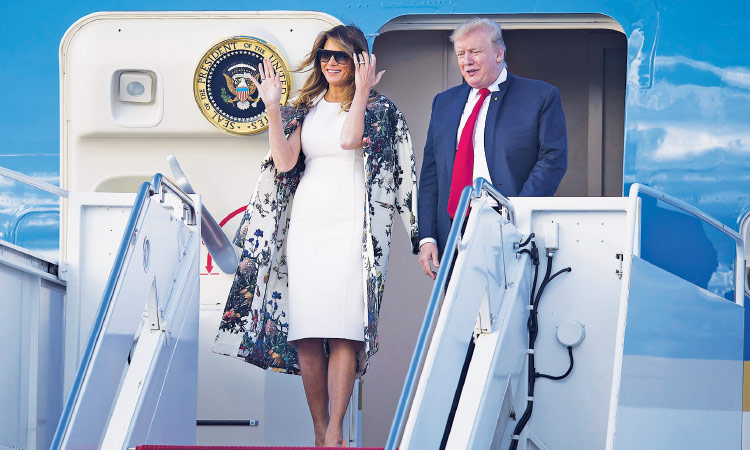 US President Donald Trump on Friday dismissed unfavorable testimony in the US Special Counsel Robert Mueller report on Russian election interference as “fabricated” and labelled the document “crazy.”

“Statements are made about me by certain people in the Crazy Mueller Report, in itself written by 18 Angry Democrat Trump Haters, which are fabricated & totally untrue,” the president tweeted.

Meanwhile, Congressional Democrats on Friday demanded to see all of Mueller’s evidence, as they consider how to use the probe’s findings against Trump.

A 400-page document outlining the findings of Mueller’s 22-month investigation, made public on Thursday, cleared Trump of criminal conspiracy but left open whether he had obstructed justice.

Mueller’s report recounts 10 episodes involving the president and potential obstruction of the investigation.

After reviewing the document, Attorney General Bill Barr and his deputy Rod Rosenstein concluded there was insufficient evidence to charge the president with obstruction.

Mueller, however, noted that while he was following Justice Department policy in not charging Trump, the evidence he gathered “does not exonerate” the Republican president.

Trump initially celebrated the publication of the report — which landed as the United States dives into the ferment of a bitter presidential campaign — saying at the White House that he was “having a good day.”

But he was in a more defensive mood Friday, as he prepared for a long Easter weekend at his Florida golf resort, insisting that he had done nothing wrong.

“Because I never agreed to testify, it was not necessary for me to respond to statements made in the ‘Report’ about me, some of which are total bullshit & only given to make the other person look good (or me to look bad),” Trump added, repeating his description of the investigation as an “Illegally Started Hoax.”

Mueller said in his report that Trump’s “efforts to influence the investigation were mostly unsuccessful, but that is largely because the persons who surrounded the president declined to carry out orders or accede to his requests.”

The episodes of potential wrongdoing, which will now be examined by the Democrat-led House of Representatives, include the firing of FBI chief James Comey, Trump’s efforts to remove Mueller and his attempts to prevent disclosure of emails about the infamous 2016 Trump Tower meeting between Russians and senior campaign officials.

Democrats meanwhile have demanded action against Barr, arguing that Mueller’s report undercut some of the attorney general’s key claims about the obstruction issue and the White House’s cooperation with the investigation.

“There are at least four significant ways that Mr Barr has misled the public on the contents of the Mueller report,” Senate Democratic Leader Chuck Schumer and House Speaker Nancy Pelosi said in a joint statement. Eric Swalwell, a California congressman, called for Barr’s resignation while several others berated him.

They accused Barr of suggesting publicly and falsely that Mueller had not intended for Congress to resolve the obstruction issue.

House of Representatives Judiciary Committee Chairman Jerrold Nadler, a Democrat, issued a subpoena to the Justice Department to hand over the full Russia report by Mueller, saying he cannot accept a redacted version released on Thursday that “leaves most of Congress in the dark.”

“My committee needs and is entitled to the full version of the report and the underlying evidence consistent with past practice. The redactions appear to be significant. We have so far seen none of the actual evidence that the Special Counsel developed to make this case,” Nadler said in a statement.

The Democrats’ subpoena gives Barr until May 1 to produce the materials requested.

Democratic leaders played down talk of impeachment just 18 months before the 2020 presidential election, even as some prominent members of the party’s progressive wing, most notably US Representative Alexandria Ocasio-Cortez, promised to push the idea.

Former FBI director Mueller also concluded there was not enough evidence to establish that Trump’s campaign engaged in a criminal conspiracy with Moscow to sway the 2016 election, a finding that has been was known since late March when Barr released a summary of what he described as Mueller’s principle conclusions.