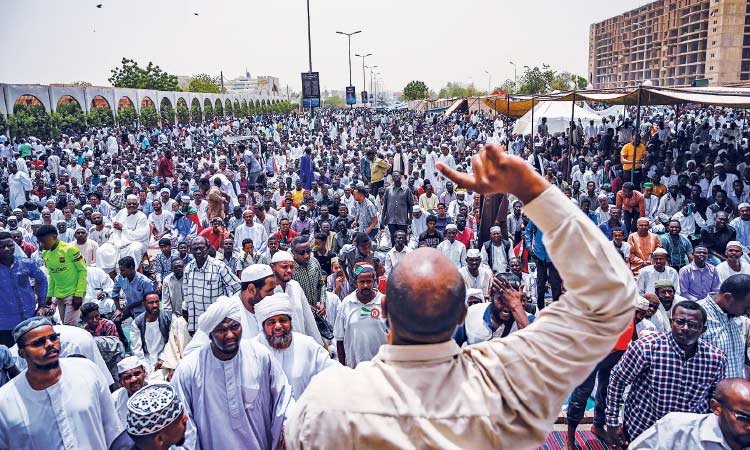 Sudanese protesters attend a prayer outside the army headquarters in the capital Khartoum on Friday. Agence France-Presse

Sudan’s opposition will present a list of mostly technocratic candidates for a civilian-led transitional council during its sit-in on Sunday, a top opposition leader told Reuters.

The leader, who declined to be named, said the proposed council would be mostly civilian with some military participation.

Sudan has been ruled by a military council since former President Omar Al Bashir was ousted amid mass protests on April 11. Protesters are pushing for a rapid handover to civilian leadership.

Sudanese protest leaders have announced plans to unveil a civilian body to take over from the ruling military council as demonstrators thronged Friday outside army headquarters.

The military council, which took power after ousting longtime leader Omar Al Bashir on April 11, has so far resisted calls from protesters to quickly make way for a civilian administration.

The Sudanese Professionals Association, which has been spearheading the protests, said in a statement that it would name members of the council at a news conference at 1700 GMT on Sunday outside the army complex, to which foreign diplomats are also invited. “We are demanding that this civilian council, which will have representatives of the army, replace the military council,” Ahmed al-Rabia, a leader of the umbrella group of unions for doctors, engineers and teachers, told AFP.

Friday marked four months to the day since the government tripled the price of bread, sparking the first protests which escalated into widespread rallies demanding Bashir’s departure.

Access roads were packed, with crowds flocking the huge square outside army headquarters to offer the weekly Muslim prayers.

“This government should be a representative of all the people and their aspirations,” said prominent cleric Sheikh Mater Younis as he addressed thousands of protesters.

“It should include all Sudanese people and shouldn’t exclude anyone.” Protester Yasser Dahab said all who had committed crimes against the Sudanese people be put on trial.

He said he wanted to see a civilian council with a prime minister and a government led by technocrats.

“This government can then prepare for free elections in two years with participation from all parties,” Dahab told AFP.

“The military should stay away from political life.” Calls for Bashir to face justice also came from the country’s war-torn Darfur.

“He is a criminal,” said Hawwa Yousef, who lives in a camp in the region after fleeing from her village in 2004 when it was attacked.

Bashir is wanted by the International Criminal Court over the conflict that the UN says killed 300,000 people, but the military has resisted sending the detained ex-leader to The Hague.

Activists on Thursday mobilised huge crowds through social media to keep up the pressure on the military council, now led by General Abdel Fattah al-Burhan, to cede power.

“I won’t leave until Burhan transfers power to a civilian government,” said Wali Aldeen, who has camped outside the complex since the day Bashir fell.

Following Bashir’s ouster, demonstrations targeted General Awad Ibn Ouf, the first head of the military council, seen by protestors as a tool of the old regime. Ibn Ouf stepped down in less than 24 hours and was replaced by Burhan, who so far has appeased protesters by lifting a night-time curfew and vowing to “uproot” Bashir’s circle.

The United States on Thursday praised orders by Sudan’s new military leader to free political prisoners and end the curfew.

It also dispatched Makila James, a deputy assistant secretary of state, on a mission to Khartoum this weekend.

The United States will “calibrate our policies based on our assessment of events”, State Department spokeswoman Morgan Ortagus said, but said talks on delisting Sudan as a state sponsor of terrorism remained suspended.

She welcomed the release of political prisoners but urged the military to “show restraint, avoid conflict and remain committed to the protection of the Sudanese people.” A senior US official, speaking on condition of anonymity, said Washington’s short-term goal was to “get the military folks out of centre-stage” and “back to being responsible for security, nothing else”.