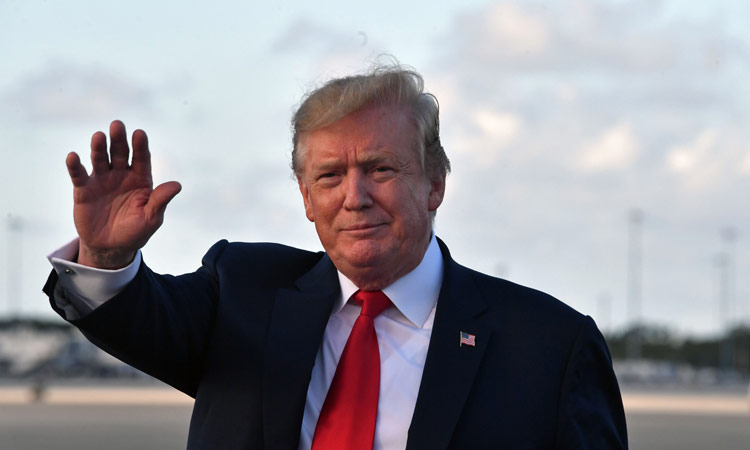 Fearing that his presidency was doomed, an angry Donald Trump pushed for Robert Mueller to be fired before he could deepen his probe into Russian election meddling, the special counsel’s long-awaited report said on Thursday.

The more than 400-page document, made public in redacted form by the Justice Department, detailed how Trump instructed his then White House counsel, Don McGahn, to tell the acting attorney general that Mueller “must be removed” — something McGahn refused to do.

The report — which landed as the United States dives into the ferment of a bitter presidential campaign — does support Trump’s repeated assertions that he never colluded with Russian intelligence efforts to tilt the 2016 election in his favor.

“As I have been saying all along, NO COLLUSION - NO OBSTRUCTION!” the president tweeted triumphantly, later declaring that any Russian interference had no impact on the outcome of the vote.

However, the report — based on nearly two years of interviews by Mueller’s team with Trump’s inner circle — emphasized that, contrary to the Republican president’s claim, he was not cleared of obstruction of justice.

And while finding that no Americans deliberately took part in the Russian meddling, Mueller also determined that Trump was happy enough to gain an advantage from the dirty tricks.

This included the release by WikiLeaks of emails stolen by Russian agents from the team of Trump’s Democratic opponent, Hillary Clinton.

“The campaign expected it would benefit electorally from information stolen and released through Russian efforts,” the report said.

Trump initially celebrated the publication of the report, saying at the White House that he was “having a good day.”

But later, he left for a long Easter weekend at his Florida golf resort in a more defensive mood, insisting that he had done nothing wrong in pushing for Mueller’s dismissal.

“I had the right to end the whole Witch Hunt if I wanted. I could have fired everyone, including Mueller, if I wanted. I chose not to,” Trump tweeted from Air Force One.

After arriving in Florida, he again took to Twitter, insisting: “Most importantly, the vote was not affected.”

Democratic congressional leaders Nancy Pelosi and Chuck Schumer called the report “a disturbing picture of a president who has been weaving a web of deceit, lies and improper behaviour and acting as if the law doesn’t apply to him.”

“It is imperative that the rest of the report and the underlying documents be made available to Congress and that Special Counsel Mueller testify before both chambers as soon as possible,” they said.

Jerry Nadler, chairman of the powerful House Judiciary Committee, has set a deadline of May 23 for Mueller to testify on his findings to Capitol Hill.

This is the end of my presidency

The secretive Mueller probe has consumed Washington — and the first half of Trump’s first term in office — over the last two years.

Throughout, Trump has blasted the probe as politically motivated, while his Democratic opponents have talked up the extraordinary idea that an American president might have been colluding with Russian agents.

The report paints an unflattering picture of Trump in crisis mode as the scandal first hit the White House in 2017.

US intelligence services had already been looking into the Russian meddling. But after Trump fired his FBI director, James Comey, Mueller was appointed as an independent prosecutor to handle the highly sensitive probe.

On hearing this, “the president slumped back in his chair and said: ‘Oh my God. This is terrible. This is the end of my presidency. I’m fucked,’ “the Mueller report stated.

Top Trump advisor Kellyanne Conway rejected that portrayal, telling reporters: “That was not the reaction of the president that day.”

Trump has been proven right regarding collusion, according to Mueller, but a second allegation — that he might have attempted to obstruct justice by derailing the probe — remains far from defused.

Attorney General Bill Barr made a nationally televised statement just before the report was released to give the administration’s spin on the results.

He explained Trump’s hostile behavior during the drama — such as the push to fire Mueller — as the actions of a president who was “frustrated and angered.”

“And at the same time, the president took no act that in fact deprived the special counsel of the documents and witnesses necessary to complete his investigation,” Barr said.

Mueller’s detailing of Trump’s actions however leaves a murkier record.

Trump’s attempts to have Mueller removed, according to the special counsel report, were part of a pattern.

“The president’s efforts to influence the investigation were mostly unsuccessful, but that is largely because the persons who surrounded the president declined to carry out orders or accede to his requests,” the report said.

In a passage likely to be welcomed by Trump’s Democratic opponents in Congress, Mueller stated that it could be up to lawmakers to determine whether Trump’s actions met the legal standards for obstruction of justice.

Legislators have “the authority to prohibit a president’s corrupt use of his authority,” the report said.

Publication of the report — minus parts blacked out for legal or security reasons — will allow everyone to get a more complete picture of a scandal that has been tangled in conspiracy theories.

But given the charged political atmosphere in Washington and the left-right chasm across the country as Trump dives into his 2020 re-election bid, the debate over what really happened is likely to rage on.

Trump is supremely confident that his opponents have failed in what he claims was high-level “treason” to destroy his presidency.

Claiming that Barr has been working to whitewash the Russia report, Democrats will push for more details and testimony in the near future.