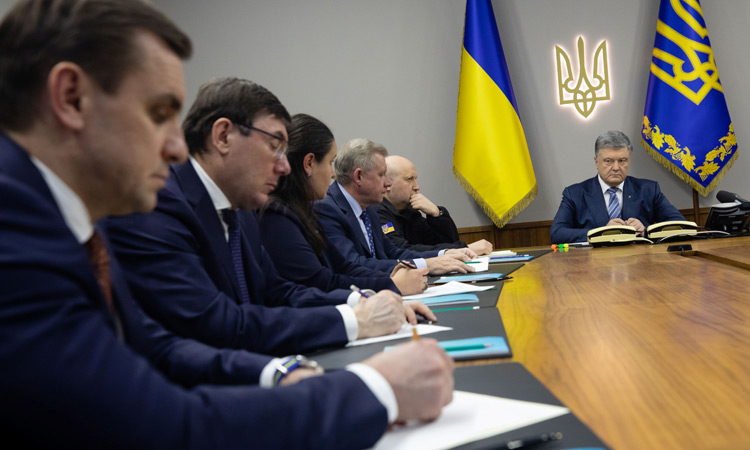 Viktor Medvedchuk, a prominent figure in Ukraine's Russia-leaning opposition, outlined the prospect in an interview before a presidential election runoff in Ukraine on Sunday which polls show political novice Volodymyr Zelenskiy should easily win.

He said the Kremlin was keen to know more about Zelenskiy, a 41-year-old Russian-speaking TV comedian who has no political experience, to understand if he is someone it could do a deal with, something it failed to do with incumbent Petro Poroshenko.

In a dramatic televised address, Poroshenko pleaded with voters to support him over Volodymyr Zelensky, a comedian with no political experience who has surged ahead in the polls.

"I once again ask you to forgive me. What did not work out hurts the most," Poroshenko said. 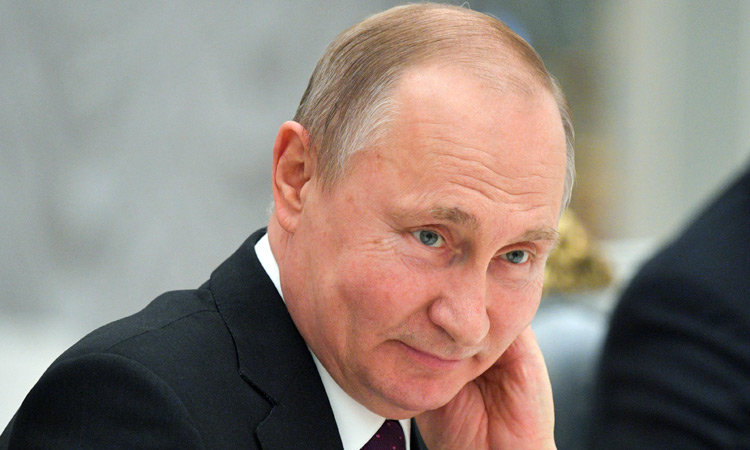 Russian President Vladimir attends a meeting with businessmen in the Kremlin.

The latest survey on Thursday showed him winning 73 per cent of the vote against only 27 percent for Poroshenko.

His rise has stunned Ukraine's political elite, who have struggled to revive the economy, root out corruption and put an end to a war with Moscow-backed separatists in the country's east.

Poroshenko, 53, has cast himself as the only Ukrainian politician who can take on Russia's Vladimir Putin and settle the war, which has claimed 13,000 lives.

He said Thursday that because of the conflict with Russia it would be "very risky to experiment with the post of the president and commander-in-chief".

Former prime minister Yulia Tymoshenko, who was knocked out in the first round of voting last month, said it was time to accept that Ukraine was facing a new political reality.

"Mathematics already tells us that Volodymyr Zelensky will win the second round," she said in a video address.

"I once again ask you to forgive me. What did not work out hurts the most.

A Ukrainian citizen, Medvedchuk does not represent Russia, but his words carry weight due to his close friendship with President Vladimir Putin and track record as a go-between between the two nations.

Medvedchuk said he had known Putin for 19 years, that the Russian leader is godfather to his daughter, and that he had held talks with Putin in Moscow as recently as two weeks ago.

The Kremlin has made clear it will be glad to see the back of Poroshenko but has not commented on Zelenskiy, saying only that it is watching candidates' statements closely and hopes any new president can implement a peace deal on Donbass, eastern Ukraine, which has been under separatist control since 2014.

The Kremlin did not immediately respond when asked if Medvedchuk was acting on its behalf or if the outlines of his proposal were in line with its own thinking.

Medvedchuk, who said he had only met Zelenskiy once "eight or nine years ago" and had no contacts with him, appears to be testing the waters however.

Medvedchuk was head of then-Ukrainian president Leonid Kuchma's administration until 2005. He has brokered prisoner exchanges between the two countries and held talks in Moscow last month with Prime Minister Dmitry Medvedev about gas prices.

At that meeting, he said he and an ally secured a pledge of a 25 percent discount for Russian gas if Kiev agreed to resume direct gas purchases from energy giant Gazprom instead of via European countries as it has done since the end of 2015.

Kateryna Rozhkova speaks next to Petr Krumphanzl during a press conference in Kiev on Thursday. Sergei Supinsky/ AFP

Customers look at artificial flowers on sale in Kiev, Ukraine on Thursday.

President Petro Poroshenko talks to his supporters ahead of the presidential elections, at the Olympic stadium in Kiev, Ukraine.

Ukraine's politician Viktor Medvedchuk poses for a picture during an interview with Reuters in Kiev, Ukraine on Wednesday. Andrew Osborn/ Reuters

Russia's main focus is returning separatist-held Donbass to Kiev on its own terms. This could help Moscow win some relief from sanctions imposed by the European Union over its 2014 annexation of Crimea and its backing for the pro-Russian Donbass uprising.

Poroshenko balked at what he saw as the unfavourable terms of the so far unimplemented Minsk peace deal agreed at a 2015 summit with Russia, France and Germany which called for Donbass to be given a special status and for an amnesty for separatist fighters among other things.

So far, Zelenskiy has said he wants peace in the east and to breathe new life into stalled talks, while saying he would not implement parts of the Minsk deal either.

For now, said Medvedchuk, Zelenskiy was on the wrong policy track. But he said there was hope he might alter his stance once elected after he'd had a chance to immerse himself in the subject.

"Maybe he'll come round to the idea that for the sake of peace you need to do this," said Medvedchuk. "Nobody is talking about having to make concessions or give something back. We're talking about the need to return people and territory."

Putin might be willing to release 24 captured Ukrainian sailors as a goodwill gesture, Medvedchuk said, adding that billions of dollars of Russian money would flow into Ukraine's economy if economic ties between the two neighbours, which have been disrupted by sanctions, were restored.

It was time to accept that Ukraine was facing a new political reality. Mathematics already tells us that Volodymyr Zelensky will win the second round.

"We're not saying that we have to kiss or hug each other again. We're talking about restoring pragmatic economic relations," he said, adding that Ukraine had lost $20 billion a year in exports to Russia because of Kiev turning its back on Moscow after Russia's actions in 2014.

Medvedchuk's pitch to patch up ties with Moscow is unpalatable for many Ukrainians who view Russia as a strategic enemy, particularly in the Ukrainian-speaking west of the country.

But it has support in the Russian-speaking south-east and is designed to appeal to those weary of a 5-year-old war estimated by the United Nations to have killed over 16,000 people. 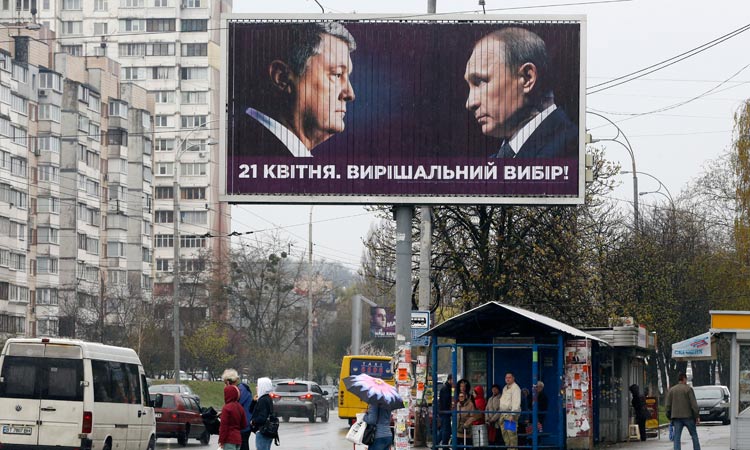 A billboard depicting Ukraine's President Petro Poroshenko and Russian President Vladimir Putin looking at each other in Kiev.

If pro-Russian separatists handed Donbass back to Ukrainian government control, some EU countries have suggested they would be ready to lift sanctions on Russia, though other countries only favour sanctions relief if Moscow returns Crimea as well.

An agreement on how to implement a peace deal over eastern Ukraine could be reached "within several months" and implemented on the ground within "six to eight months," said Medvedchuk, saying any talks on the matter should be between Kiev, Moscow and the two pro-Russian separatist breakaway territories.

"We could do it all within a few months. We need to sit down and talk. It (the detail in the Minsk accord) has already been spelt out. We just need to determine the order of doing things."

That would entail the Ukrainian parliament enacting several laws and approving a change to the constitution.

"They don't have any expectations in Moscow. They want to see what happens afterwards, who will be in his (Zelenskiy's) entourage, and what he will do and with whom.

Medvedchuk said he would advise Zelenskiy on the subject if asked and that his party, "Opposition Platform - For Life", which is second in the polls, -- would potentially be ready to cooperate with Zelenskiy in parliament after elections in October on a case-by-case basis.

Zelenskiy has indicated he would not want to form a coalition with Medvedchuk's party and has not said if he would be ready to work together on an ad hoc basis.

In the meantime, Moscow's standoff with Kiev is deepening. Russian Prime Minister Dmitry Medvedev said on Thursday he had signed a decree limiting Russian exports of some coal, crude oil and oil products to Ukraine in response to a recent Ukrainian embargo on some Russian goods.

"If we don't do it and continue with this anti-Russian policy and hysteria our economic life will deteriorate further."