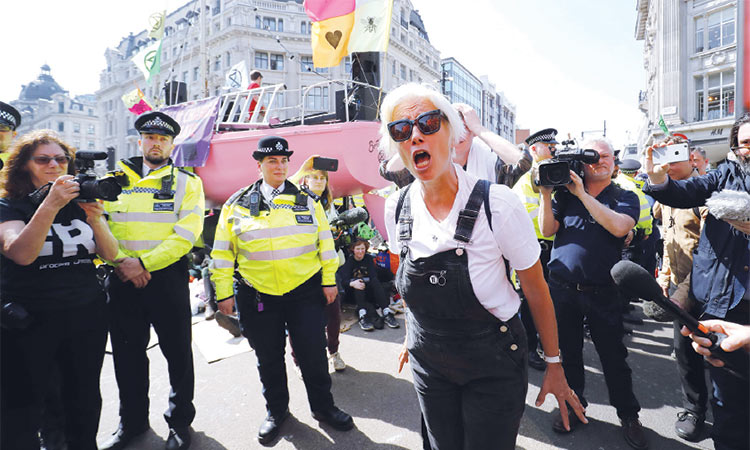 Emma Thompson gestures as police surround the pink boat being used as a stage by climate change activists in central London on Friday. Agence France-Presse

Organisers Extinction Rebellion have called for non-violent civil disobedience to force the British government to reduce net greenhouse gas emissions to zero by 2025 and stop what they call a global climate crisis.

The protests did not cause travel disruption on Friday during one of Britain’s main holiday weekends, but police said they have arrested more than 570 people so far this week.

Extinction Rebellion has blocked several locations in central London this week after staging a semi-nude protest in parliament earlier this month.

“Our planet is in serious trouble,” Thompson told reporters.

“We are here in this island of sanity and it makes me so happy to be able to join you all and to add my voice to the young people here who have inspired a whole new movement,” said Thompson, one of Britain’s most acclaimed actresses who has won two Academy awards.

She was one of several actors who read poems celebrating the beauty of nature from a pink boat lodged by the protesters at Oxford Circus in central London.

The protesters formed a human chain around the boat, which officials say has been locked to the ground, making it extremely difficult for police to remove.

Thompson’s appearance followed a demonstration near Heathrow Airport earlier, where a group of around a dozen teenagers, some as young as 13 and 14, held a banner alongside a busy road which read: “Are we the last generation?”

Some of the teenagers wept and hugged each other, although they were far outnumbered by police.

“I fear for my future” Oscar Idle, 17, told Reuters at Heathrow. “That fear gives me courage to act.”

“I want to live in a society which is not catastrophic, where there is not going to be food shortages, wild fires and hurricanes where people can live,” he said.

Greenpeace said it was protesting against company links to the oil and gas industry, which it calls a driving force in global warming. Activists also obstructed the entrance to the environment ministry near La Defense business district.

Police pepper-sprayed one group blocking the bank’s main entrance in a sit-down protest.

Some demonstrators taped themselves together while others cuffed themselves with plastic ties to metal poles to make it harder for police to dislodge them.

Employees in business suits milled around outside their offices. “I just want to get inside and on with my work,” one frustrated bank employee said.

Greenpeace and action group Les Amis de la Terre (Friends of the Earth) have previously criticised Societe Generale for its role in financing oil and gas projects, in particular the Rio Grande LNG gas project in the United States. A Societe Generale spokesman declined to comment.

A spokesman for EDF, which relies heavily on nuclear and hydropower plants to generate electricity, said 96 percent of its power was carbon dioxide-free. He said EDF was committed to curbing its total carbon footprint by 40 percent by 2030. A Total spokeswoman said two senior company executives had held talks with representatives of Greenpeace and Les Amis de la Terre.

“Many people are demonstrating in Paris and are asking for more action. We all know it is not so easy because the population’s primary request is for access to more energy, affordable energy and it has to be clean,” he said.

He added that Total was trying to address Climate change by improving the efficiency of its operations, growing its natural gas business and developing an electricity business based on low-carbon gas and renewables.