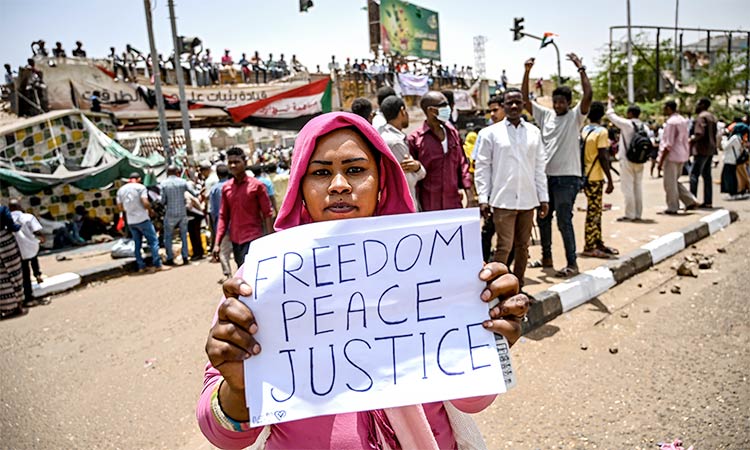 A Sudanese protester holds a placard during a protest outside the army complex in the capital Khartoum. Agence France-Presse

The official news agency SUNA is quoting the spokesman of the military council, Gen. Shams Eddin Kabashi, as saying on Thursday that Abdullah and Abbas Al-Bashir were arrested as part of the sweep against officials from the former government.

The Sudanese military ousted Omar Al-Bashir last week, after four months of street protests against his 30-year rule marred by conflict, civil war and corruption. Al-Bashir is also wanted for genocide and crimes against humanity by the International Criminal Court for atrocities committee in the western region of Darfur.

The military council, which took over after Al-Bashir’s ouster, said the former president was transferred on Tuesday to a prison in the capital, Khartoum.

Crowds are expected to converge Thursday in the Sudanese capital as protesters mark one week since the army ousted president Omar al-Bashir, determined to complete their revolution seeking civilian rule.

On April 11, the army removed Bashir as tens of thousands of protesters camped outside its headquarters in central Khartoum demanding support in toppling the veteran ruler.

“This is the first week in my life that I have lived without Bashir,” said Tariq Ahmed, 28, an engineer from Khartoum.

“I’m proud of what my generation has done to the dictator.”

Bashir, 75, took power in a coup in 1989, and headed a brutal regime for three decades.

His rule saw conflicts across the country, the south splitting away to become a separate nation, and regular arrests of opposition leaders, activists and journalists.

Protests initially began on December 19 in response to the tripling of bread prices, but swiftly turned into nationwide rallies against the autocrat.

Cities, towns and villages echoed with chants of “freedom, peace, justice,” and “just fall, that’s all”.

Bashir faces charges from the International Criminal Court of genocide, war crimes and crimes against humanity relating to the conflict in Darfur.

But despite detaining him, the military has resisted sending him to The Hague, saying his handover is a matter for a promised civilian government.

On Tuesday night, he was moved to the capital’s Kober prison, a family source told AFP.

Seven days on from Bashir’s ouster, the huge square outside army headquarters now reverberates with demonstrators demanding the dissolution of the military council that replaced him.

Thousands were in the square on Thursday, and they are expected to be joined by women’s groups, trade unionists, engineers and students at around 4:00 pm (1400 GMT).

“We are sending a message that we are not leaving this area until we achieve our goal,” said Ahmed, who has been at the protest since early Thursday morning.

“The idea is to keep the fire burning.”

Bashir’s defence minister General Awad Ibn Ouf initially took power as council chairman but he too was ousted within 24 hours following intense pressure from the street.

The council is now headed by General Abdel Fattah al-Burhan, a career soldier who is largely unknown outside of the army.  Protest leaders say they asked for a joint military-civilian council, but what they got was a full military council with many faces from the old regime.

They have now hardened their demands.

“We want the military council to be dissolved and replaced by a civilian council having representatives of the army,” said Mohamed Naji, a senior leader of the Sudanese Professionals Association, the group that launched the anti-Bashir campaign. This civilian council should then make way for a four-year transitional government, protest organisers say.

“It is increasingly clear that the revolution is still unfinished,” Alan Boswell, an analyst with International Crisis Group, told AFP.

“The security cabal which still has power in Sudan is clearly resisting demands that would force it to cede its own power.”

In addition to the departure of Bashir and his immediate successor Ibn Ouf, Salah Ghosh, the feared head of the National Intelligence and Security Service, has resigned.

He oversaw the crackdown on protesters that left more than 60 people dead, hundreds wounded and thousands jailed.