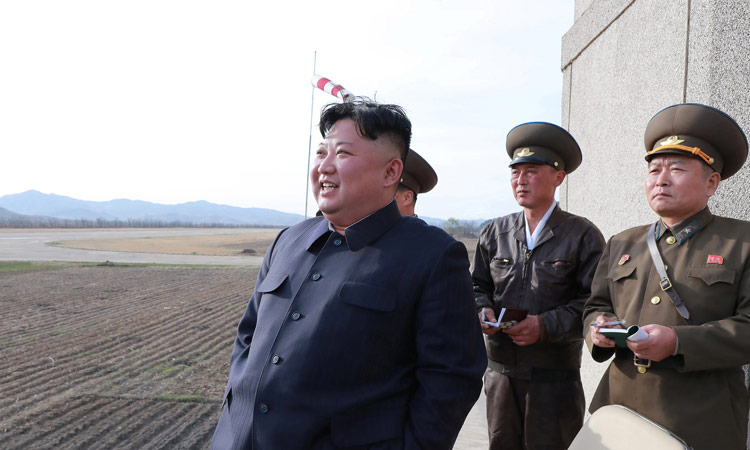 The Korean Central News Agency (KCNA) did not describe exactly what weapon was tested on Wednesday, including whether it was a missile or another type of weapon. “Tactical” implies a short-range weapon rather than the long-range ballistic missiles that have been seen as a threat to the United States.

The weapon has a “peculiar mode of guiding flight” and “a powerful warhead,” KCNA said.

Kim said “the completion of the development of the weapon system serves as an event of very weighty significance in increasing the combat power” of the North Korean army, according to KCNA.

A second summit between Kim and US President Donald Trump in Hanoi in February failed to make any progress towards denuclearisation of the Korean peninsula. Sanctions against the North over its nuclear and missiles programmes remain in place.

Kim Dong-yub, a military expert at Kyungnam University’s Institute of Far Eastern Studies in Seoul, said the description that the test was “conducted in various modes of firing at different targets” likely meant that it could be launched from the ground, sea and air.

Kim Jong Un also oversaw the test of an unidentified tactical weapon in November that could protect North Korea like a “steel wall,” according to state media. It was not clear whether it was the same weapon tested this week.

Experts said in November it was part of Kim’s initiative to shift the mainstay of the North’s conventional military power from a nearly 1.3 million-strong army to high-tech weapons.

“This does serve as a useful reminder of one critical fact: Chairman Kim Jong Un never promised to stop testing all weapons in his military arsenal, just nuclear weapons and ICBMs that have the potential to hit the US homeland,” said Harry Kazianis of the Washington-based Center for the National Interest.

A US official said that, according initial information, US Northern Command and Strategic Command did not detect a missile launch from North Korea. Further checks were underway, said the official, who spoke on condition of anonymity.

A White House official said: “We are aware of the report and have no further comment.”

Spokesman Army Lieutenant Colonel Dave Eastburn said the Pentagon was also aware of the report. There was no immediate response to a request for comment from the US State Department.

Kim Jong Un’s visit to the tactical weapon testing site came after he visited the North Korean Air and Anti-aircraft Force on Tuesday, according to KCNA, where he inspected a flight drill and expressed “great satisfaction” at their combat readiness.

Kyungnam University’s Kim Dong-yub said the latest test appeared to be a message to the United States that North Korea would not bow to sanctions and go its own way.

“That’s part of it, but it’s also an internal message to the North Korean people and to the military” to instil trust in their own security by reinforcing conventional weapons, Kim Dong-yub said.

Satellite images from last week showed movement at Yongbyon, North Korea’s main nuclear site, that could be associated with the reprocessing of radioactive material into bomb fuel, the Center for Strategic and International Studies in the United States said on Tuesday.

US national security adviser John Bolton said in a Bloomberg News interview on Wednesday the United States needed to see “a real indication from North Korea that they’ve made the strategic decision to give up nuclear weapons” before a third summit between Trump and Kim Jong Un.