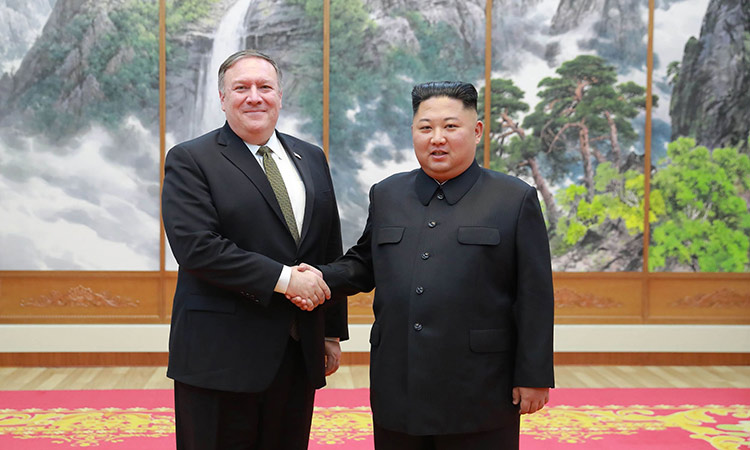 The test, which didn't appear to be of a banned mid- or long-range ballistic missile that could scuttle negotiations, allows Pyongyang to show its people it is pushing ahead with weapons development while also reassuring domestic military officials worried that diplomacy with Washington signals weakness.

Separately, Pyongyang's Foreign Ministry accused Pompeo of playing down the significance of comments by North Korean leader Kim Jong Un, who said last week that Washington has until the end of the year to offer mutually acceptable terms for an agreement to salvage the high-stakes nuclear diplomacy.

Both the demand for Pompeo's removal from the talks and the weapon test point to Pyongyang's displeasure with the deadlocked negotiations.

In a statement issued under the name of Kwon Jong Gun, director general of the American Affairs Department at Pyongyang's Foreign Ministry, North Korea accused Pompeo of "talking nonsense" and misrepresenting Kim's comments.

During a speech at Texas A&M on Monday, Pompeo said Kim promised to denuclearise during his first summit with President Donald Trump and that US officials were working with the North Koreans to "chart a path forward so we can get there."

"He (Kim) said he wanted it done by the end of the year," Pompeo said. "I'd love to see that done sooner." The North Korean statement said Pompeo was "misrepresenting the meaning of our requirement" for the negotiations to be finalized by the year's end, and referred to his "talented skill of fabricating stories."

It said Pompeo's continued participation in the negotiations would ensure that the talks become "entangled" and called for a different counterpart who is "more careful and mature in communicating with us."

In a speech at his rubber-stamp parliament last week, Kim said he is open to a third summit with Trump, but only if the United States changes its stance on sanctions enforcement and pressure by the end of the year.

Kim observed the unspecified weapon being fired Wednesday by the Academy of Defense Science, the North's state-run Korean Central News Agency said. Kim was reported to have said "the development of the weapon system serves as an event of very weighty significance in increasing the combat power of the People's Army."

Meanwhile, the US State Department said on Thursday that it remained ready to negotiate with North Korea after the regime called for Pompeo to be excluded from future nuclear talks.

The spokesman said the United States was aware of the North Korean foreign ministry's demand regarding Pompeo but did not comment directly on it.