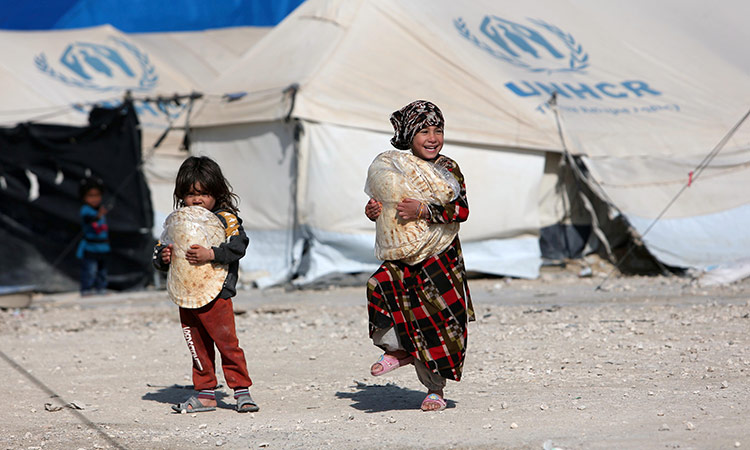 “There is a prime responsibility of states vis-a-vis their own nationals,” Panos Moumtzis, the UN regional coordinator for Syria, told reporters in Geneva.

According to the UN children’s agency UNICEF, around 3,000 foreign children from 43 countries are housed at the Al-Hol camp in northeastern Syria alone, which has taken in most of the people fleeing Daesh’s self-proclaimed “caliphate”.

The Kurdish-run camp has seen its population explode from around 10,000 people last December to more than 75,000 people now, Moumtzis said.

According to other estimates, the camp could hold up to 100,000 people, more than 90 per cent of whom are women and children.

The huge influx followed the assault by US-backed forces against the last Daesh holdout, which collapsed last month.

Conditions at the camp and along the route have been dire.

According to the UN, 260 people have died while making the journey or upon arrival at the camp since December, including 211 children under the age of five.

Foreign women and children with ties to Daesh foreign fighters are being held in a separate area of the camp.

Several governments have been grappling with the problem of what to do with captured Daesh fighters from their country, the women who married them and their children.

“All member states have to do all measures possible to make sure the protection, the prosecution, the repatriation the rehabilitation and the reintegration of these women and children in compliance with their obligations under international law,” Moumtzis said.

He insisted that countries should provide children of their nationals citizenship, and all the rights that go along with it.

“The right to nationality is really very important under the Universal Declaration of Human Rights,” he said, stressing that “really nobody should be rendered stateless.”

“These children do have a father and a mother, (who) have a nationality, and therefore a solution has to be found,” he said.

He hailed that international donors last month in Brussels pledged nearly $7 billion in aid for 2019 for civilians caught up in Syria’s bloody civil war.

But he warned that not much of the cash had materialised yet, and urged countries not to wait to honour their contribution.

“The money in the bank is very low at the moment,” he said.

An Iraqi court said on Thursday it had released a French national who spent two months in detention after being transferred from war-ravaged Syria as it found no proof he fought there.

Instead, the Baghdad court said, their interrogations had found the unnamed Frenchman travelled to Syria “in support of the Yazidi cause.”

In February, the US-led coalition fighting the Daesh group handed to Iraqi authorities 13 French nationals caught in Daesh’s dwindling “caliphate” in east Syria. All 13 were thought to be members of Daesh’s feared contingent of foreign fighters, and Iraqi President Barham Saleh pledged they would be tried “according to Iraqi law”.

But as Iraqi prosecutors began investigating, “terrorism” cases were only prepared against 12 nationals.

On Thursday, the Karkh Special Investigations Court for Terrorism Issues in Baghdad announced it “let go one of the 13 accused French nationals due to a lack of evidence”.

After months of investigations, the court said, “there was no proof of his involvement in any military activities, and his entry (to Syria) was in support of the Yazidi cause”.

During Daesh’s rampage across northern Iraq in 2014, it slaughtered thousands of members of the Yazidi community and seized its women and girls as sex slaves.

The atrocities prompted the US-led coalition to begin a military intervention against Daesh in Iraq, which it then expanded into Syria by backing a Kurdish-led fighting force.