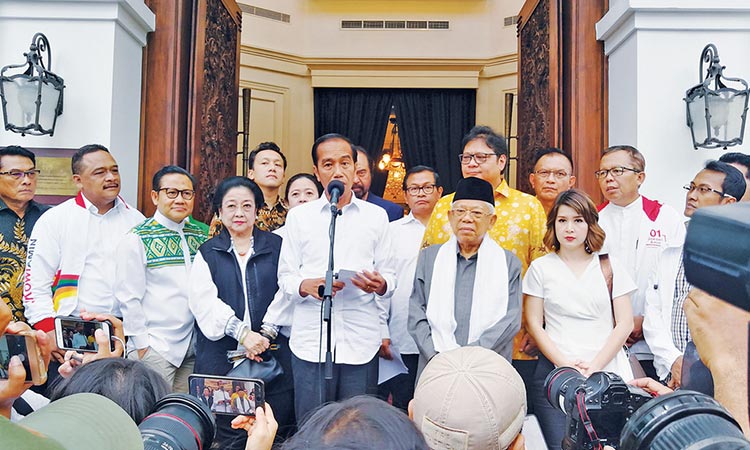 Joko Widodo talks to media during a press briefing in Jakarta, Indonesia, on Thursday. Reuters

National Police Chief Tito Karnavian said Wednesday’s “smooth and safe” polls would not be disrupted by demonstrations, and warned of arrests.

“If there are any illegal or unconstitutional actions that threaten public stability and security, (authorities) will take firm action,” he said.

“We won’t tolerate it.

“I urge everyone against mass demonstrations, whether it’s to celebrate or to express dissatisfaction” at the results, Karnavian added.

This year’s campaign was punctuated by bitter mudslinging and a slew of fake news online — much of it directed at the presidential contenders.

Authorities said Thursday they had seen a spike in false reports and hoaxes, with some calling for chaos in the streets and for Indonesians to commit violence in response to the results.

However, the capital Jakarta was quiet Thursday after as many as 190 million voters in the Muslim-majority country cast ballots in the one-day poll — which featured a record 245,000 candidates — to elect a new president, parliamentarians and local legislators.

While official results are not due until next month, a series of so-called “quick counts” by pollsters, which are based on samples, showed Widodo as much as 11 percentage points ahead.

Quick counts have been reliable indicators in past elections, but Widodo held off declaring victory — while his rival Prabowo Subianto insisted he was the archipelago’s next leader.

Widodo said on Thursday that he had received phone calls from several world leaders to congratulate him on his country’s election, but added that he would await the final results before declaring victory.

“We still have to wait for the numbers from the KPU (General Elections Commission),” he told a crush of reporters.

“Let’s continue to work and maintain our unity and harmony as a nation,” he added.

However, Subianto reiterated that he and running mate Sandiaga Uno, a wealthy financier, had won, citing voter fraud but without supplying concrete evidence. “Sandiaga Uno and I are declaring victory as the president and vice president,” he told cheering supporters in Jakarta, ending his speech with shouts of “Allahu Akbar” (God is Greatest)” and “Merdeka” (freedom).

The retired general — who had close ties to the Suharto dictatorship, which collapsed in 1998 — earlier warned he would challenge the results in court if he lost, and stage street protests.

Some supporters of Subianto called for a march near Jakarta’s biggest mosque after prayers on Friday, Islam’s holy day.

The 67-year-old, who has long had his eye on the country’s top job, lost to Widodo in 2014 and then mounted an unsuccessful legal challenge to that election.

Online, the retired military man was pilloried by social media users who poked fun at his repudiation of the unofficial results and for kissing the ground as he declared himself president.

“We honestly feel sorry for Prabowo, not because he’s lost the election (again) but because he is surrounded by people who made him a zombie who can’t differentiate between reality and illusion,” said one Twitter user with 165,000 followers. National newspapers called for reconciliation, with top-selling Kompas saying “Let’s Unite”, while Tempo declared it “One More Time” for Widodo.

Financial markets cheered, with the Jakarta composite stock index and the Indonesian rupiah both higher.

Widodo told reporters he had received congratulatory calls from 22 state leaders, including Malaysian Prime Minister Mahathir Mohamad and Turkish President Recep Tayyip Erdogan, and he had invited his rival to meet.

Widodo also urged supporters to wait for official results to confirm the win.

At a separate news conference just minutes after Widodo declared victory, Prabowo appeared defiant and said his team had evidence of cheating and claimed to have won 62 per cent of the popular vote based on internal polling.

“We have declared (victory) because we got evidence of widespread cheating at the village, sub-district and district levels across Indonesia,” he said, standing next to his running mate, Sandiaga Uno, who looked more subdued. 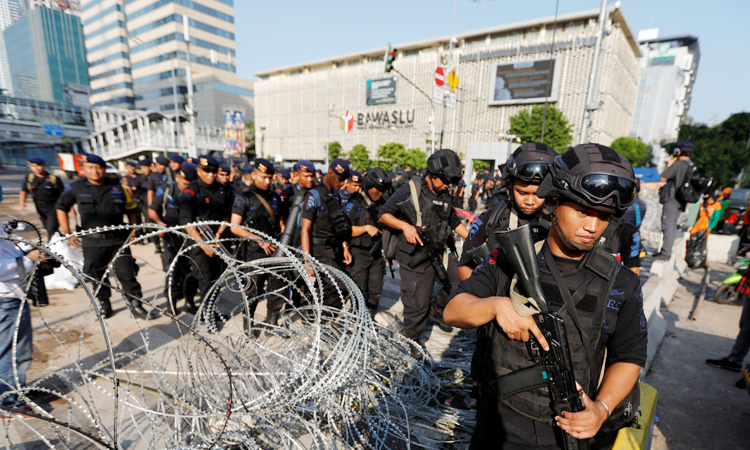