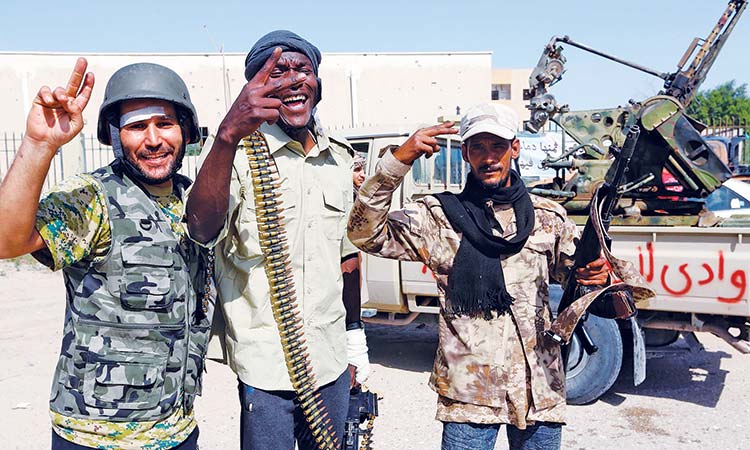 Forces loyal to GNA gesture after taking control of the area of Al Aziziyah, located some 40 km south of Tripoli. Agence France-Presse

Interior minister Fathi Bach Agha ordered the “suspension of all relations between the ministry and the French side... due to the position of the French government in support of the criminal Haftar”, it said in a statement.

Mortars crashed down on a suburb of Tripoli on Thursday, almost hitting a clinic and adding to people’s suffering after two weeks of an offensive by eastern troops on the Libyan capital, which is held by an internationally recognized government.

The shelling came a day after seven people were killed when Grad rockets hit a densely populated district of Tripoli, which the eastern Libyan forces of commander Khalifa Haftar have been trying to take, deepening the chaos that has plagued the oil-producing nation since 2011.

The Libyan National Army (LNA) of Benghazi-based Haftar has become bogged down in the southern suburbs of the capital.

In al-Suani, a southwestern suburb, Reuters reporters saw two mortars almost hitting a clinic. The fighting has killed 205 people, including 18 civilians, and wounded 913 since the start of the campaign, the World Health Organization (WHO) said on Thursday.

Locals blamed Haftar’s forces for the shelling, saying the rockets had been fired from the direction of his positions south of the capital.

“We say to the United Nations and the Security Council: listen. Listen to the bombing... Rockets are coming down on us. For this reason, please find a solution for us,” said Youssef Salem, a displaced man from al-Suani. The LNA has denied shelling residential areas.

The Tripoli government issued arrest warrants for Haftar and other top eastern officials, blaming them for Wednesday’s shelling.

Eastern officials have already issued arrest warrants for Tripoli premier Fayez al-Serraj and other western officials as there is no sign of a political solution or even of a ceasefire. Foreign powers are worried but unable to present a united front over the latest flare-up in the cycle of anarchy and warfare that has gripped Libya since dictator Muammer Qadhafi was toppled in 2011.

The internationally recognised interior ministry accused France of supporting Haftar and said it would halt security cooperation with Paris. 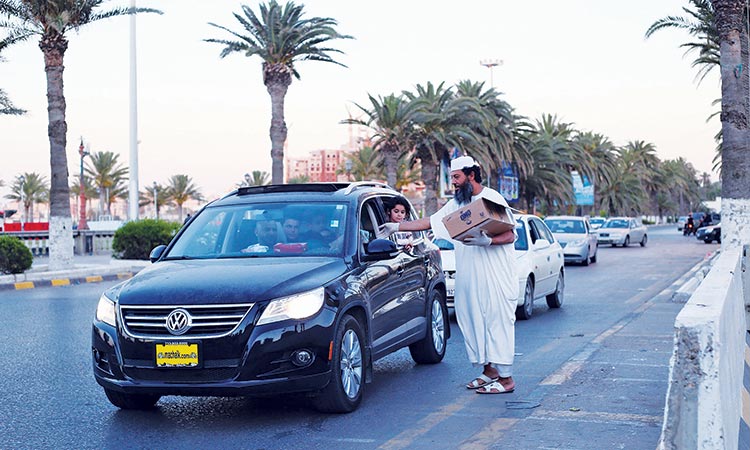 Libyan strongman Khalifa Haftar, who has launched a military offensive against the UN-recognised government in Tripoli, held surprise talks with Italian Prime Minister Giuseppe Conte in Rome on Thursday ahead of a visit to Paris next week, officials said.