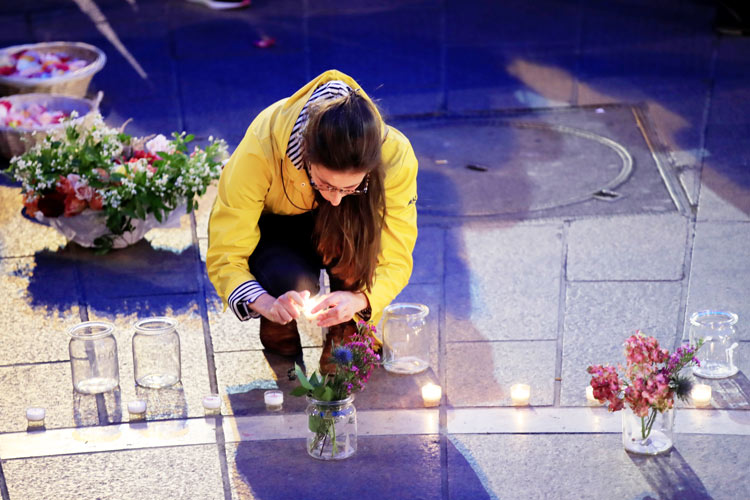 A woman lights a candle at the Place Saint-Michel the day after the Notre-Dame Cathedral fire in Paris. Reuters

Risking their own lives as they toiled through the night, firefighters formed a human chain to rescue a swathe of Notre-Dame's "priceless treasures."

They also brought out many relics by going inside even as the inferno spread quickly on the medieval roof beams -- not least the Holy Crown of Thorns and a sacred tunic worn by 13th century French king Louis IX.

Junior interior minister Laurent Nunez told reporters at the scene that work to secure the structure would continue into Thursday, allowing firefighters access to remove remaining artifacts and artworks.

He said the building had been saved within a critical time window of 15-30 minutes by a team of 400 firefighters who worked flat out throughout the night.

Though "some weaknesses" in the 850-year-old structure had been identified, overall it is "holding up OK", he added.

Their lack of self regard as they to retrieved countless other items prompted President Emmanuel Macron to praise their "extreme courage."

"We started to panic when we smelt scorching," even before the flames emerged, said Philippe Marsset, vicar general of Notre-Dame who watched aghast with horrified Parisians and tourists as the drama unfolded.

Within an hour, Paris mayor Anne Hidalgo told AFP that "General Jean-Claude Gallet (the commander of the Paris fire brigade)is explaining to us that it will be very difficult to save the (wooden) roofing but that the priority will be to save the relics."

The firefighters then moved in, seeking out as many of the building's treasures as they could, forming a human chain to bring them to safety.

Fire brigade Lieutenant-Colonel Gabriel Plus said "everything was against" the first firefighters on the scene.

"Time and the wind were against us and we had to get on top of it fast. We had to make a rapid choice... and the priority we gave ourselves was to save the two bell towers, and both were saved," he added.

"From the beginning, there was always the possibility that the whole structure might collapse."

While armchair critics have suggested more could have been done to slow the fire, tough choices had to be made, said Plus, adding they could not have hoped to save the roof by that stage.

"Heritage curators had a prevention plan which indicated what was most important in each room of the building," said sources close to Hidalgo, who afterwards heaped praise on all involved.