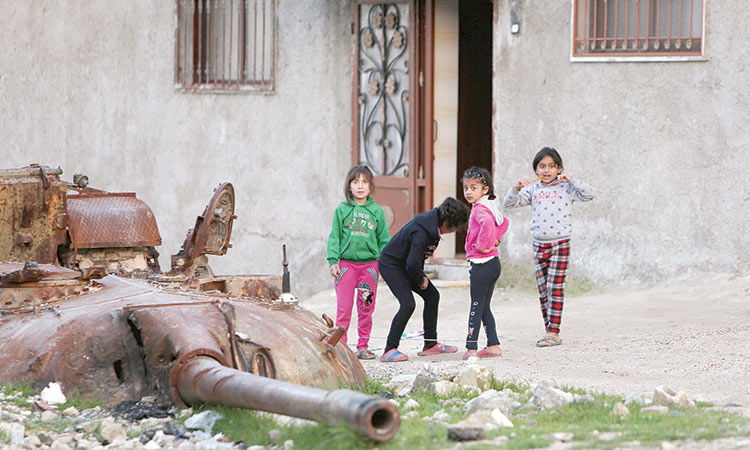 Girls play near a damaged tank along a street in Kobani, Syria. File / Reuters

Kazakhstan said on Tuesday that it will host fresh talks on Syria on April 25-26, backed by Iran, Russia and Turkey as they eye an end to the eight-year conflict.

Delegations from the Syrian regime and armed opposition groups are expected to participate along with representatives of the three guarantor states, Kazakhstan’s foreign ministry said in a statement.

The United Nations and Jordan would attend as observers, it added.

The situation on the ground in Idlib will be on the agenda of the talks, as well as “confidence-building measures” and the distribution of humanitarian aid.

The talks will be the first in Astana for the UN’s new Syria envoy Geir Pedersen, who took over from Staffan de Mistura in January.

De Mistura seemed frustrated at the most recent Astana talks in November, ruing a “missed opportunity” to move closer towards a political settlement.

Pedersen said that talks in Damascus on Sunday with Syrian Foreign Minister Walid Muallem focused on a political settlement had been “substantial.” Russia, a key backer of Syrian President Bashar al-Assad, has taken a lead role in diplomatic efforts through the so-called “Astana process” with Iran and Turkey that has largely sidelined UN diplomacy.

The talks there began in January 2017.

Last month the Kazakh capital changed its name from Astana to Nur-Sultan, although the former name is still being used for the talks.

Syria’s war has killed more than 370,000 people and displaced millions since the conflict began with the repression of anti-government protests in 2011.

The Syrian regime has made a military comeback with Russian military support since 2015, and now holds almost two-thirds of the country.

Meanwhile, Iran’s Foreign Minister Mohammad Javad Zarif visited Damascus on Tuesday ahead of a fresh round of talks next week in Kazakhstan towards ending Syria’s eight-year civil war.

Iran and Russia are key allies of the Damascus regime, and along with rebel backer Turkey have sponsored the so-called Astana negotiations track to end the conflict.

In Damascus, Zarif and President Bashar al-Assad discussed “the next round of Astana talks and the importance of lasting communication between Damascus and Tehran for continued cooperation”, the presidency said in a statement.

Both countries are facing a flurry of sanctions by Western nations including the United States, with Washington this month designating Iran’s elite Islamic Revolutionary Guard Corps a terrorist organisation.

Syria is in the grips of a growing fuel crisis that it blames on these sanctions.

Zarif and Assad accused Western countries headed by the United States of “launching wars and economic terrorism against anyone who did not agree with them” in regional matters, the presidency said.

After the meeting, Zarif told journalists Iran, Russia and Turkey would be focusing on the jihadist-held bastion of Idlib in northwestern Syria, pro-government newspaper Al Watan said.

The region on the border with Turkey is held by Syria’s former Al-Qaeda affiliate, Hayat Tahrir al-Sham, and is in theory protected from a massive regime offensive by a Russia-Turkey deal.

The September accord aimed to set up a buffer zone around Idlib, but was never fully implemented as militants refused to withdraw from it.

“The Astana guarantors... need to abide by the commitments linked to the Idlib file,” including “disarming terrorists groups and them leaving Idlib”, Zarif said, according to Al Watan.

Regime forces have continued to bombard Idlib despite the deal, increasingly so in recent weeks.

Zarif is expected to visit Turkey after Damascus.

Endless rounds of UN-backed Syria peace talks have failed to stem the bloodshed, and Iran, Russia and Turkey have sponsored the parallel Astana negotiations track since early 2017.

In the aftermath of Daesh ouster a community of Syrians who converted to Christianity from Islam is growing in Kobani, a town besieged by the militant group for months, and where the tide turned against the militants four years ago.