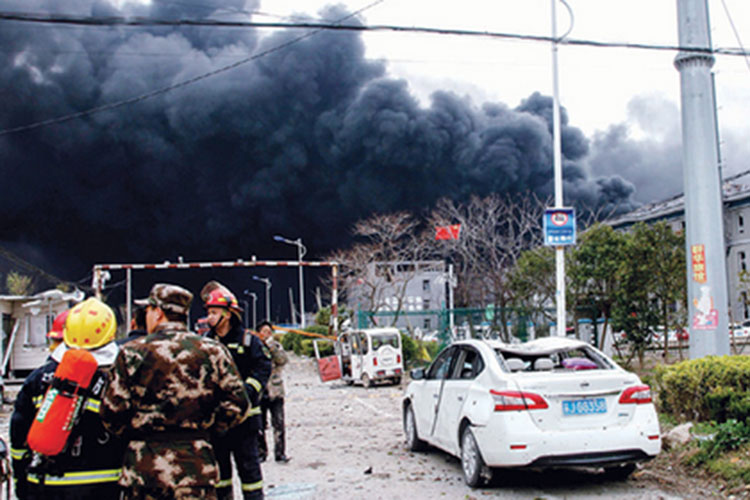 Fire and smoke rise at an explosion site in Yancheng in China's eastern Jiangsu province. File/AFP

The explosion in Jiangsu province's Yancheng city last month was one of the worst industrial accidents in the country in recent years and led to the closure of the plant.

Six employees from the Jiangsu Tianjiayi Chemical company, whose plant was involved in the blast, have "major responsibilities" in relation to the incident, the Yancheng government said Saturday in a brief statement on its official Twitter-like Weibo account.

It said that "criminal coercive measures" have been taken against them -- a vague term which indicates detention, arrest or being put under temporary house arrest until police complete investigations, according to an explanation on the Chinese parliament's website.

Three others had also earlier been detained in connection with the blast.

The statement added that measures will also be taken against Jiangsu Tianjiayi Chemical, as well as its controlling shareholder, the Jiangsu Nijiaxiang Group.

The March 21 explosion razed an industrial park and blew out the windows of surrounding homes.

The company, with 195 employees, was established in 2007 and mainly produces raw chemical materials including anisole, a highly flammable compound.

It has a history of violating environmental regulations, according to online records from Yancheng city's environment and ecology bureau.

In 2015 and 2017, the firm was fined for breaking rules on solid and water waste management.

In November, a gas leak at a plant in the northern Chinese city of Zhangjiakou -- which will host the 2022 Winter Olympics -- killed 24 people and injured 21 others.

In 2015, China saw one of its worst industrial accidents when giant chemical blasts in the northern port city of Tianjin killed at least 165 people.