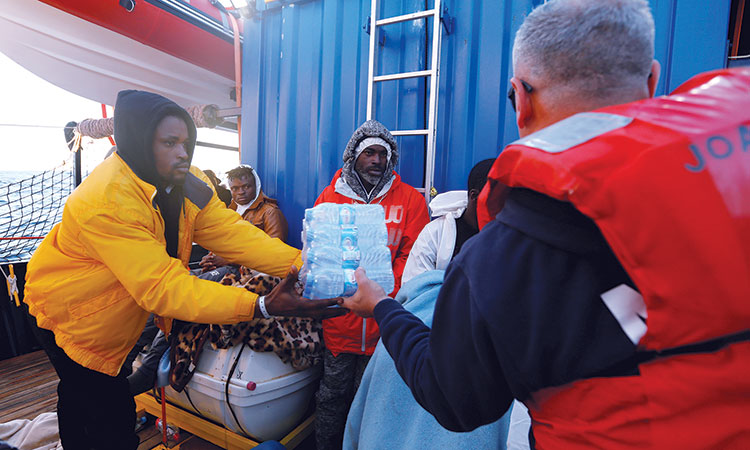 Dozens of migrants stuck on a ship since their rescue in the Mediterranean 10 days ago, arrived in Malta after four European countries agreed to take them in.

And as Italy’s hardline interior minister expressed satisfaction at having kept the country’s borders closed to the migrants, Malta expressed frustration at being confronted with the problem again.

All 62 migrants still on the German-flagged ship Alan Kurdi boarded Maltese naval vessels, which brought them to Valletta, where they were to join two women evacuated last week for medical reasons.

The migrants are to be “redistributed between #Germany, #France, #Portugal and #Luxembourg,” Maltese Prime Minister Joseph Muscat announced on Twitter.

“None will remain in Malta which cannot shoulder this burden alone,” he added.

On Friday, French Interior Minister Christophe Castaner said Paris and other EU partners would “show solidarity” towards the migrants, who include 12 women and two children aged one and six.

The group was rescued on April 3 from a barely seaworthy vessel off Libya, and brought to the Italian island of Lampedusa.

Sea-Eye chairman Gorden Isler denounced the time it had taken to find a compromise. “It is simply not explainable why it was necessary for people to stay on board during the long negotiations while governments negotiated 64 individual fates,” he said.

But Italy’s hardline Interior Minister Matteo Salvini refused them entry. Berlin should take the migrants as they had been rescued by a German NGO, Sea Eye, he said.

“It’s their problem, they must deal with it,” Salvini said, adding he had personally written to the ship’s captain to warn him the vessel must not enter Italian territorial waters.

On Saturday, Salvini, of the far-right League party, expressed satisfaction at the outcome.

“As promised, no immigrant from this German NGO (ship) will arrive in Italy. They will go to Germany or elsewhere,” he tweeted.

“The Maltese are right to denounce the danger of the NGO’s -- we stand beside them in the fight against human traffickers,” added Salvini, who last month insisted Italian ports would be closed to migrant rescue NGOs operating in the Mediterranean to force other EU states to take them in.