Pompeo in Peru to maintain regional pressure on Venezuela's Maduro 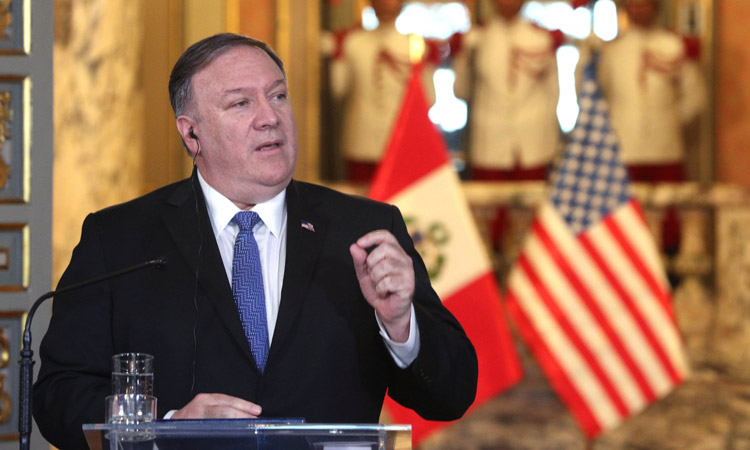 US Secretary of State Mike Pompeo, speaks during a press conference at government palace in Lima, Peru, on Saturday.

US Secretary of State Mike Pompeo landed in Peru on Saturday on the third-leg of a four-nation tour of Latin American allies focusing heavily on Venezuela and countering China's economic reach.

He paid tribute to Peru's welcome for hundreds of thousands of Venezuelan refugees and Vizcarra's fight against corruption, which has embroiled the previous four Peruvian presidents.

But he became irritated when a reporter asked if that contradicted US President Donald Trump's harsh immigration policy at home.

"Our objective is to allow people to stay in their home countries, this is President Trump's desire, we want to create conditions in these countries where they can stay in their own country," he told the press conference with Popolizio.

Earlier Pompeo became the first US secretary of state to visit Paraguay, formerly ruled as a dictatorship, since 1965, paying tribute to the country's transition to democracy as an inspiration to the region.

The top US diplomat arrived in Asuncion late Friday after talks with Chile's President Sebastian Pinera in Santiago that focused heavily on his country's developing trade relationship with China.

The highlight of Pompeo's trip will be a brief visit Sunday to the Colombian city of Cucuta on the Venezuelan border, where he will meet refugees.

All four countries on his itinerary are led by right-wing or center-right leaders favorable to Washington's uncompromising approach to Venezuelan President Nicolas Maduro.

In Asuncion, Pompeo had praised Paraguay's support for US-backed opposition leader Juan Guaido in Venezuela, and its role in the Lima Group of mostly Latin American nations seeking a solution to the Venezuela crisis.

"Paraguay is a leader in defending democracy and calling Maduro as he is, a tyrant who has ruined his country," Pompeo said.

"We have always said: with dictators, with tyrants, there is no dialogue. You fight them. We must fight them until liberties are restored so that the Venezuelan people can return to live with dignity," he told reporters.

Asked by a US journalist if Paraguay would back a military intervention in Venezuela, he said: "We are convinced that all the diplomatic efforts that are being made to isolate this regime will have results in a short time."

Paraguay was ruled by dictator Alfredo Stroessner from 1954 to 1989.