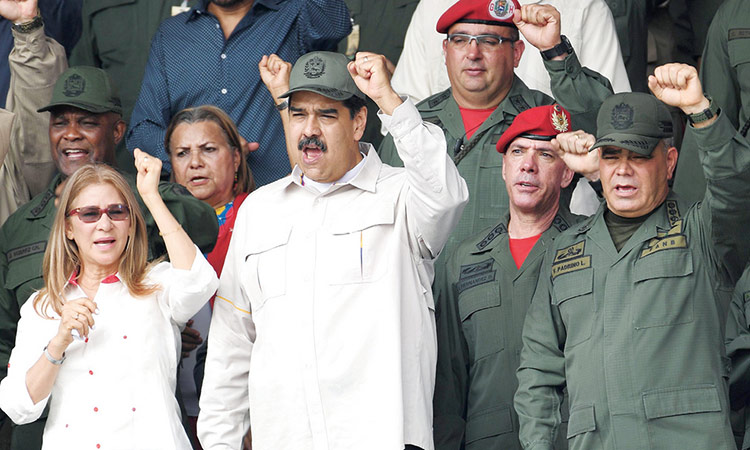 Nicolas Maduro (second left) and his wife Cilia Flores gesture during a military parade at a military complex in Caracas on Saturday. Agence France-Presse

Guaido, the leader of the opposition-controlled National Assembly who in January invoked Venezuela’s constitution to assume an interim presidency, has called on the military to abandon Maduro amid a hyperinflationary economic collapse made worse by several nationwide blackouts in the past month.

Guaido has been recognised as Venezuela’s rightful leader by the United States and most Western countries, who agree with his argument that Maduro’s 2018 re-election was illegitimate.

The civilian militia, created in 2008 by the late former president and Maduro mentor Hugo Chavez, reports directly to the presidency and is intended to complement the armed forces.

Maduro, who calls Guaido a US puppet, said he aimed to raise the number of militia members to three million by year-end from what he said was more than 2 million currently.

Maduro has encouraged them to become involved in agricultural production.

Shortages of food and medicine have prompted more than three million Venezuelans to emigrate in recent years.

“With your rifles on your shoulders, be ready to defend the fatherland and dig the furrow to plant the seeds to produce food for the community, for the people,” Maduro, a socialist, told thousands of militia members gathered in the capital Caracas, wearing khaki camouflaged uniforms.

So far, the military top brass has remained loyal to Maduro despite Guaido’s offer of amnesty to military members who switch sides. Hundreds of soldiers have sought asylum in neighboring Colombia.

While electricity has largely been restored in Caracas, Maduro’s administration is rationing power to the rest of Venezuela.

Guaido is travelling in the interior to drum up support.

In Zulia state, the site of the OPEC member’s first oil well and home to Venezuela’s second-largest city, Maracaibo, he said: “We are here to check on the situation, your suffering. But Zulia will rise up.”  Separately on Saturday, two employees of Venezuela’s central bank who were arrested after meeting with Guaido earlier this week were freed, rights group Penal Forum said.

US Secretary of State Mike Pompeo landed in Peru on Saturday on the third-leg of a four-nation tour of Latin American allies focusing heavily on Venezuela and countering China’s economic reach.

He paid tribute to Peru’s welcome for hundreds of thousands of Venezuelan refugees and Vizcarra’s fight against corruption, which has embroiled the previous four Peruvian presidents.

But he became irritated when a reporter asked if that contradicted US President Donald Trump’s harsh immigration policy at home.

“Our objective is to allow people to stay in their home countries, this is President Trump’s desire, we want to create conditions in these countries where they can stay in their own country,” he told the press conference with Popolizio.

“They reaffirmed the close friendship between the United States and Brazil and pledged to continue working together to address the... crises in Venezuela, their effects on Venezuela’s neighbors, and the need for outside actors, including Cuba, Russia, and China, to stop propping up Nicolas Maduro,” spokeswoman Morgan Ortagus said in a statement.

Earlier Pompeo had become the first US secretary of state to visit Paraguay, formerly ruled as a dictatorship, since 1965, paying tribute to the country’s transition to democracy as an inspiration to the region.

The top US diplomat arrived in Asuncion late Friday after talks with Chile’s President Sebastian Pinera in Santiago that focused heavily on his country’s developing trade relationship with China.