Magistrates to boycott Algeria election in support for protest - GulfToday

Magistrates to boycott Algeria election in support for protest 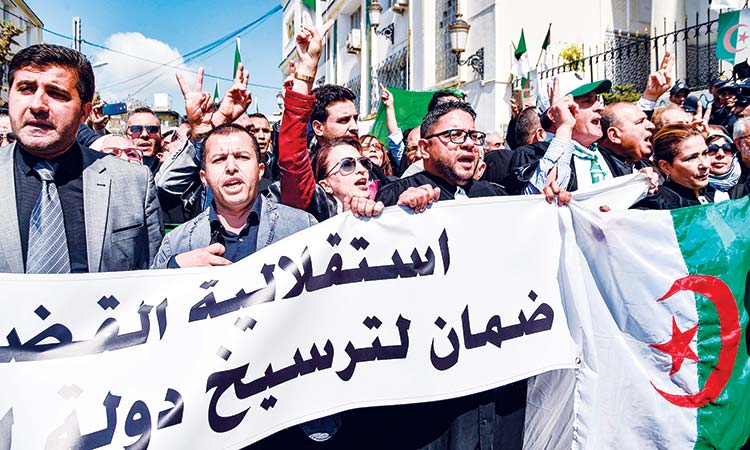 Algerian lawyers and judges rally outside the Justice Ministry headquarters in Algiers on Saturday. Agence France-Presse

Algeria’s magistrates, who play a key role overseeing the country’s elections, said on Saturday they would boycott a July 4 presidential election in support of the protest movement.

Protestors have held vast rallies calling for allies of ousted president Abdelaziz Bouteflika to step down after the veteran leader quit early this month.

They have rejected the July poll, arguing that elections cannot be free and fair if they are held under the same judicial framework and institutions as those of the Bouteflika regime.

Interim leader Abdelkader Bensalah has pledged a “transparent” vote but protestors have called for him to leave office too.

More than 100 magistrates staged a protest outside the justice ministry on Saturday in response to a call by the Magistrates’ Club — a nascent group set up as an alternative to the regime’s National Magistrates’ Syndicate (SNM).

“The Magistrates’ Club has decided to boycott the task of supervising the presidential election,” said Saad Eddine Merzoug, a judge from El Oued in the country’s southeast.

Merzoug said the new club had members at every court in the country, without specifying numbers.

Magistrates play a major role organising votes in Algeria. Notably, they oversee the electoral roll, a frequent source of disputes between the regime and the opposition.

A revision of the register is set to take place later this month, ahead of the July election.

Algerian civil society groups voiced concern on Saturday about toughening police tactics, a day after officers in riot gear clashed with protesters, and reaffirmed their commitment to peaceful pro-democracy rallies.

Police used tear gas and water cannon and scuffled with demonstrators, who in turn hurled stones and bottles, set alight at least one police car and turned large dumpsters into barricades.

Injuries were reported on both sides, and activists raised fears that the standoff has entered a new phase.

“Friday’s mobilisation was different because of the scale of the repression,” according to Said Salhi, vice president of the Algerian League for the Defence of Human Rights.

Salhi noted that the mood was different from early Friday outside the main post office in central Algiers that has become an emblematic protest site.

“It usually starts joyfully at the post office, but there was a desire on the part of the authorities to clear the area,” he said.

Salhi said a turning point had come three days earlier when police had for the first time tried to disperse a student demonstration in Algiers with tear gas and water cannon.

Political scientist Cherif Driss said that, while the demonstrations have continued unabated, “the police are trying to refocus, and are beginning to reduce the public space for expression.”

Driss added however that “the response remains moderate and professional, with mostly water cannons and tear gas. There is no brutal repression.”

Police put Friday’s violence down to “delinquents” infiltrating the crowds, and said 108 people had been arrested, while some protesters also blamed “troublemakers” for the clashes.

Driss said it was too early to tell whether Friday’s clashes were the result of “a strategy to limit demonstrations or a reaction to groups infiltrating” the protests.

The General Directorate of National Security reported that 83 police had suffered injuries. It denied having resorted to repressive tactics and said it was merely maintaining public order.

Several protesters were also injured, and at least one was hit in the chest by what appeared to be a rubber bullet, a photographer.

“The protesters are very committed to the continuation of the movement in its peaceful form,” said Abdelwahab Ferfaoui of civic group the Youth Action Rally (RAJ-Algeria). “It’s the key to success.”

At Friday’s clashes, some demonstrators had placed themselves between rioters and police, raising their hands and chanting “silmiya” (peaceful) until the situation calmed, journalists witnessed.