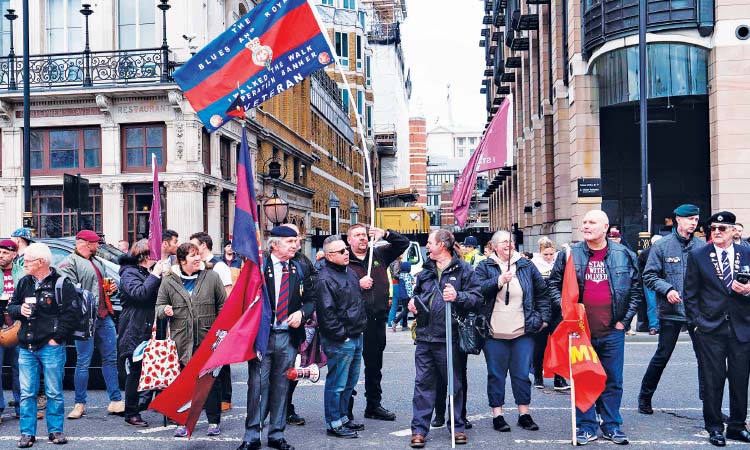 Supporters rally in support of bikers riding in a protest against the Bloody Sunday prosecution of Soldier F in London on Friday. Agence France-Presse

Nigel Farage launched his Brexit Party’s campaign on Friday for the European Parliament elections — a vote Britain was never meant to take part in but which is now being seen as a referendum on its stalled drive out of the EU.

The former UK Independence Party (UKIP) leader was a leading light of the pro-Brexit camp in a bitterly divisive 2016 referendum that voted to pull Britain out of the European Union after nearly half a century.

He now hopes to transform Prime Minister Theresa May’s failure to complete the split by its original March 29 deadline into big gains for Britain’s EU foes.

“We can win these European elections and... start to put the fear of God into our members of parliament in Westminster — they deserve nothing less.” Britain has found itself in the embarrassing position of having to prepare for a European vote three years after deciding to leave the bloc. May’s struggle to get her EU divorce terms approved by parliament forced the other 27 nations at a summit earlier this week to grant Britain a second Brexit extension that could run up to October 31.

This requires the UK to field candidates for the May 23 European Parliament election.

Farage said the chaos showed that Britain’s leaders were “pretty much incompetent”.

Social worker Richard Harris said he signed up to be a Brexit Party member to deliver “the biggest slap in the face for the party political system that we’ve had in generations”.

“We need to break away from the two party system,” the 37-year-old told AFP.

Those trying to do just that include a new group of prominent pro-European lawmakers who broke from May’s Conservatives and the main opposition Labour Party in February.

The Independent Group (TIG) is re-branding itself as “Change UK” and commands 11 of the 650 seats in the House of Commons.

Its overarching ambition is to keep Britain in Europe by forcing a new Brexit referendum that includes the option of reversing the first one’s results.

“We are clear: Brexit is proving to be undeliverable,” Change UK spokesman Chuka Umunna — a telegenic 40-year-old native Londoner who quit Labour — said in an introductory campaign statement.

“We believe the people should have the final say on this matter, and the best option is for the UK to remain a full member of the European Union.” The European vote offers a range of startup parties a rare chance to grab the national limelight — and secure treasured funding should they actually win seats in Strasbourg.

An outfit called The Renew Party kicked off its campaign by promising to give a voice to “people from outside politics” who still view themselves as Europeans and believers in causes such as fighting climate change.

It said it was “ready to speak up for disenfranchised voters who cannot rely on the Conservative and Labour parties”.

The elections pose a headache for both major parties.

May’s Conservatives will have to face supporters frustrated by the party’s inability to lead the way on the biggest issue to face Britain in generations.

Brexit Secretary Stephen Barclay admitted last week that “asking the public to hold elections for an organisation we are meant to have left would damage trust in politics”.

Labour meanwhile is splintered over whether to back a second Brexit vote.

The party includes both Brexit backers and opponents — a division that has left leader Jeremy Corbyn trying to navigate a vague middle ground.

“It is hard to imagine a worse time for Labour and the (Conservatives) to face the only UK-wide proportional electoral contest,” said King’s College London Professor Anand Menon.

“These elections could accelerate the fragmentation of a fragile two-party stalemate, providing an institutional foothold for new parties forged on the issue of Europe.” The idea of a second Brexit referendum is very likely to be put before Britain’s parliament again although the government remains opposed to any new plebiscite, the British finance minister said on Friday.