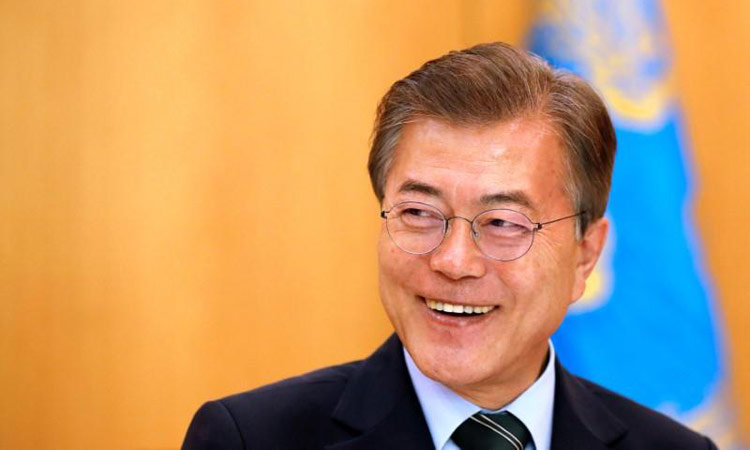 Moon to meet Trump with hopes of getting the North Korea nuclear talks back on track. File photo/ Reuters

Moon arrived in Washington late on Wednesday and is due to hold talks with US Secretary of State Mike Pompeo, Trump’s national security adviser John Bolton and Vice President Mike Pence on Thursday morning before meeting the president at the White House shortly after midday.

Ahead of his trip, aides to Moon stressed the need to revive US-North Korea talks as soon as possible after a second summit between Trump and North Korean leader Kim Jong Un collapsed in Hanoi on Feb.28.

The White House has said Trump and Moon will discuss North Korea and bilateral issues, but US officials have declined to provide details.

Moon has put his political reputation on the line in encouraging negotiations between the United States and North Korea aimed at persuading Kim to give up a nuclear weapons program that now threatens the United States.

Moon has stressed the need to offer North Korea concessions to encourage negotiations, but Washington appears to have hardened its position against a phased approach sought by Pyongyang in which gradual steps would be rewarded with relief from punishing sanctions.

The Hanoi meeting collapsed amid conflicting demands by North Korea for sanctions relief and US insistence on its complete denuclearization.

On Thursday, North Korean state media said Kim had told a meeting of the ruling Workers’ Party of Korea on Wednesday that he would push forward with efforts to make the economy more self sufficient “so as to deal a telling blow to the hostile forces who go with bloodshot eyes miscalculating that sanctions can bring (North Korea) to its knees.”

Last month, a senior North Korean official warned that Kim might rethink a moratorium on missile launches and nuclear tests in place since 2017 unless Washington makes concessions such as easing economic sanctions.

Officials in Seoul were shocked by the breakdown of the Hanoi summit and some South Korean officials blame the influence of Bolton, a hardliner who has long advocated a tough approach to North Korea.

Moon had said he will use the meeting with Trump to discuss restarting US-North Korea talks, advancing a peace process and creating a “virtuous cycle” of improving relations with Pyongyang. He said he hoped North Korea would respond positively.

Moon’s visit to Washington coincides with a scheduled meeting of North Korea’s rubber-stamp parliament and Pompeo said last week he hoped Kim would use the occasion to state publicly that “it would be the right thing” for Pyongyang to give up its nuclear weapons.

North Korea’s state media said on Wednesday that Kim had chaired a politburo meeting on Tuesday to discuss ways to make progress under the “prevailing tense situation.”

Pompeo said last week he was “confident” there would be a third summit between Trump and Kim and that while he did not have a timetable, he hoped it would be soon.

He said US-North Korea diplomatic channels remained open and the two sides have “had conversations after Hanoi about how to move forward,” but he did not elaborate.

Kim and Moon met three times last year and Kim promised to visit South Korea in return for the South Korean leader’s visit to Pyongyang in September. Analysts say a fourth Kim-Moon meeting could help towards another meeting between Kim and Trump.

Moon’s top nuclear envoy Lee Do-hoon said on Friday that sanctions were necessary to deter North Korea from “making bad decisions,” but could not solve all unresolved problems.

At a Senate hearing on Wednesday, Pompeo stressed that “core” U.N. sanctions would have to remain until North Korea’s complete denuclearization, but reiterated past statements that some easing might be possible if it took significant steps.

“I want to leave a little space there,” he said. “From time to time, there are particular provisions that if we were making substantial progress that one might think that was the right thing to do.”

He did not elaborate, but on Wednesday the State Department said Pompeo had met with the head of the U.N. food agency on Tuesday and discussed its initiatives to provide food aid to children, mothers, and disaster-affected communities in North Korea.