‘Golan will be liberated sooner or later’ - GulfToday 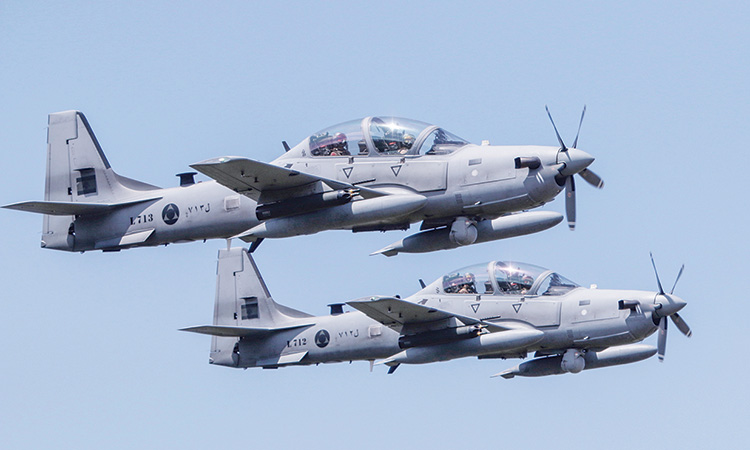 Military aircraft fly during a drill in the northern Lebanese village of Hamat on Thursday. Agence France-Presse

Like many others in this area where the borders of Lebanon, Syria and Israel meet, Kanaan — a member of Chebaa’s municipal council — is angry about President Donald Trump’s decision to recognise Israel’s sovereignty over the occupied Golan Heights, seized from Syria in 1967 and annexed in 1981. The American president has no right to give Israel lands that belong to Syria and Lebanon, he says.

“These are Arab territories that will be liberated sooner or later the way the south was liberated,” said Kanaan standing near Chebaa’s main school as its buses left the compound at the end of a school day. Trump’s move last month has caused concern among Lebanese officials that it would mean also recognising the occupied Chebaa Farms and nearby Kfar Chouba hills, captured along with the Golan, as Israeli territory. Lebanese President Michel Aoun said the US recognition undermines Lebanon’s claim to the territory.

The origin of the dispute over ownership of the Chebaa farms dates back to the French colonial period, when France drew maps of the area without officially demarcating the border.

Following an 18-year occupation, Israel withdrew from south Lebanon in 2000, but held on to the farms. Hizbollah claimed the withdrawal to be incomplete and demanded, along with the Lebanese government, that Israel withdraws. Israel rejected the demands, saying the land was Syrian when it was captured in 1967. Syria has held an ambiguous position and generally refuses to demarcate the border before Israel withdraws from the Golan.

The UN, which doesn’t recognise Israel’s sovereignty over the Golan, has said Lebanon’s claim is to be settled along with the Golan’s fate.

The territory is controversial, even among Lebanese themselves.

Although most Lebanese agree that the Chebaa Farms and Kfar Chouba hills are part of their country, anti-Syrian politicians have suggested it serves as a pretext for Hizbollah to hang on to its weapons and have called for the demarcation of the Lebanon-Syria border, a demand repeated by Prime Minister Saad Hariri on Wednesday even as he said the territory is Lebanese.