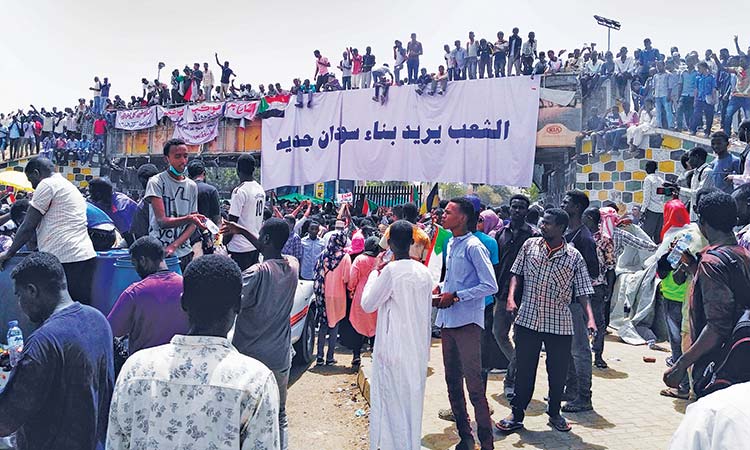 Protesters chant slogans during a rally in front of the military headquarters in Khartoum on Wednesday. Agence France-Presse

KHARTOUM: Thousands of Sudanese protesters were camped outside army headquarters for a fifth day on Wednesday demanding President Omar Al Bashir step down, after the police ordered their forces not to intervene.

Uniformed personnel from Sudan’s National Intelligence and Security Service (NISS) twice tried to disperse the thousands of anti-government protesters camped outside the Defence Ministry, the minister said, citing a report by the

But government soldiers guarding the compound came out both times to protect the demonstrators, firing shots in the air and deploying troops around the area.

In what has become the biggest challenge yet to Bashir’s three decades of iron-fisted rule, crowds of demonstrators thronged the sprawling complex, singing and dancing to the tunes of revolutionary songs, witnesses said. A woman dubbed the protest movement’s “Nubian queen” said she was “very proud to take part in this revolution.”

“I hope our revolution will achieve its goal,” Alaa Salah said after footage went viral of her conducting chanting demonstrators outside army headquarters.

A student of architecture and engineering, Salah said women were “widely participating” in the protests “not only for their rights but for the rights of the entire community.”

“If you see Sudan’s history, all our queens have led the state. It’s part of our heritage.”

On Wednesday, protesters were raising funds to ensure a regular supply of food and water for the crowd.

“Many shop owners and businessmen have offered us free supplies,” said one demonstrator.

Protesters were also putting up five big screens at the site of the rally, an onlooker said.

The anti-government demonstrators have braved regular volleys of tear gas from members of NISS since they began camping at the army headquarters on April 6, protest organisers say.

But for the first time overnight Tuesday they did not face any “threat” from security agents, said a protester who requested anonymity for security reasons.

Witnesses said troops had stationed several vehicles loaded with machine-guns at the gates of the complex, which also houses Bashir’s residence and the defence ministry.

“The soldiers at the complex are also angry after the attacks of tear gas and are determined to prevent them,” another demonstrator said.

On Tuesday, security agents had to abort bids to disperse the crowds when soldiers fired in the air to counter incoming volleys of tear gas from security agents.

“It seems the police too are now with us,” said a protester.

“When we were coming to the army building last night we saw many policemen but they did not stop us.”

The police on Tuesday ordered its officers to avoid intervening against the demonstrators.

“We call on God to preserve the security and calm of our country ... and to unite the Sudanese people... for an agreement which would support the peaceful transition of power,” a police spokesman said in a statement.

As the sit-in continued at army headquarters, the acting chief of the president’s ruling party, Ahmed Harun, backed calls by loyalists to hold a pro-Bashir rally.

“The National Congress Party’s executive bureau supports the national dialogue partners’ initiative to organise a gathering to be seen by all the people on Thursday,” he said in a statement.

“I call on all members of NCP across the state of Khartoum to participate in this rally.”

Bashir has remained defiant in the face of protests, which first erupted on Dec.19 in response to a government decision to triple the price of bread.

They quickly mushroomed into a nationwide campaign against the president’s rule with rallies held across cities, towns and villages.