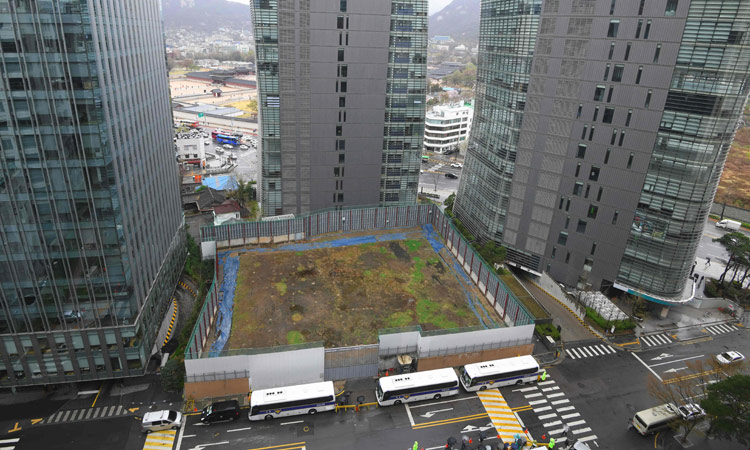 Authorities in Seoul have cancelled the permit for a new Japanese embassy building due to construction delays. Jung Yeon-Je / AFP

Authorities in Seoul have cancelled the permit for a new Japanese embassy building citing construction delays, local officials said on Wednesday, with relations between South Korea and Tokyo strained by historical disputes.

The neighbours are both democracies, market economies and US allies faced with an increasingly assertive China and the long-running threat of nuclear-armed North Korea.

But their own ties have remained icy for years due to bitter rows stemming from Japan's brutal 1910-45 colonial rule of the Korean peninsula, with forced labour and wartime sex slavery key examples.

A statue of a “comfort woman” symbolising the Korean women forced to work in Japanese military brothels mostly during World War II stands across the road from the embassy plot.

Since 1992 campaigners have held weekly rallies at the site to demand a “full, heartfelt apology” for wartime sex slavery from Tokyo.

The 1,382th such gathering took place on Wednesday, with activists surrounding the statue.

The previous embassy building was demolished some years ago, with staff moving into offices in the neighbouring high-rises, and the plot is now a patch of bare earth behind a high wall, vines growing through the surrounding barbed wire.

City authorities gave permission for a new six-storey building in 2015, the year Seoul and Tokyo signed a controversial deal to settle the wartime sex slavery issue.

But construction — which under South Korean law must start within a year of a permit being received — was repeatedly delayed.

Japan argues that the “comfort women” statue is against the 2015 bilateral agreement, under which Tokyo offered an apology and a one-billion yen payment.

But South Korean President Moon Jae-in said last year that the deal had been signed by his ousted predecessor Park Geun-hye without consulting the Korean victims and disbanded a foundation set up with the Japanese funds.

An official at the Jongno Ward Office in Seoul said: “We had a meeting with Japanese officials in February, and they said they will accept the revocation of the permit as they cannot start the construction work due to circumstances in their home country.”

The dovish Moon — who has brokered talks between Washington and Pyongyang — has stressed the struggle against Japan is at the heart of national identity in both Koreas.

This year marks the 100th anniversaries of the March 1 Independence Movement and the foundation of the Korean provisional government, and South Korea is pulling out the stops to commemorate them both.

The centre of the capital is currently festooned with large government-produced posters of heroes of the fight for independence.