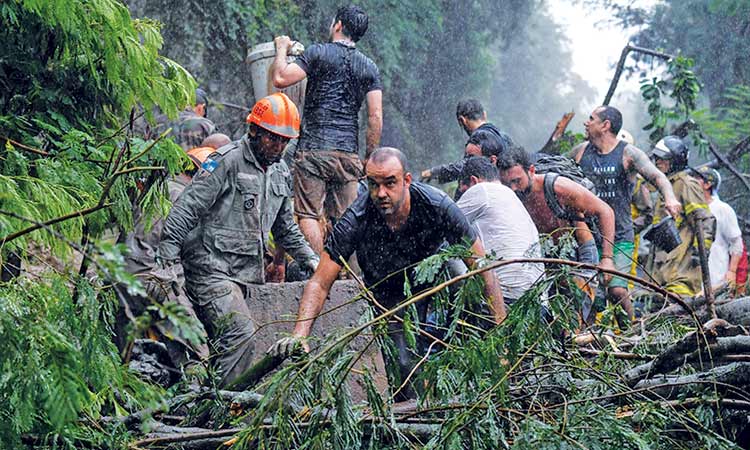 Heavy rain that began on Monday evening and continued into Tuesday triggered flash floods, turning some streets into raging rivers, toppling trees and sweeping away cars as the state emergency agency declared a crisis.

The southern zone of the city, which includes Copacabana, Ipanema, Leblon and Leme as well as several impoverished favela areas, has been hardest hit.

Heavy runoff from neighbouring hills gushed through some apartment buildings and shops, leaving behind mud and debris.

The bodies of three people were found in a car buried behind an upmarket shopping centre on Tuesday afternoon, while two women died when a house in a favela collapsed, the Fire Department said in a statement.

One man died after he was electrocuted in a house, while another was caught in a torrent of water.

Cars and buses were crushed by fallen trees, and pavement was ripped up by the force of the water.

Many people returning home on Monday evening or trying to go to work on Tuesday were drenched as they waded through knee-deep water in the relentless downpour.

Some people climbed fences to avoid flooded streets, while others tied plastic bags around their feet to protect themselves from the polluted water.

Meanwhile, blizzards and windstorms will punish the US Plains and Midwest on Wednesday and into Thursday as a powerful storm threatens more flooding in areas such as South Dakota’s Pine Ridge Indian Reservation and farms along the Missouri River.

High spring temperatures will give way to heavy snow, gale-force winds and life-threatening conditions across a swath of the central United States running from the Rockies to the Great Lakes, according to the National Weather Service (NWS).

Pueblo, Colorado, hit 30ºC on Tuesday, but will drop down to minus 4ºC by early Thursday. Similar temperatures are forecast in Denver.

“This is potentially a life-threatening storm,” Patrick Burke, a meteorologist with the NWS’s Weather Prediction Center in Maryland, said early on Wednesday.