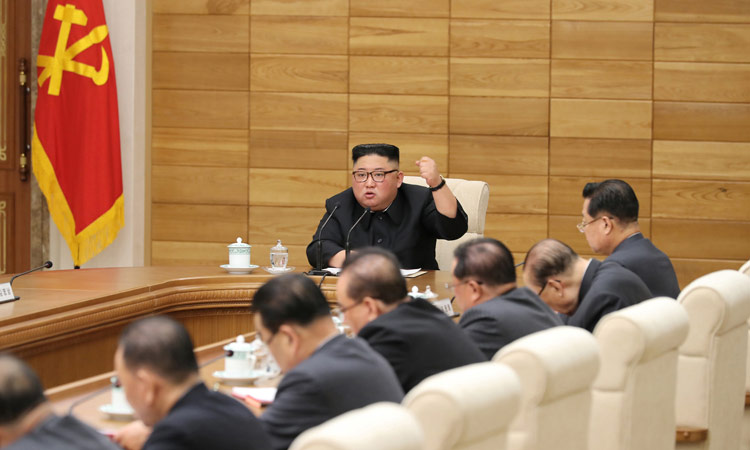 The plenary session, which occurs regularly, comes in the wake of Kim’s second summit with US President Donald Trump in February in Hanoi, where the two leaders failed to make any agreements over North Korea’s nuclear weapons programme or international sanctions.

The ruling party officials will gather to “discuss and decide the new orientation and ways of struggle in line with the need of the prevailing revolutionary situation,” state news agency KCNA said on Wednesday.

In a meeting of the Political Bureau of the Central Committee of the Workers’ Party of Korea on Tuesday, Kim told officials they need to work more responsibly to carry out his strategy in the face of international pressure.

“The Supreme Leader urged the need for leading officials to fully display a high sense of responsibility and creativity, and the revolutionary spirit of self-reliance and fortitude in an attitude befitting the masters of the revolution and construction under the prevailing tense situation and thus follow through on the new strategic line of the Party,” KCNA said.

At a plenary session last year, Kim formally announced a “new strategic line” of focusing on economic progress and improving North Koreans’ lives, rather than the previous two-pronged approach of both economic and nuclear weapons development.

Despite his failure to secure any sanctions relief at the Hanoi summit, Kim has continued to highlight his economic push in recent weeks.

Over the past week state media published images and reports of Kim visits to at least four economic projects in five days, including a remodelled department store, tourist resorts, and an economic hub near the border with China.

North Korea’s rubber-stamp parliament is scheduled to meet on Thursday.

“In a situation where it’s difficult to take a completely new path, they’re emphasising self-reliance to show the US that they can go their own way,” said Shin Beom-chul, a senior fellow at the Asan Institute for Policy Studies in Seoul.

“North Korea is targeting the US, sending a message that we will not back down, so the US must change its stance.”