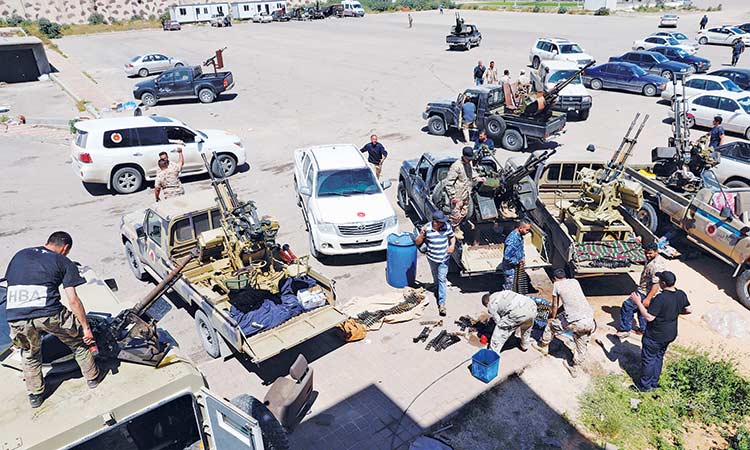 Members of Misrata forces prepare themselves to go to the front line in Tripoli, Libya, on Tuesday. Reuters

UNITED NATIONS: The UN Security Council will hold urgent closed-door consultations on Wednesday on the crisis in Libya, where fighting has derailed UN-led efforts to prepare for elections.

UN envoy Ghassan Salame will brief the council on his decision to postpone a national conference aimed at drawing up an election roadmap, diplomats said.

Thousands of people have fled Tripoli after forces under the command of Khalifa Haftar, who controls part of eastern Libya, launched an offensive last week to take the capital.

“We cannot ask people to take part in the conference during gunfire and air strikes,” Salame said on Tuesday in announcing the postponement of the conference that was due to open on Sunday.

Tripoli is controlled by a UN-backed unity government, but its authority is not recognised by a rival administration in the east, allied with Haftar.

Britain and Germany, which holds the council presidency, called for the meeting a day after UN Secretary-General Antonio Guterres called for an immediate halt to the fighting.

Oil-rich Libya has been rocked by violent power struggles between an array of armed groups since the Nato-backed overthrow of dictator Moamer Qadhafi in 2011.

Rival leaders agreed last year to hold elections before Dec.10, 2018 under a French plan, but that vote never materialised.

The national conference, which had been scheduled for April 14-16 in the central city of Ghadames, aimed to fix dates for legislative and presidential elections, and work towards a new constitution.

Casualties from the battle for Libya’s capital mounted on Tuesday and the United Nations moved dozens of migrants to safety from a detention centre in the south of the city where fighting had raged nearby.

The fatalities were mainly fighters, although they also comprised nine civilians, including two doctors, the WHO said.

In central Tripoli, while there were no signs yet of military and security vehicles or personnel on the streets, shops and cafes were closing earlier than usual in the evening and residents were apprehensive about the prospect of violence.

“War is war: I am not afraid of the Libyan National Army, but I am afraid of the destruction that will never be reconstructed,” said Mohamed Salem Al Sharwe, a taxi driver in Tripoli.

The LNA forces of Khalifa Haftar — a former general in ousted strongman Moamer Qadhafi’s army — seized the sparsely populated but oil-rich south earlier this year before heading toward Tripoli this month.

They are fighting on the southern side of the city, where witnesses said on Monday afternoon the LNA had lost control of a former airport and withdrawn down the road.

The government of Prime Minister Fayez Al Serraj, who has run Tripoli since 2016 as part of a UN-brokered deal that Haftar boycotted, is seeking to repel the LNA with the help of armed groups from Misrata.

Serraj’s forces carried out an air strike on an LNA position in the suburb of Suq Al Khamis on Tuesday, a resident and an eastern military source said, without giving more details.

The renewed conflict threatens to disrupt oil supplies, boost migration across the Mediterranean to Europe and scupper UN plans for an election to end rivalries between parallel administrations in east and west.

Libya has become the main conduit for African migrants and refugees trying to reach Europe, with many detained if their journey fails and they are sent back. Some 5,700 refugees and migrants are trapped in detention centres in conflict areas, UN agencies say.

The UN refugee agency UNHCR said that it had relocated more than 150 refugees from the Ain Zara detention centre in south Tripoli on Tuesday to a UNHCR facility in a safe zone.

There had been heavy clashes near the Ain Zara centre in recent days, the agency said in a statement.

“Refugees told UNHCR that they were frightened and worried about their safety, given ongoing fighting in the vicinity, and that they were left with minimal supplies,” the statement said, adding the agency was working to ensure other detained migrants and refugees were not in harm’s way.